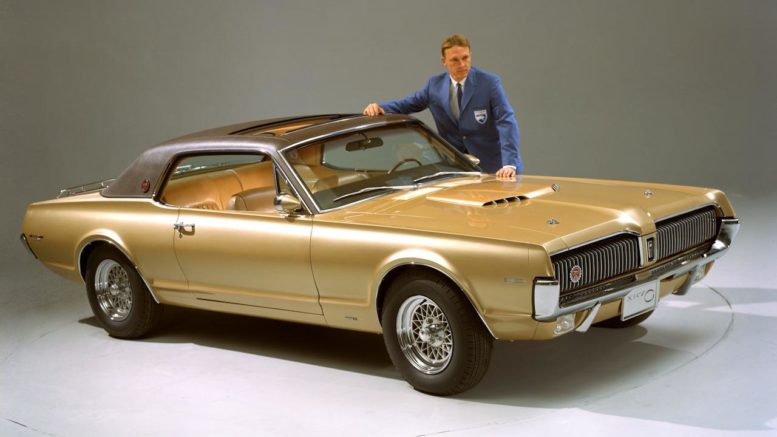 The 1968 Mercury Cougar XR7-G was to be the equivalent of the Shelby Mustang. It featured three engines, a 302 small block, a 390 big block initially available from Hertz rentals, and the 428 Cobra Jet. This Mercury promo shows Gurney with the XR7-G in Cobra Jet trim. (Compliments Ford Motor Company)

Q: Greg I enjoy your old-time articles, especially when you add your experiences and mention the legends of racing. I am still a Mercury fan even though Ford dropped the brand long ago. I especially remember the 1968 Dan Gurney XR7-G Special Edition Cougars.

My question is do you feel the Mercury Cougar is as collectible as the Ford Mustang, especially since they made less Cougars than Mustangs during the muscle car days of the 1960s and early 1970s? Also, can you give us your thoughts on the late Dan Gurney’s racing days and those special Gurney Special Edition Cougars? Thanks, Hal from Hyannis, Mass.

A: Hal, I’d be happy to. Before we get into Dan Gurney’s career, I’ll answer your first question about the Mustang and Cougar collectability and popularity. For whatever reason, even in a side-by-side comparison with equal equipment, a Ford Mustang usually generates not only more attention, they usually end up fetching more money at the auctions from serious collector enthusiasts.

This reality is similar to the 1968 to 1972 Camaro and Firebird comparison whereas Camaros usually generates more interest than Firebirds. However, unlike the Cougar and Mustang, which shared mechanicals, the initial Camaros and Firebirds did not share the same engines. Back then, autonomy still reigned supreme at General Motors, and if you bought a Buick, Olds, Pontiac, Cadillac or Chevrolet, they all had different in-house designed engines.

Over at Ford and Mercury, the Mustangs and Cougars, regardless of model, shared similar engines right on through the final car produced by the Mercury division at the end of 2010. Being that the Mustang pre-dated the Cougar by three years (1964 debut for the Mustang versus 1967 for the Cougar), it could be a major reason the Mustang is more popular than the Cougar with collectors.

Aligned with Ford for many years during his racing career, Dan Gurney’s direct ties to Mercury’s Cougar came about when Gurney was appointed to manage Mercury’s Cougar SCCA Trans Am race team in 1967. Gurney’s Cougars won four of the series 12 races that first year and resulted in two special Cougar models bearing his name.

The XR7-G you mention is basically a Shelby Mustang sibling, featuring V8s in 302, 390 or 428 Cobra Jet configurations. These Cougars to this day are the most sought after as only 617 were produced. Of the 617, only 14 were delivered with the 428 Cobra Jet engine.

These 1968 XR7-G Cougars are not to be confused with the 1967 and 1968 Cougar Dan Gurney Special editions, which are completely different cars. These Gurney Special Editions featured a decal with his signature, special turbine wheel covers, chrome engine kit and a 289 V8 under the hood. Both of the ‘67 and ’68 Gurney Special Edition Cougars were mostly “regular” Cougars with the added and non-inspiring amenity upgrades. Mercury’s biggest advantage was using Gurney’s name and his achievements in its advertisements.

Thus, the 1968 XR7-G is the “real deal” Cougar collectible and will continue to rise in value as the Cobra Jets are already easy six figure auction cars. The ’67 and ’68 Gurney Special Editions, meanwhile, are not generating any big numbers.

As for Gurney’s racing accomplishments, few if any compare. Gurney passed away Jan. 14, 2018, and will forever be remembered as one of the very best race drivers and race car constructors in the world. He was a Long Island, New York, native who moved with his family to Riverside, Ca. after graduating high school. Known as a driver who could win in any car he drove, his personal driving career lasted 15 years where he rose to fame quickly.

During his career, Gurney drove and won in Formula 1, the Sports Car World Championships, Indy Car, NASCAR, Can-Am and Trans-Am. He dominated the NASCAR Riverside, Ca. road races behind the wheel of the Wood Brothers Fords winning four times in five tries in the 1960s.

Yet for however popular Gurney was in the Wood Brothers stock car at Riverside, he is best remembered for his efforts in Formula 1 and Indy Car racing, where his Eagle chassis race cars were some of the best in the business. In his career, he personally drove to four Formula 1 wins for three different manufacturers (Porsche, Brabham and his own Eagle Westlake cars), a most notable achievement. Another of his biggest victories came in 1967 at the 24 Hours of Le Mans with co-driver AJ Foyt in a Ford GT40.

Thanks for your questions and hope this all helps.

(Greg Zyla is a syndicated auto writer who welcomes reader input and questions on collector cars, auto nostalgia and motorsports at greg@gregzyla.com).