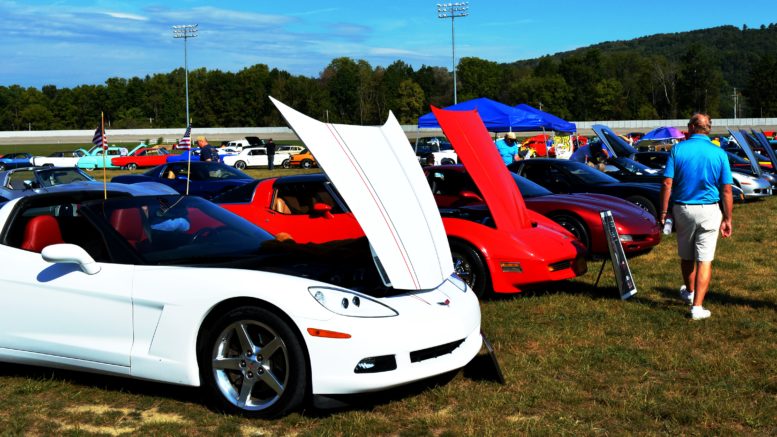 Just about every car show in America features some sort of “Corvette Corral,” where Corvette owners gather, display and discuss in earnest their cars with fans and fellow Corvette owners. (Greg Zyla photo) 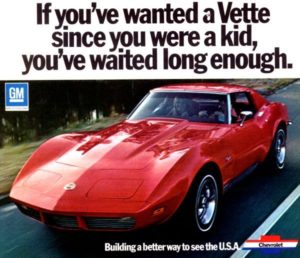 Advertisement for a 1975 Corvette L-48, known for its low horsepower of just 165-horses. (Compliments Chevrolet)

Q: Hi Greg and I have a question about the price ranges of the Corvettes, especially a 1975 Corvette with the L-48 I am currently considering. I know these Corvettes are probably the slowest C3 Corvette out there from an acceleration standpoint, but do you feel it is a good Corvette to purchase over the long haul? I read your columns on the GateHouse Media sites every week. Thanks, Mike from Philadelphia, Pa.

To answer your question, let’s first address what you mean by the “long haul.” To me, you’re asking if the car will increase in value more so than anything else. So, I’ll say in my opinion this C3 generation (1968 to 1982) will one day take on a more aggressive price trend upwards, but will never be one of the “high-priced” units like the big blocks or strong small-blocks from 1965 to 1972.

Unfortunately, the 1975 L-48 Corvette is the lowest horsepower C-3 generation ever built, producing just 165-horsepower from its overly muffled and smog controlled engine. This was the year when all of the smog controls were fully mandated, resulting in devastating results for performance enthusiasts.

The folks at Corvette tried their best to sell the smog controlled 1975 Corvette to consumers. Explained in this ad is the high-energy ignition systems and even the catalytic converter, the latter another mandated item that increased exhaust backpressure and thus reduced horsepower. (Compliments Chevrolet)

Muscle car fans were in a tizzy because the “real” muscle cars of the 1960s and early 1970s were still there, but the gas crisis combined with lower grade fuels made owning them a questionable purchase for everyday driving. This is why you could buy a Dodge Challenger 383, Mustang 428 or 396 Chevelle at blowout prices. Used car dealers wanted them off their lots as quick as possible in 1975 as every time the price of a gallon of gas went up, the price of the great muscle cars went lower in unison.

So, to the very few who had a keen vision of the future (not many of us back then) and cash to work with, this time period offered a chance to own a performance car that could be worth $100,000 down the road.

To sum up this part of my answer, let’s agree that the government mandated air quality engine pumps and smog accessories, combined with low octane fuels and high insurance rates, effectively killed the powerful engines with each one of the noted muscle cars of the era falling by the wayside.

In the L-48 Corvette’s case it was no different.

However, government mandates aside, here’s why a 1975 Corvette L-48 is a good buy, especially at today’s lower prices. Thanks to the now multi-billion dollar aftermarket industry and its SEMA guidance (SEMA was originally the Speed Equipment Manufacturing Association and today is called Specialty Equipment Market Association), any L-48 lacking in power can quickly be assisted by a few bolt on performance products that will instantly add an easy 75 to 100-horsepower to the 165-horse rated L-48.

Being that these C3 generation Corvettes all utilized a carburetor for induction, not counting the final year 1982 C3 Corvette that came with the new twin port throttle body fuel injection, a quick trip to the speed shop was in your best interest. Specifically, the L-48 came with an 800 CFM Rochester Quadra jet carburetor, and many owners switched over to double pumper Holley carbs for instant upgrades. Coupled with a set of headers, aluminum intake and a more major upgrade cam and lifters upgrade, the L-48 small block really came to life.

A quick note on the Quadrajet, as this carburetor has been around since 1965 and powered many of the GM muscle cars, along with numerous Chrysler and Ford engines, too. However, the Quadrajet wasn’t invented as a performance carb thanks to its small primaries and extra-large secondary’s. The Quadrajets from 1965 to 1972 were 750 CFM, while the 800s appeared in late ’72 and forward.

So, there you have it Mike. If you look at the auction sites like eBay Motors and the collector car magazines like Hemmings or Auto Roundup, you’ll find some really great deals on 1975 to 1978 Corvettes, all powered by these lower horsepower, Quadrajet equipped Chevy 350 engines. NADA retail listings are at a low $10,350, medium $14,550 and high $23,600. Remember the classic car prices are usually not what most consumers pay as current live auction prices are in the $8,500 to $10,500 for a decent condition, but not great, ‘75 or ‘76 L-48 Corvette.

I know these prices dwarf other C3 generation Corvettes, but if you want to get into this hobby economically these L-48s offer a great entry point to join the tens of thousands who attend car shows in Corvettes nationwide. Good luck with your search for a Corvette.

(Greg Zyla is a syndicated auto columnist who welcomes reader questions and input on collector cars and old-time racing at greg@gregzyla.com or at 303 Roosevelt St., Sayre, Pa. 18840.)