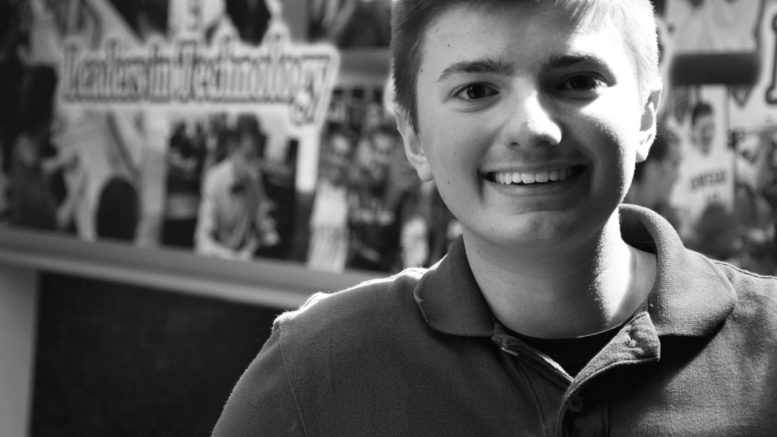 Ronald James “R.J.” Seymour is this year’s Owego Free Academy (OFA) salutatorian. He’s carried a 99.7 grade-point average throughout high school and he will be attending Binghamton University in the fall. He plans to study biological sciences and later attend medical school “to become some kind of a doctor,” he said.

The son of Ron and Linda Seymour of Apalachin, R.J. says his academic success has been “the ultimate exercise in time management. The TV is on, but it’s background noise. And I’ve got lists for everything – ‘go see someone at a certain time, that sort of thing.’”

And like many teens today, he’s always got his phone.

“I don’t find my phone a distraction, personally. If I ever do, I put it on ‘do not disturb.’ It’s helpful to have, most of the time,” he said. “You just open Google, and there you go.”

R.J. isn’t just a student at OFA. He’s also an employee, for two years now working as an IT student technician. “I average about 14 hours a week,” R.J. said. Sometimes he works after school, sometimes during school. “I can work a bit during my free times. It can make it easier when you’re helping someone face to face.”

A typical call for technology assistance, he explained, is pretty straightforward. “My computer isn’t working, can you fix it? Or, I can’t get on the Internet, can you help?”

He helps in other ways, too. Around the community, for example. “I ring (the bell) for the Salvation Army in the winter,” R.J. said. And he advises the Blue Horizon balloon launch club, with that group’s use of technology.

R.J. said he’s not a competitive athlete. He enjoys skiing, but recreationally.

“I’m passively competitive,” he said, grinning. That line elicited a whole-hearted response from OFA classmate Bella Coleman, who was sitting nearby. “He’s competitive – with himself,” she offered.

The laid-back R.J. nodded, agreed, and explained. “I set standards for myself and if I don’t reach them? I’m like, ‘OK, let’s get going here.’”

One way R.J. has challenged himself this school year has been as part of Broome-Tioga BOCES New Visions, in which he has spent his senior year mornings away from OFA. Two days a week he’s at Lourdes Hospital. Three days he’s in a classroom setting either at Johnson City High School, or at the BOCES JC Learning Center.

“It’s a great program, and I’ve gotten a lot of exposure to different (medical) programs,” he said. “I’m in the Health Academy. It’s really hands-on. I’ve had the opportunity to follow doctors on their rounds and see them at work, ask questions. I love it.”

Be the first to comment on "OA is You: R.J. Seymour"