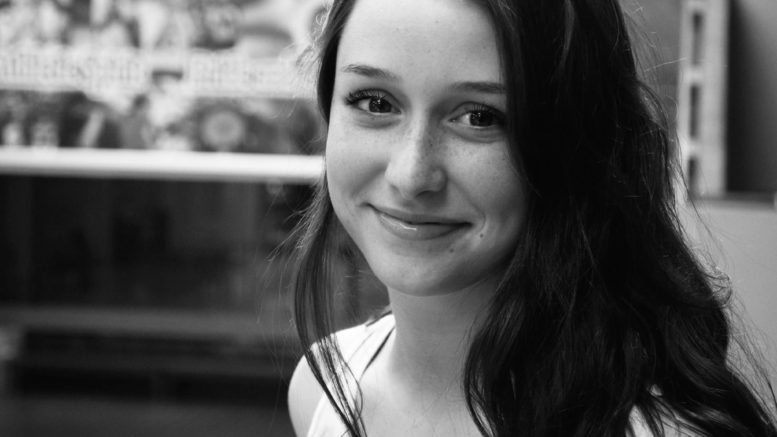 Ask Bella Coleman what it took for her to be this year’s Owego Free Academy (OFA) valedictorian, and the answer might sound cliché. “It’s a lot of hard work. And a dedication to doing homework,” she said. “I do a lot of school work at home.”

Which hasn’t left time for much distraction at home. “I haven’t really watched a TV show since last summer. That’s really the only time I actually sit down and watch TV,” Bella said. Then she mentioned another key to her 100.0974 high school grade-point average. “I have lists on my phone all the time.”

The daughter of Holly Coleman and Michael Coleman, both of Owego, plans to attend the University of Virginia in the fall to study biomedical engineering. “I’ll probably go to med school, and I hope become some sort of doctor,” she said.

Bella has found success throughout high school. In her junior year, the OFA volleyball team won the state title. This year, the team went back to the state finals, falling just short in the championship. (For those wondering, she will not play volleyball for Virginia, although she suspects she’ll play the game at the club level.) Last fall she was named Homecoming Queen. And now she’s achieved the No. 1 spot in her graduating class, leading the procession on June 24.

But when she was 11, she encountered a major detour – Hodgkin lymphoma.

“We were skiing with my Dad one weekend and I had a pretty bad accident,” she explained. “We’re in the car, going back home, and I’m checking myself out and I notice the one side of my neck was bulging a little. I showed my Dad and he laughed and said, ‘Yeah, you really messed yourself up.’ That’s just how our family is.”

Bella eventually had an MRI. It looked like a hematoma, she said, but her Mom’s a nurse and the first feedback was nothing earth shattering. So they waited a bit for things to improve. When they didn’t, there were more tests and a second diagnosis determined it was serious.

“This kind of Hodkin’s doesn’t usually happen in kids, and it really doesn’t happen in girls,” Bella said, smiling. “So here I was – different.”

Through three months of chemotherapy and losing all her hair, Bella said she didn’t ever doubt that she’d be healthy again. Hearing her talk about it now, she made it seem like more of an annoyance at school than anything else.

“Everyone got to wear hats in middle school,” she said, explaining that since she had no hair and was allowed to wear a hat, the administration decided there would be solidarity. “It was so embarrassing, so overkill. They got t-shirts that said ‘COURAGE’ and “No. 1” with a ribbon on the sleeve,” she added, shaking her head. She might have rolled her eyes a bit, too. “It was so overkill.”

Looking back, Bella said she’s glad she was so young when all that happened. “I just kept saying, ‘I’m going to be fine.’ I had a surgery, then the next day I was playing soccer. I told everybody I was fine.”

She played soccer until the ninth grade, and then switched to volleyball. “I started really late. I like soccer, but there were a lot of injuries, and I liked the different team approach in volleyball.”

Bella also played basketball since she was four years old, she remembered. “My dad loves basketball, so I had a basketball in my hands as soon as possible,” she said. She also played lacrosse as a freshman. “I was on varsity when we won the sectionals,” she recalled. “That was really fun.”

As an athlete who visited the trainer’s room many times over her high school years, attending to her bumps and bruises, today Bella finds herself back there again, but playing a different role. “I’ve been doing that since the beginning of spring,” she said of the athletic trainer-shadowing program. “Our athletic director started the program and it is a really good experience. I can’t do anything for actual treatments, but I help with setting up, applying heat, observing treatments. That sort of thing.”

In the OA community, she’s been involved in “a lot of little things, many of them through volleyball.” She said she’s also volunteered with the Special Olympics, but that most of her given time and effort has been in what she called “a lot of one-timers.”

Plenty of study, real homework diligence, athletic success and community involvement all factor into Bella Coleman’s valedictorian achievement. But she has one more bit of advice for those following her.

“Social media – it’s a popularity contest for sure. It’s easy to get sucked into the drama, because it’s always there and available,” she said.

“But you have to know when to leave it alone. There have been weeks when I have deleted all the apps, and I’ve focused on what really matters – personal relationships.”

Be the first to comment on "OA is You: Maeve ‘Bella’ Coleman"