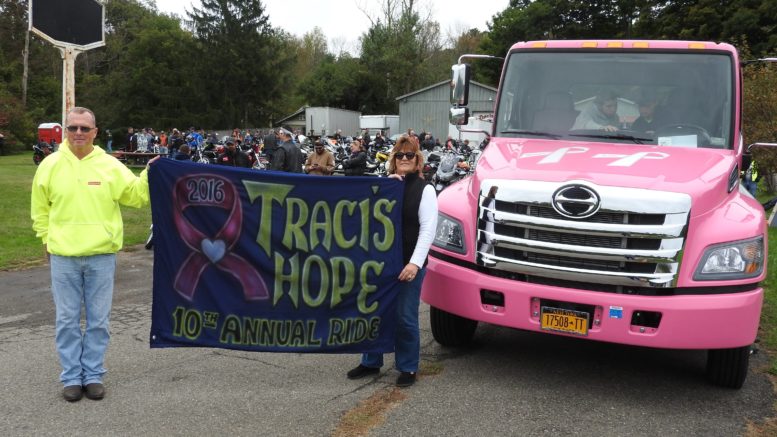 Billie Jo Signs Wheeland and Bill Chandler hold up the Traci’s Hope flag that has accompanied the ride each year. They are pictured just prior to the ride’s departure last Saturday. Pictured alongside, is the pink tow truck recently acquired by Joe Karpel, and in honor of his nieces who are battling breast cancer. (Photos by Wendy Post)

The 10th annual Traci’s Hope motorcycle ride had a great turnout last Saturday, and mostly due to the rains that held off for the morning run. For the close to 100 motorcyclists who turned out for the ride, which ends at the Firemen’s Field Day grounds for the main

Traci’s Hope event, they were met with news from the organizers, and were introduced to a tow truck recently acquired by Joe Karpel that is in honor of his nieces, who are battling breast cancer.

At approximately 12:30 p.m., and just prior to the ride departing from 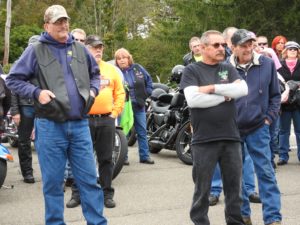 Hiawatha Motorcycles, located on Route 434 in Apalachin, N.Y., Billie Jo Signs Wheeland, who has organized the ride with her husband Don for ten years, announced that it would be their last year of hosting the ride from their Apalachin location.

participants who gathered, the ride will be organized by Paul and Janet Evenson, owners of Route 38 Bar and Grill in Apalachin, N.Y. Wheeland told the riders that beginning next year, the ride would gather and depart from the Newark Valley location. 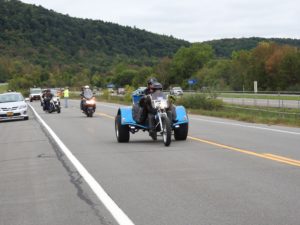 “I love it, but I’m passing the torch,” said Wheeland about the ride.

Wheeland is grateful for the support the ride has received over the years, and will continue to support the efforts that Traci Gibson’s legacy leaves behind. 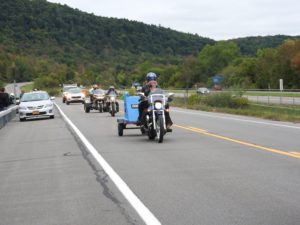 Two of those assisted by Traci’s Hope are Marge 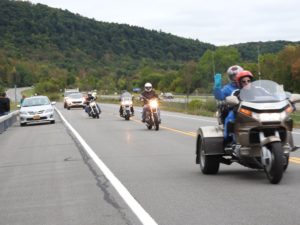 Mills and Kate Karpel. As the Traci’s Hope ride was ready to depart, their uncle, Joe Karpel, explained that Marge has stage IV cancer and is currently in the hospital. Kate, he explained, has stage II breast cancer and underwent another chemotherapy treatment last Thursday. 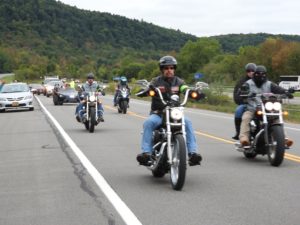 In their honor, Karpel brought his newly acquired tow truck to the ride last Saturday, a pink tow truck with the breast cancer ribbons painted on the hood. According to Karpel, he picked up the truck two days prior to the ride from Robert Greene in Monticello. 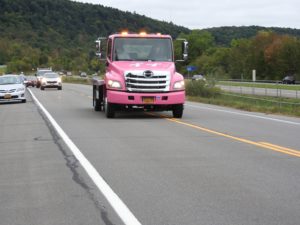 Traci’s Hope motorcycle ride departs last Saturday. Pictured, is is the pink tow truck recently acquired by Joe Karpel, and in honor of his nieces who are battling breast cancer.

When asked if his nieces knew about the truck, and his participation in the Traci’s Hope ride and event, Karpel stated that they did. “They were in tears,” said Karpel, adding, “They love it.”

Karpel also announced a generous contribution he will be making to Traci’s Hope each month for the next year, with the first check grasped firmly in his hand last Saturday.

Karpel also spoke briefly about BCRAdvantage plus cancer genetic testing through Quest Diagnostics that identified the BRCA1 gene; a mutation that causes a predisposition to Hereditary Breast and Ovarian Cancer. In fact, Karpel himself posses the gene, and has a higher risk of developing cancer.

According to documentation that Karpel received regarding his testing, it stated that the two “breast cancer predisposition genes” are BRCA1 and BRCA2. This means that the person who has the mutation or gene change has a 50 percent chance of passing it on to his or her children.

With this information, Karpel was advised that his children have a 50 percent chance of inheriting the mutation.

This type of genetic testing is not new, and its awareness grew after Angelina Jolie publicly announced she tested positive for the BRCA1 gene and elected to undergo a double mastectomy. The “Angelina Jolie effect,” as it’s popularly referred to, is not just a celebrity-induced fad; it has brought awareness to the greatly increased cancer risk for carriers of BRCA1 and BRCA2 mutations.

To learn more about this specific testing, contact your physician.

To learn more about Traci’s Hope and the services offered within the community, visit www.tracishope.com. To view more photos from the Traci’s Hope event and ride, “Like” The Owego Pennysaver on Facebook.

Click here to view photos from the Traci’s Hope event at the Apalachin Field Day grounds.

Be the first to comment on "Traci’s Hope Ride has good turnout; pink tow truck tells a story"