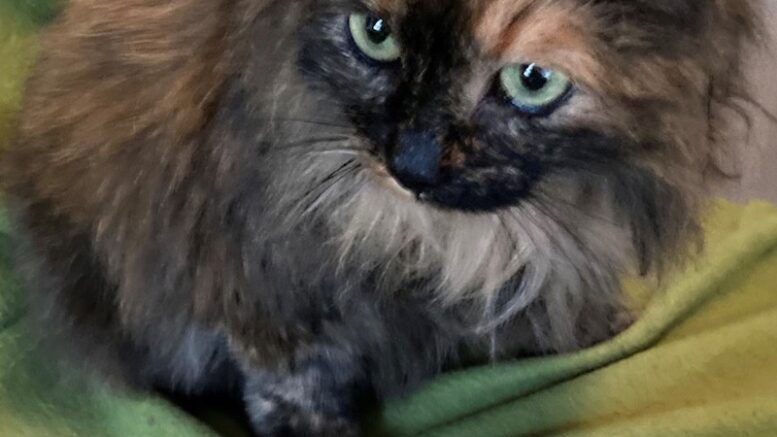 In the spring of 2020 a German Shepherd named Suzie came home with this beautiful little fur ball kitten in his mouth. The kitten was crying and needed help, so Suzie rescued her by taking her home to Mom.

Of course Mom, named Theresa, could not say no to the kitten she later named Fluffy, so she became Suzie’s baby sister. Suzie and Fluffy became best friends. They did everything together. Unfortunately, though, not too long ago, Suzie passed away and Fluffy was left all alone in the house.

Over the years Theresa was in and out of the hospital for weeks at a time. In December of 2022 Theresa was hospitalized and then went to a nursing home in Waverly. The Chief of Police, a Good Samaritan named Dan, offered to care for Fluffy, feeding her every day and stopping in to say hi.

Theresa passed away around Christmas, and Fluffy had nowhere to go.

A friend of Theresa knew about Gail and her rescue and called her to see if she would be willing to find Fluffy a home. Of course Gail said yes.

So here she is, a ball of soft fur waiting for that special family to love her and give her the attention she has so been lacking. She has been introduced to other cats and does not seem fond of them, but she probably would get along well with a cat-loving dog (like Suzie). She is being vetted on Jan. 22 and will be available for adoption after that.

Fluffy just wanted to add that she is very friendly and likes people very much.  She is longing to have a family that has time for her, and she will be a constant companion to the right person or family. If you are interested in possibly adopting her after her surgery and shots are done with please call Gail at (607) 689-3033 and tell her you are interested in that adorable Fluffy.

If you would like to donate to help Gail with all the vet bills that have been building up, please send a donation to Gail Ghinger, P.O. Box 435, Owego, N.Y. She will really appreciate your help!