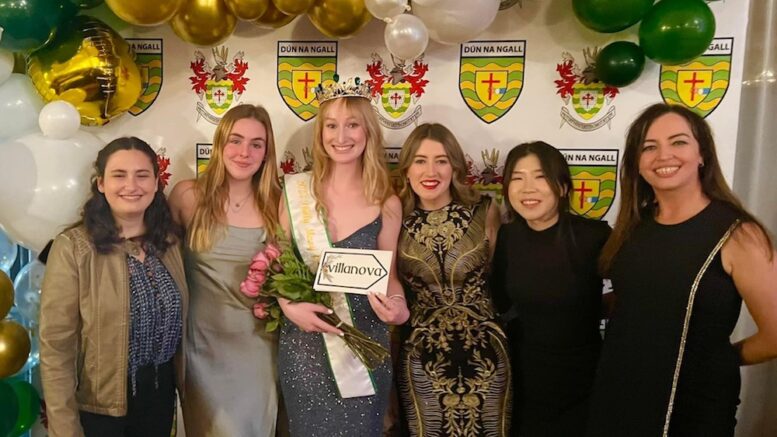 AnneMarie Mantei is surrounded by friends at last month’s Donegal Ball in Philadelphia, where Mantei was crowned a “Mary from Dungloe” during the organization's annual event. Provided photo.

Spring is right around the corner after a milder winter, for most, and one Tioga County resident is blasting out of her senior year at Villanova University and taking her studies a step further. As a Global Studies Major with a focus in Irish studies, AnneMarie Mantei is shooting for the ultimate personal experience to compliment her educational goals.

Last month, Mantei was persuaded to enter the “Mary from Dungloe” pageant at the Donegal Ball in Philadelphia, and ended up earning the spot to represent Philadelphia in this year’s competition at the International Festival planned in Ireland this summer. As one of many international contestants, Mantei will travel to Ireland where she will compete for the international title.

“It’s a bit like the Miss America pageant,” said Mantei, describing the various aspects of the competition. During the December pageant, Mantei reigned above the other contestants.

“I won,” said Mantei, adding that her friends, Sarah Gallagher and Alswyn Hennessy-Doyle, encouraged her to sign up. 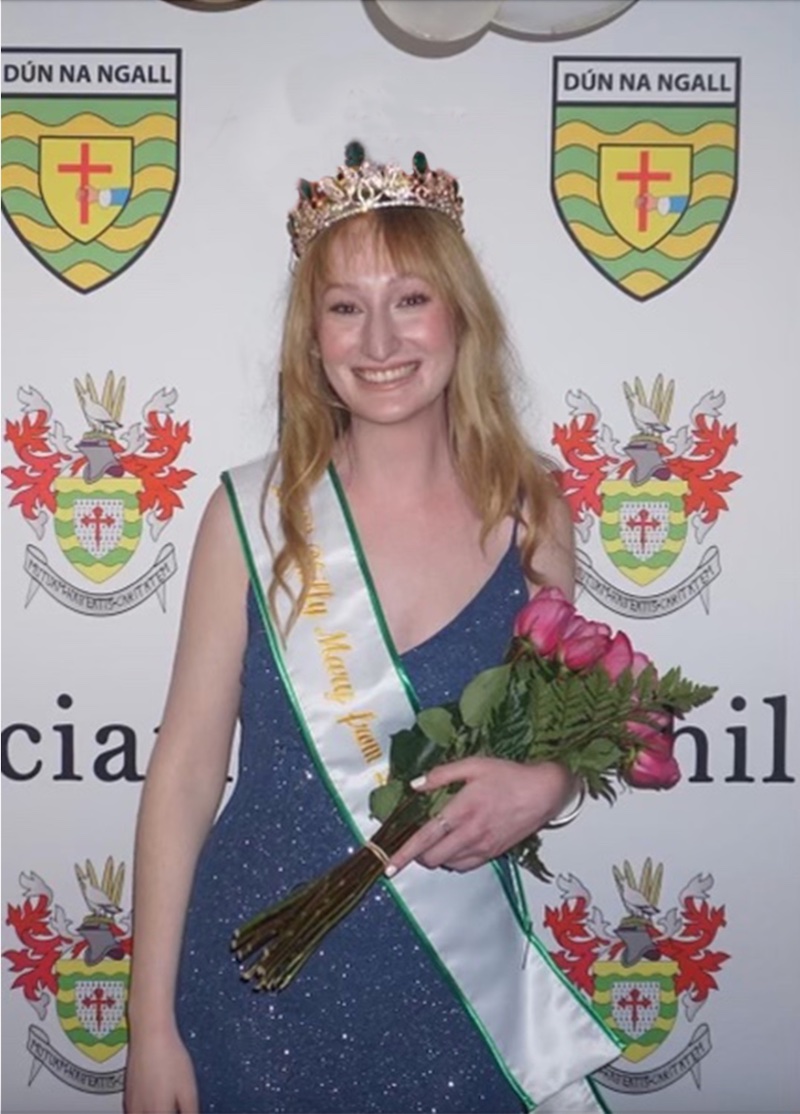 Pictured is AnneMarie Mantei upon her crowning as a “Mary from Dungloe” at the annual Donegal Ball, hosted by The Donegal Association of Philadelphia. Provided photo.

According to Mantei, there were seven contestants for the December pageant. Her attire was a floor length Navy Blue gown that sparkled with sequins.

The pageant involved a private interview with various judges, with each contestant talking about their career goals, and why they would be the “best candidate” to represent the U.S. at this prestigious festival. The interview, Mantei added, was about an hour long.

“For me,” Mantei explained, “this will give me a chance to better connect with my Irish heritage and represent and honor all those that had to emigrate, while not knowing what was to come.”

The personal experience afforded Mantei, if crowned the International Mary, will enhance her studies and help her better understand the issues facing immigrants today.

In Philadelphia, The Donegal Association, which is a beneficial social, charitable and cultural organization founded in 1888, works to incorporate cultural values into their charter. The annual Donegal Ball, held in December, remains the highlight of their social activities to include the “Mary from Dungloe” pageant. They also award four “Donegal Ball” scholarships and support Irish causes and various charities in the Delaware Valley.

As for the pageant, Mantei stated that competitors offered a variety of dancing, music, and more. “It was all-inclusive,” said Mantei of the diverse talent. 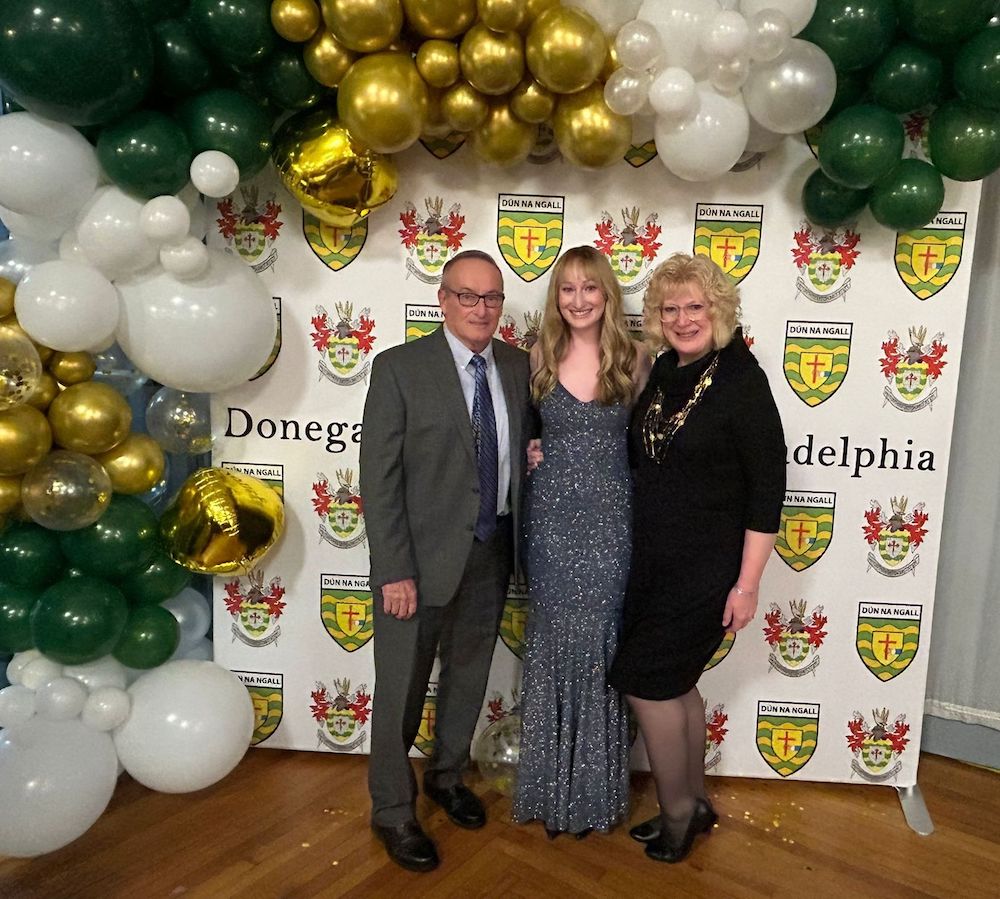 AnneMarie Mantei is pictured with her parents, Joyce and Leonard Mantei, at the Donegal Ball in Philadelphia, hosted by The Donegal Association of Philadelphia. Provided photo.

For her talent piece, Mantei read the song “Gleanntáin Ghlas’ Ghaoth Dobhair” by Proinsias Ó Maonaigh, in Irish. In English, the title is “The Green Glens of Gweedore”.

Mantei said, of the song lyrics, “It is one of the well known Irish language songs of Ireland and it tells a story that many can relate to when faced with leaving Ireland to come to the U.S.” (See the song lyrics below.)

And now that Mantei is a “Mary from Dungloe” her career, as well as her heritage and roots, will merge her education with experience to compliment her career goals.

For 2023, and as a “Philadelphia Mary”, Mantei will represent the title at various Irish events and parades, while proudly wearing a veil of her own heritage.

“My grandfather’s entire family is Irish,” said Mantei, and added, “By being a Philadelphia Mary I graciously represent the immigrants and what they had to give up to come here.”

Mantei will also visit elementary schools, and other venues as well as participating in parades as St. Patrick’s Day nears in March.

“It’s a great representation of immigration, and the struggles of the people,” Mantei added.

She plans to further her education in the fall, studying immigration law; her representation as the “Philadelphia Mary” is something that will offer Mantei a closer look at the hardships and struggles of today’s immigrants.

Things will culminate this summer when Mantei travels to Ireland to compete to be a “Mary from Dungloe” internationally, a title she is hoping to earn.

You can follow Mantei on Instagram @philadelphiamary where she is sharing her journey this year, and in Ireland at the International festival. In the meantime, the following are the lyrics to “Gleanntáin Ghlas’ Ghaoth Dobhair”, a song that represents a more painstaking journey – the journey of an immigrant.

Farewell, farewell to Donegal
That county sweet and fair
And to her brave men when the enemy came
Never cowered or bowed to the Gall
I hold in esteem all those women and men
And all children big and small
That dwell therein peace without worry or grief
In Gleanntáin Ghlas’ Ghaoth Dobhair

Be the first to comment on "Farewell to Donegal; Tioga County Native merges education and experience with ‘Mary from Dungloe’ aspirations"