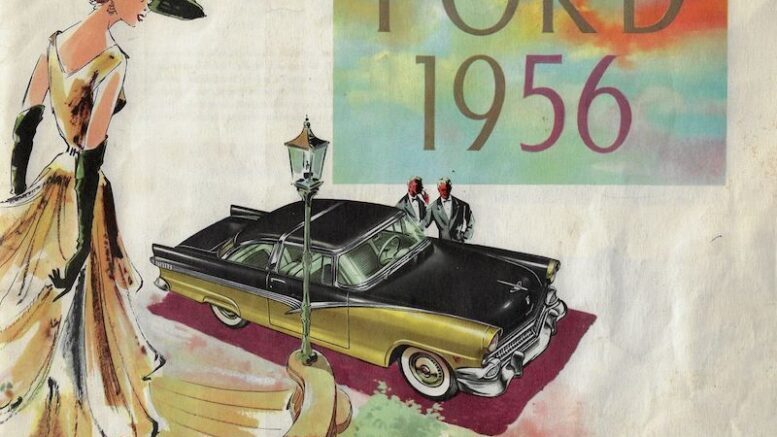 Reader John Hannon remembers the 1956 Ford Crown Victoria as the “best of the decade” and gives several good reasons why. It was similar in mechanicals to sibling Mercury. (Ford Motor Company)

Reader favorite car from the 1950s

Q: Hello Greg and I enjoy your weekly car columns. Based on your recent article about cars from the 1950s, the Ford Crown Victoria, two-door, red and white, I feel is the think the best looking Ford ever built.

The 1956 models had a 12-volt battery electrical system (instead of 6-volt). It also featured a new dash and radio straight across the dash and not round in the center of the dash like the 1955.

The 1956 Ford also had different front parking and directional signal lights, again, not round like the 1955.

Also, the ‘56 Ford offered seat belts for the first time, a 292 “Thunderbird” V-8 and special V8 emblems on the front fenders. My father had one briefly; sold it for short money, I’m not sure he ever got paid.

Reader John Hannon remembers the 1956 Ford Crown Victoria as the “best of the decade” and gives several good reasons why. It was similar in mechanicals to sibling Mercury. (Ford Motor Company)

Also, Sears & Roebuck in addition to its Allstate car sold many Vespa motor scooters back in the early 1950s. A friend bought one at Sears on Broad Street at the Manchester Connecticut Parkade. It was displayed in the detached Sears Automotive Center showroom. Signed John Hannon, Manchester, Connecticut.

A: John thanks for your nostalgic memories and sharing your feelings on the ’56 Ford. I agree, too, even though I love its sibling ’56 Mercury just a hare more! The Mercury that year also featured the new 12-volt electrical system as Ford and Mercury were tied at the hip mechanically. My Uncle John worked at the Mercury plant near Metuchen, N.J. and we’d visit the area where all those new Mercury’s were parked.

Buying collector cars at an auction

Q: Hi Greg and Happy New Year to you! I really enjoyed your article regarding rust on C3 Corvettes on wickedlocal.com – it was amazingly thorough and detailed.

I’m a first time Corvette buyer based here in the United Kingdom. I have been looking at an upcoming Mecum auction in Kissimmee, Florida.

The photographs on Mecum’s site are a little unclear as to the condition of certain parts of the vehicle, a ’72 Corvette coupe small block; most specifically there seems to be a dip in the front grille area under the bumper. I’m not sure whether this is an issue with the vehicle or a distortion from the image. I’ve asked for further images and information from the site/seller to include any other finer details, namely, service history, mileage, salvage / accident history, but have not received anything as yet. Simon Halfon, United Kingdom.

A: Hello Simon and thanks for your letter and nice words from across the sea.

Auction collector cars are all consigned by owners and it’s a good practice to hire a collector car professional to check the car in person at an auction if you can’t be there yourself. United Kingdom reader seeks info as he contemplates bidding on a Corvette. (Mecum Auctions)

First, remember that most every single car (99% of them) you see at televised style auctions are not owned by Mecum or Barrett-Jackson themselves, as you probably know. Private owners consign all these auction cars. So, it’s up to the owner of the consigned Corvette, via an auction address, to answer any and all questions.

Being that the owners of the Corvette have not responded to your questions I’d be a little suspect. As for your specific question about the front end, that’s a tough one. If you can contact someone that will be at the auction to check the Corvette in person that would be my recommendation as I’m sure there is someone available to take a good look at the car, overall, for a fair price.

Good luck and let me know what happens. Buying a car online or at an auction can be a great experience or in some instances, bad one. However, the big TV auctioneers are usually very reliable.

Thanks again for your kind comments and Happy New Year to you also.

Are we really ready for electric cars?

Q: Greg I’m a regular reader of your columns in the Bloomsburg Press Enterprise daily newspaper in Pennsylvania. I fully agree with your stance on EVs (electric vehicles) from a column you wrote I think in October.

I searched for an email from the NHTSA on EVs and fires. Unfortunately, I must have deleted it. To explain briefly, I had received an email video caught on a security camera of EVs lined up at a charging station, location not given. First car in line begins to smoke underneath. Shortly flames appear. Nobody in view. Fire consumed all five of six charging vehicles. I sent the link to my cousin, a retired fire chief in Ohio. He sent me a link by the NHTSA about several EV fires. (NHTSA is National Highway Traffic Safety Administration and very reliable.)

Instead of an engine, this is what you’ll be powered by when you buy a car with a Lithium battery. (NHTSA)

First in the video was an EV outside a home in California that burst into flames, also igniting the home by the time the fire department arrived. They saved the home and put out the car fire. While loading the EV onto a rollback, it burst into flames again and was doused second time. It was taken to the scrap yard and put in an area away from anything flammable. Three days later, it caught fire again.

The video said in order to douse an EV fire you must “deluge” it with water. Minimum amount of water was 600 gallons. Most fire trucks carry 300 gallons; therefore, you need a tanker to follow the engine.

The video also addressed the need to know where the main switch is to disconnect the battery on all EVs. That sounds like the need for a catalogue of year, make, and model to be accessed by FD arriving at the scene. Very problematic for FDs. Basically, stand back and make believe you’re attacking the fire. Then, what are the chances of electrocution? There was caution about that for responders and good Samaritans.

In conversation with a friend who is very familiar with magnesium, he spoke about the difficulty in putting out a magnesium fire. He reminded me lithium is an “ism.”

I believe we need more information about the dangers wrapped up in EVs. What is the data on accidents and battery compartment’s being compromised? People drive into flooded areas with gas-powered vehicles. What happens when they do that with an EV? Future costs: I heard battery replacement costs could be as high as $20,000 with replacement somewhere around 60,000 miles. What is the consumer to be aware of when purchasing a used EV?

I will keep my gasoline powered Subaru, my last vehicle before departing earth. I’m sending your EV article to my brother-in-law in Harrisburg who can’t wait to get his EV Silverado.

There are over 1-million electric vehicles (EVs) on the road in the United States. President Biden’s executive order, calling for the federal government to try to ensure that half of all vehicles sold in the United states be electric by 2030, ensures that number will increase significantly in the coming years (www.usfa.fema.gov). Signed: Gahrad Harvey, Shickshinny, Pa.

A: Gahrad, thanks for being a loyal reader. I still feel that the current Hybrid design is best, which means the car has an internal combustion engine to fall back on in addition to the modern EV battery.

The current government mandates of all electric by 2030 (and now I believe 2035) puts a tremendous pressure on businesses that deal in car production. Add in all the ancillary devices to make EVs work and the millions of charging stations necessary to “fill up” the battery in everywhere USA, and you get an idea of the have some serious demands right in front of us.

Unfortunately, wishing for something like all electric “whatevers” utilizing the sun, solar panels or windmills is easy to say and/or make laws in favor of this sun / weather related power source. Trying to accomplish what the government wants is at times impossible. I believe that’s where we are right now. Further, how many people can afford at least $50,000 right now for a new all electric vehicle?

Currently we’re experiencing numerous unpopular “green wishful thinking” happenings, as you note. One not mentioned is in the Dakota states, where certain charging machines were not working when the outside temps went well below zero.

Personally I am not against EVs all in due time. For me, however, I’ll take a Toyota Hybrid with that small 4-cylinder engine backup that allows fully safe driving, regardless of outside temperature or distance of trip. That’s why I’d like to see more research and development spent, not less, on Hybrid. I’d love to see a 300-mile battery range car with a small 3- or 4-cylinder engine as an assist or backup, all in one midsize car.

Currently there are just too many negatives from infrastructure to actual battery performance to believe we’ll all be EV by 2030 or 2035. These current deadlines made by silly politicians and their lobbyist cohorts (who never turned a wrench in their lives) are real.

And a very sad state of affairs.

(Greg Zyla is a syndicated automotive writer who welcomes comments on collector cars, auto nostalgia and any other car topics at greg@gregzyla.com or at 303 Roosevelt St., Sayre, Pa. 18840.)

Be the first to comment on "Collector Car Corner"