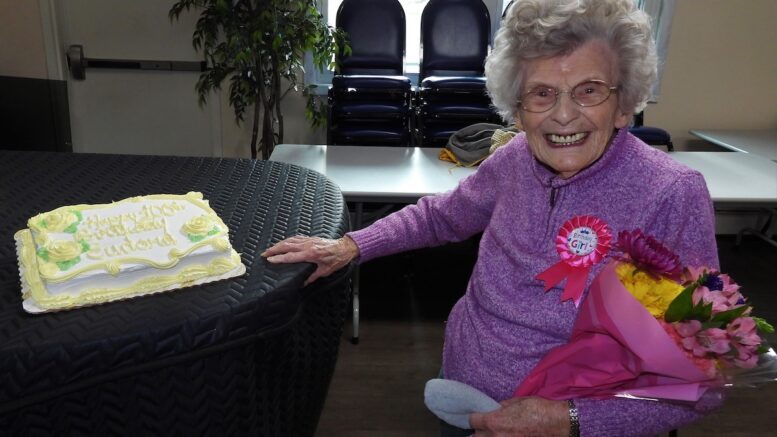 Eudora Shuler, of Owego, holds fresh flowers and poses next to a birthday cake on Jan. 11 at the Countryside Community Center. Eudora celebrated her 100th birthday on Jan. 12. (JoAnn R. Walter Photo)

Owego, N.Y. resident Eudora Shuler celebrated her 100th birthday on Jan. 12. One day earlier, on Jan. 11, and following her weekly chair yoga class at the Countryside Community Center, friends and fellow class participants gathered to wish Eudora a happy birthday. Cake and cookies were served, and gifts were extended.

Eudora chuckled about one gift, and that being a pair of “Hot Sox”. The novelty sock item can be heated up before wearing. Perhaps she’ll do just that after her regular daily walks.

One secret to her longevity, Eudora said, is a consistent walking routine. She explained that she has walked nearly every day for most of her life, and today still walks a good half-mile.

Eudora mentioned that walking became routine in childhood, and where she remembers walking the hills in Ithaca during the Depression. 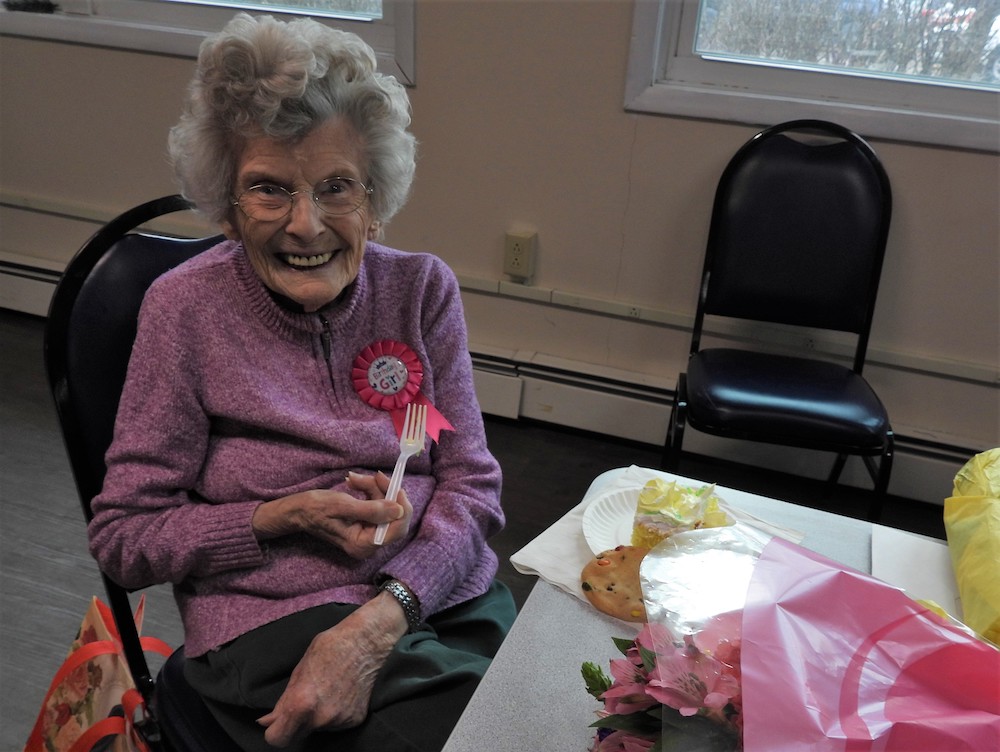 Eudora Shuler, of Owego, age 100, enjoys a piece of cake for her birthday at the Countryside Community Center on Jan. 11, and after a Chair Yoga class she attends weekly. (JoAnn R. Walter Photo)

Another secret to longevity, Eudora shared that eating well started in her early years, too, and where her family maintained a garden of fresh food.

Born in 1923, Eudora grew up in Ithaca and graduated from Ithaca High School. Next she completed nursing school and then moved to Owego after marrying her husband, Fred, who passed away in 2006. The couple raised two sons, Bill and James. James and his wife, Margaret, raised two children, Eudora’s granddaughters.

Eudora is proud of her longtime profession as a nurse, and where she worked in several facets like public health, a doctor’s office, private duty and as a school nurse, to name a few. Eudora stepped up to be a staff member in a hospital ward while she was still in nursing school during World War II, and a pivotal role since many doctors and nurses had been sent overseas.

In recent years Eudora has been a regular weekly participant at Chair Yoga, a popular class held at the Countryside Community Center, located at 9 Sheldon Guile Blvd. in Owego. 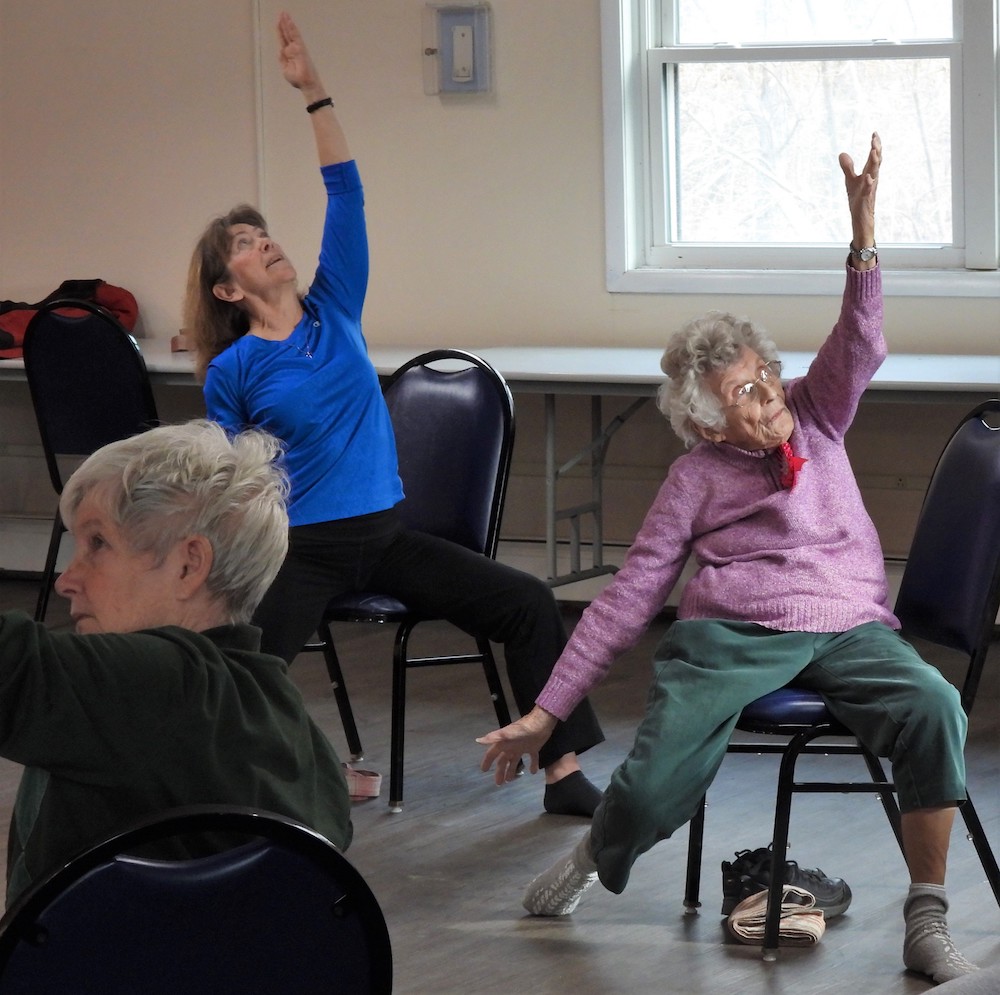 On the right, Eudora Shuler, of Owego, participates in a Chair Yoga class on Jan. 11 at the Countryside Community Center. Eudora turned 100 on Jan. 12. (JoAnn R. Walter Photo)

“It’s important to stay limber,” Eudora said, and added that the sessions help her overall health.

Chair yoga is a gentle form of yoga practiced while sitting in a chair, or standing using a chair for support. At Countryside, certified instructor Nina Smith leads participants as they sit in a chair, and coaches them to perform various poses. Chair yoga is acclaimed for its role in improving concentration, posture and balance, flexibility and strength, as well as helping reduce stress and joint strain.

When asked how long she has been attending Chair Yoga, Eudora smiled and replied, “Well, ever since it started.”

Smith shared that classes started in about 2018, and have been ongoing with the exception of the pandemic time period. Sessions are free and participants do not need to register in advance.

A Chair Yoga class, held weekly at the Countryside Community Center in Owego, is a popular draw for many, including 100-year-old Eudora Shuler. (JoAnn R. Walter Photo)

Eudora’s love for walking has inspired her and others to participate in notable community activities, such as the Tioga County CROP Hunger Walk. Last October, Eudora completed one mile of the approximate three-mile walk alongside her daughter-in-law.

Eudora also gives back to the community in other ways, and anytime she can. For example, she has participated in past years as a bell ringer for the Salvation Army’s annual holiday campaign.

At the end of the day, Eudora remarked, “I hope I have inspired others.”

Individuals who are interested in Chair Yoga can call Tioga Opportunities for details at (607) 687-4120, ext. 331 or visit https://tiogaopp.org/exercise-for-older-adults.

Be the first to comment on "Staying strong at 100!"