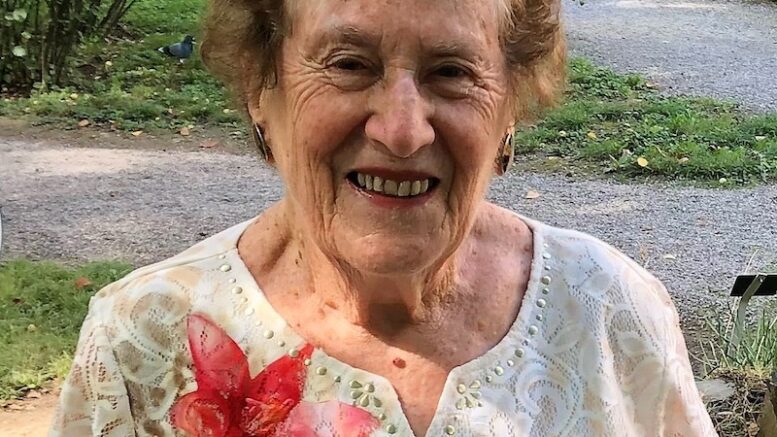 Long-time Owego resident, Marilyn Ochs, passed away on July 18 at the age of 92. She is remembered as being an extraordinary teacher and storyteller, and was active in many community organizations. Predeceased by her husband, Reid, she is survived by three children, grandchildren, great-grandchildren, and nieces and nephews. Provided photo.

Long-time Owego resident, Marilyn Ochs, passed away on July 18. She was 92. Funeral services were held on July 26 at the Owego United Methodist Church, and officiated by Reverend Nancy Adams.

Born in Corning, N.Y., Marilyn graduated from U.E. High School in 1947 and Albany State Teacher’s College in 1951, and soon after taught several languages at Cohocton High School in Cohocton, N.Y.

It was in Cohocton that she met her husband, Reid Ochs, and then went on to earn her Master’s Degree from SUNY-Geneseo. Marilyn and Reid’s family grew to three children, Mark, Scott and Deidre (DeeDee).

A teacher in Corning and Elmira early on as well, Marilyn eventually settled in Owego where she was an award-winning teacher during a 40-year career, and that later inspired two of her children to enter the profession. Marilyn was also an active member of the Owego Business and Professional Women’s Club and a volunteer at ACT, among other volunteer work.

In 1969, Marilyn suffered the heartbreaking loss of her husband, but went on to devote her life to raising her children.

Son Scott noted that at the time their ages were 11, 10 and 6, and although a challenging time period, remarked, “She was the most amazing, devoted mother,” and further commented that Marilyn also attended nearly every sports event that her children were a part of.

Rev. Adams cited that Marilyn, although widowed in her early thirties with three young children, was able to, “Persevere, and was strengthened by her faith.”

Rev. Adams remarked, “Marilyn lived her faith, and was called to teach in both public school and Sunday school. She was a gifted teacher and storyteller. She had a passion for imparting knowledge and preparing her students for life,” and added, “She also went to Zimbabwe on a mission trip, and to do what, to teach!”

Another fond memory shared by Rev. Adams occurred during a youth retreat that both she and Marilyn attended, along with young people from grades 10 through 12. Adams chuckled as she recalled a moment when Marilyn referenced the musical artist, Axl Rose, from the popular band Guns N’ Roses.

Rev. Adams said that Marilyn managed to grasp the young people’s attention by the mention of the rock star, and, “Somehow brought the story around to talk about Jesus.”

Remarkably, Scott said that Marilyn taught Sunday school from the age of 14, and up until COVID first hit two years ago.

The Rev. Dr. Daniel Ling, a guest speaker at service, noted, “When I was appointed as Superintendent of the Binghamton District, I noticed that there were many men, and thought it was time to have women in leadership. So I called on Marilyn.”

As a Lay Leader in her home church and for the wider conference, Marilyn worked alongside Dr. Ling for several years.

Dr. Ling continued, “Marilyn had a real sense of service, and she lived a life in service to God, and service to all of the children that she taught.”

Among many fond memories, Scott shared, “She taught us how to have fun as a family, and with simple things in life,” such as silly stories around the campfire, and then, “A deck of cards, and especially Pinochle. She was brutal in that game.”

A story about the Ochs family spirit when school was closed due to snow days brought chuckles from guests gathered at the service. Scott explained that snow days were not just a free day off, but also a day for Marilyn to spend with her children.

Many in the community shared an outpouring of love in Marilyn’s honor via the funeral home’s tribute wall and social media platforms.

Comments ranged from, “She was a rare gem,” and, “I admired her as my first grade teacher; my love for reading and adventure started there,” and, “She was my favorite teacher; she was so kind, understanding, and had a wonderful soul.”

Additional comments included, “I salute a teacher who makes us all proud of the profession,” and, “Mrs. Ochs was my Kindergarten teacher; she inspired me to become a teacher,” along with, “She was a great role model for working mom’s everywhere.”

In Marilyn’s final weeks, Scott commented that his mother remained engaged in wanting to hear all about her grandchildren, nieces and nephews.

“She touched lives with her love,” Scott said, adding, “And she often put other people’s needs and problems first over her own.

Scott concluded, “Our mother’s love made a lifelong imprint, and she taught us real values and what is important in life.”

Marilyn is survived by her children and their spouses, Mark and Mary Ochs, Scott and Janet Ochs, DeeDee and Bill Jones, along with her brother David Allen and his wife, Janet, several grandchildren and great-grandchildren, and many nieces and nephews.

You can read the full obituary at emfaheyfuneralhome.com.

Be the first to comment on "Remembering an extraordinary teacher"