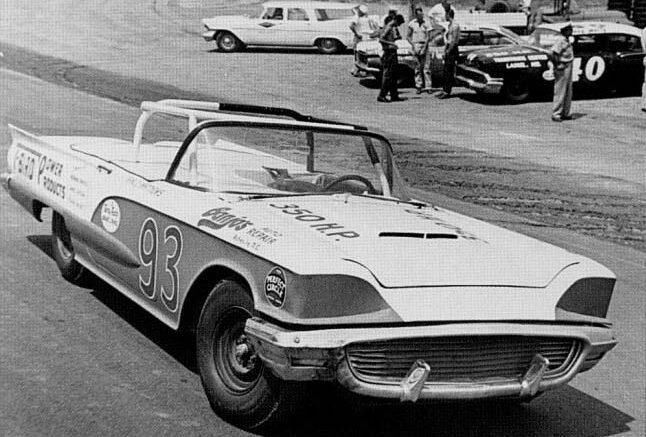 Q: Greg, I enjoy NASCAR racing and have followed the sport since the very first Daytona 500 in 1959. My question is about those famous NASCAR Thunderbirds back then, both hardtops and convertibles? Weren’t they available from Ford Motor Company ready to race? Also, how long did NASCAR run their convertible division? Sam L., Providence, Rhode Island.

A: Sam, let’s start with the NASCAR convertible division, which was run sometimes with the superspeedway Grand National races (notable the Daytona 500), while other races were convertibles only. 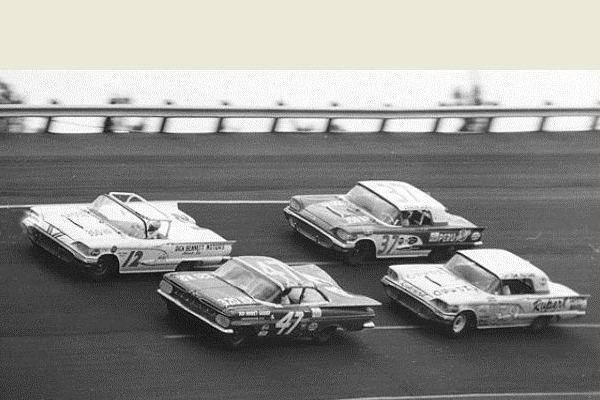 Action on the high banks of Daytona back in 1959 features three Holman Moody ’59 Thunderbirds, including one zipper-top convertible No. 12 driven by Ralph Moody himself. Also shown are the 37 driven by Eduardo Dibos from Peru, a 1959 Chevrolet driven by Emanuel Zervakis (47), and Thunderbird 59 driven by Tom Pistone. (Compliments Holman Moody collection/NASCAR)

The convertible division ran from 1956 through 1959, as convertibles were a top attraction. There were four convertible champs crowned including Bob Welborn, who was the champ three years in a row from 1956, 1957, and 1958. In 1959, Joe Lee Johnson won the convertible crown in its last season.

NASCAR dropped the convertibles for 1960. Memorable notes include Curtis Turner, who dominated the action in 1956, winning 22 of the 42 races he competed in behind the wheel of a ’56 Ford ragtop owned by Pete DePaolo. He didn’t compete in as many races as Welborn on the 47-race schedule, losing the championship by over 800 points. Still, Turner dominated the action and his winning percentage won’t soon be duplicated, regardless of NASCAR division one is competing in.

In 1957, Welborn won six of 36 races, but Turner was again top winner with 11 wins in 29 races entered, again in a DePaolo owned Holman Moody Ford. In 1959, Johnson won the title driving a Chevrolet with two wins in just 15 races. 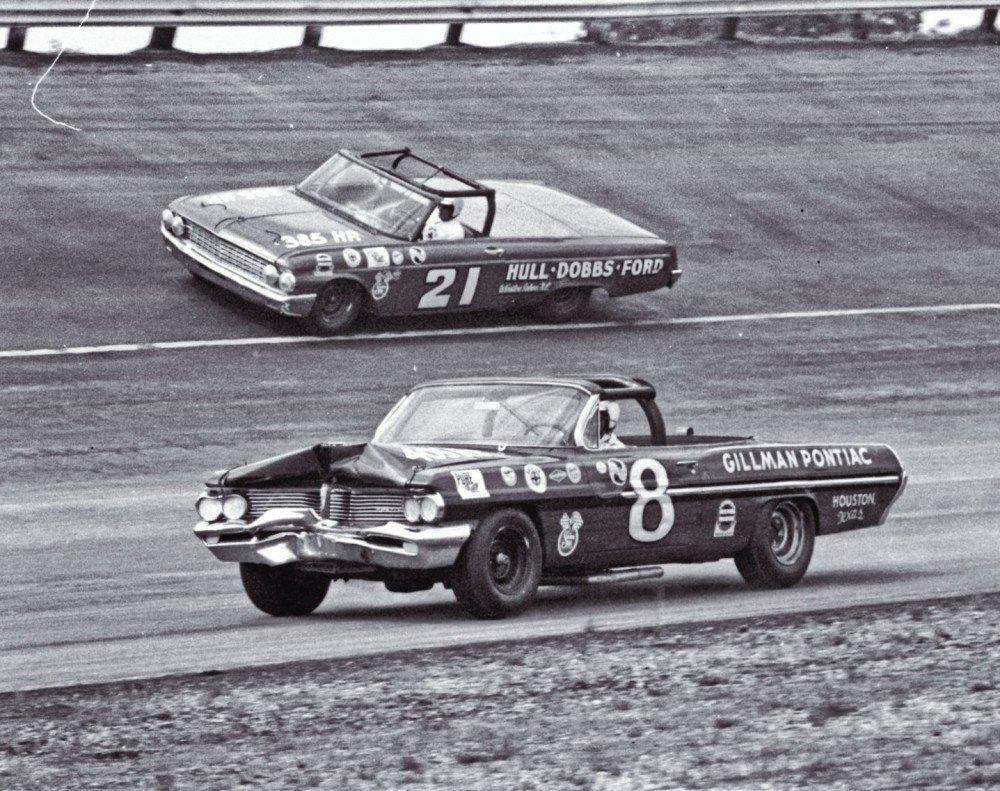 The final race for the NASCAR convertibles took place in 1962 at Darlington. Shown is second place finisher Marvin Panch in a Ford (21) as he goes by Joe Weatherly in his damaged Pontiac (8) car. Both were zipper-top stock cars as the tops could easily be reattached. Nelson Stacy in a Ford won this last ever, convertible race. (NASCAR)

However, and this is a big however and the reason many zipper-top racecars were built. The current Rebel 400 NASCAR Cup race at Darlington was held as a Convertible Division race from 1957-1962. So, back then the Rebel 300 was held as a Memorial Day convertible race even after the division ended in 1959, with full Grand National points awarded from 1960–62. Winners were Joe Weatherly, Fred Lorenzen, and Nelson Stacy, respectively.

Having already subscribed to National Speed Sport News during the convertible series heyday, I always awaited the results of the convertible division and the many photos that appeared where you could see the drivers in their cars always got my attention. 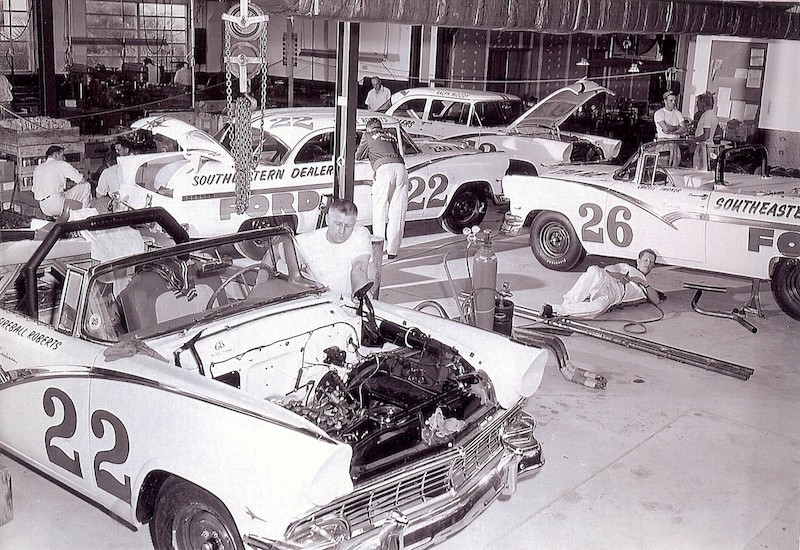 This is the crowded garage area of Pete DePaolo Engineering back in 1956 getting several Fords ready for battle on the NASCAR Grand National circuit. DePaolo had sponsorship from Ford dealers and was forerunner of Holman Moody. (Compliments DePaolo / Holman Moody)

The 1959 race ready Thunderbirds you speak of were indeed available, but not directly from the Ford company dealers. The legendary team of Holman Moody was the pioneer company building the initial race-ready Fords for the Ford Motor Company. You mention you remember that first Daytona 500 in 1959, where Johnny Beauchamp, in one of the Holman Moody Thunderbirds, nearly won the race against Richard Petty in his Oldsmobile.

That finish in 1959 at Daytona was initially called for Beauchamp, only to be overruled, thanks to a photo. Fans today recall it took NASCAR three days for Petty to be declared the winner after Beauchamp experienced all the victory lane laurels.

I contacted Lee Holman a while back, son of the great founder, for this information on the ’59 Thunderbirds. Thus, this story starts in late 1957, when John Holman and Ralph Moody officially formed the soon to be famous Ford race car building company, Holman Moody, at the Charlotte Airport business complex. With Ford’s blessing, but not yet full factory support, it saw Holman Moody full size Fords win its first races in 1957. Moody moved to North Carolina to work for Pete DePaolo’s Ford racing effort, featuring drivers Fireball Roberts, Curtis Turner, Marvin Panch and Moody, too. Southeastern Ford dealers sponsored DePaolo.

By late 1957 those beautiful Thunderbirds were on the building jig in prototype form as a 4-seater 1958 T-Bird model, but still a year away from the track. However, the full size Holman Moody 1958 Fords were entered in the last convertible race on the Daytona Beach Course, where good friends Curtis Turner and Joe Weatherly raced to a win and a third, respectively. Weatherly would have finished one-two with Turner had Lee Petty not tangled with him on the last lap, as Petty finished second when Weatherly spun and gathered it back up for third. (This video is on YouTube.)

Also, 1958 is the year Ford gave its official stamp of approval and full factory support to the team, and that’s where I remember seeing ads for those Holman Moody race ready 1959 Thunderbirds. This corporate backing found Holman Moody building what Lee Holman remembers as a “dozen or so” 1959 Thunderbirds, all having the capacity of removing the top to compete in the convertible races and called “zipper tops.”

With five of seven Thunderbirds in the 1959 Daytona 500 built by Holman Moody, that inaugural 500 is still talked about to this day as Beauchamp and Petty averaged 135.521 mph for the entire 500 miles with no yellow flags. Banjo Matthews, another NASCAR legend builder and driver, drove a Holman Moody “zipper top” Thunderbird in 1959.

In summary, of all the cars produced, Thunderbirds were indeed special, and I believe all those older T-Birds form the 1950s are great vehicles to own, be it a nostalgia racecar or a collector car. And, although the 1955-1957 Thunderbirds bring the most bucks, there’s nothing like those 1959 NASCAR Thunderbirds for a great look back at Ford’s history.

As for Holman Moody, the company has been involved in all disciplines of racing, from Lemans to Daytona. Although no longer active in racing, they are building brand new GT40 Ford sports cars. Visit their website at www.holmanmoody.com for information or nostalgia items.

Thanks for your letter Sam.

(Greg Zyla is a syndicated auto columnist who welcomes reader questions and info on collector cars, auto nostalgia and motorsports at greg@gregzyla.com.)