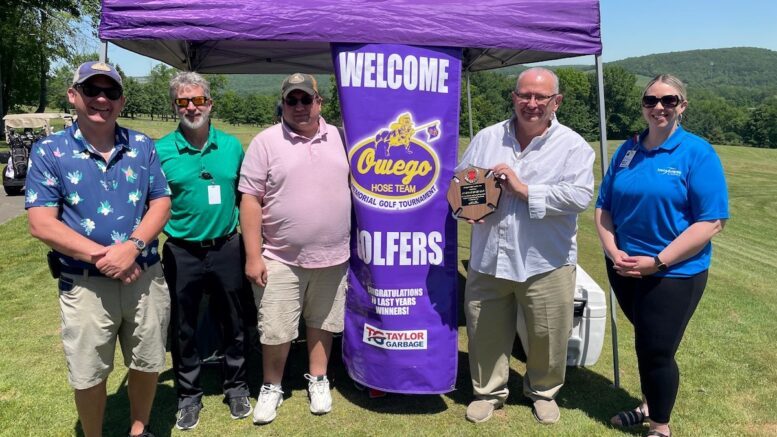 Owego Hose Teams, Inc. hosted its 5th Annual Memorial Golf Tournament last Saturday at the Tioga Golf Club in Nichols, N.Y. The tournament is one of the largest charity golf tournaments in the Southern Tier with 67 teams that played this year comprising 268 golfers. Nearly 100 sponsors supported the event. Tournament organizers celebrated their fifth straight year with more than 64 teams.

“We pride ourselves in running a first-class golf tournament,” said Tournament co-chair Lou Striley. “The numbers don’t lie. Every year we are at capacity and have a waiting list because people want to play the Hose Team tournament.”

Funding raised from the tournament supports scholarships for graduating Owego Free Academy seniors pursuing a first responder field; maintenance costs for the recently restored Baker Fireman’s Fountain in the Village of Owego’s Courthouse Square; and funding for the restoration for the Owego Fire Department’s 1866 Amoskeag Steam Fire Engine and associated “Steamer House” that is being built on North Avenue. The tournament paid for 40% of Baker Fireman’s Fountain Restoration costs and funded $5,500 in scholarships to date.

Winning the tournament this year was the Fred Ulrich team that included David Ulrich, Jorden Updyke, and Les Hoyt, who shot a 56 or 15 under par. Adding to the excitement of the day, Steve Kovall of Endicott hit a hole in one on hole nine (9) worth $11,000.

Kovall stated, “All of this wouldn’t have been possible without the Hose Teams’ hard work, and it is very appreciated.”

The tournament also memorializes deceased Hose Team Members including Fallen Owego Firefighters Steve Gavin and Matt Porcari, who both died in the line of duty.

Incorporated as a not for profit in 2015, Owego Hose Teams, Inc. have been competing in modern firematics since 1951. The year 2021 marked their 70th anniversary season. Hose races are timed events where firefighters test their skills. Teams of five members must connect nozzles to hoses, hoses to hoses, and hoses to the fire hydrant, and knock down targets in the quickest time in the ladder, wye, and straight lay competitions. Hose races improve basic firefighting skills.

Pictured is Hole in One winner Steve Covall. Provided photo.

You can witness this action this year at Owego’s Strawberry Festival, and on North Avenue near the fire station and Lounsbury Agency.