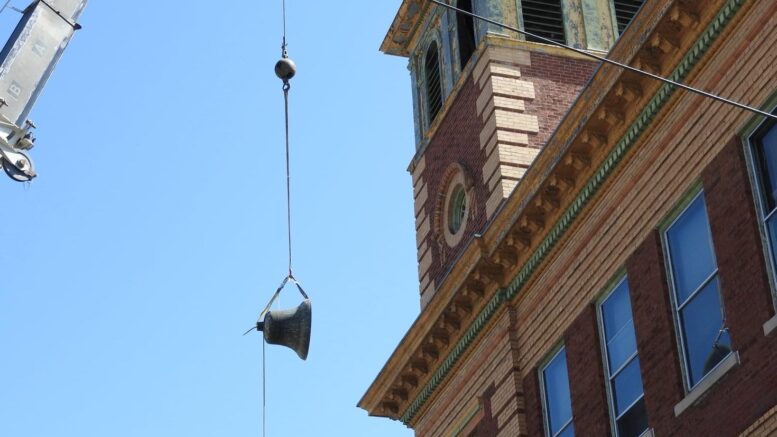 The Tioga State Bank Foundation has partnered with the Owego Hose Team and purchased 20 pounds of bell stock to preserve the historic Owego Central Fire Station Bell that was removed last spring. The bell is currently under restoration at the Verdin Bell Company facility in Ohio where it is undergoing sandblasting with a fine polish, then will be installed in the Hose Team’s Steamer House building planned next to Owego Fire Station #2 on North Avenue.

“We appreciate TSB Foundation’s commitment to this piece of the Steamer project,” said Hose Team Executive Board Member and Past Owego Fire Chief Dan Gavin, adding, “If all goes accordingly construction of the Steamer House Building could start this summer including the installation of fire bell.”  Manufactured by MeNeely Bell Company of Troy, N.Y., the bell was presented to the Village of Owego by Dr. Sidney Wells Thompson on Dec. 11, 1911, the year Owego Central Fire Station was built.

Construction of a “Steamer House” will showcase the Owego Fire Department’s 1866 Amoskeag Steam Fire Engine and 1939 Sanford Hose Truck. Modeled after a Steamer House located in Marathon, N.Y., it will be constructed of cedar wood frame and glass solarium walls for 360 degree viewing with a steeple for the fire bell. The bell will eventually chime on the hour and for special occasions as it did in the past.

The Hose Team is raising all funds for the Steamer project privately. To help offset additional costs for the bell, the Hose Team is selling “Doc ‘T’ Preferred” bell stock as a nod to Dr. Thompson who donated the bell in 1911. For $25 an individual can buy one pound of the historic bell with only 813 pounds, the bell’s weight, to be sold. To date 545 shares have been sold with only 268 remaining.

A similar campaign was held in the early 1900s that raised funds for the “Old Joe” bell located in the Courthouse Square. “Doc ‘T’ Preferred” stock can be purchased on the Hose Team website at www.OwegoHoseTeams.com. All contributions are tax deductible as the Hose Team is a recognized 501c3 Not for Profit organization.