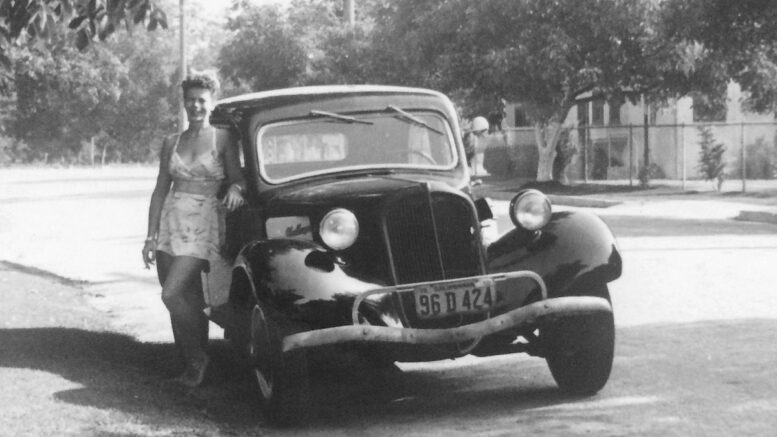 Reader Seltzer sent along this photo of his mom back in 1950 standing next to the family’s 1939 Citroen Traction Avant in Tarzana, Calif. (Seltzer collection)

Q: Greg thanks for all your great stories. I love reading them as they bring back a lot of memories. I’m now 78 years old and got my driver’s license in 1959, so I remember well all of the late 1940’s and 1950s cars you write about. I really liked your “First Compact Cars” feature.

When I was 13 years old in 1956 my “favorite” car was the Nash Metropolitan. My sisters still kid me about that because looking back the styling was a bit odd, to say the least. While it is certainly “compact,” it was built in England so it didn’t qualify as one of your first “American Compact Cars” column.

I’ve owned 110 vehicles since 1959 and there is always a story that goes with each one. My first car after I turned 16 in 1959 was a ’49 Cadillac Convertible, certainly not a compact, but my Dad suggested getting a Cadillac because he said the owners generally took very good care of them. I paid $300 for it, and it was black with red and white leather interior. It also featured the first overhead valve (OHV) V8 in a Cadillac. 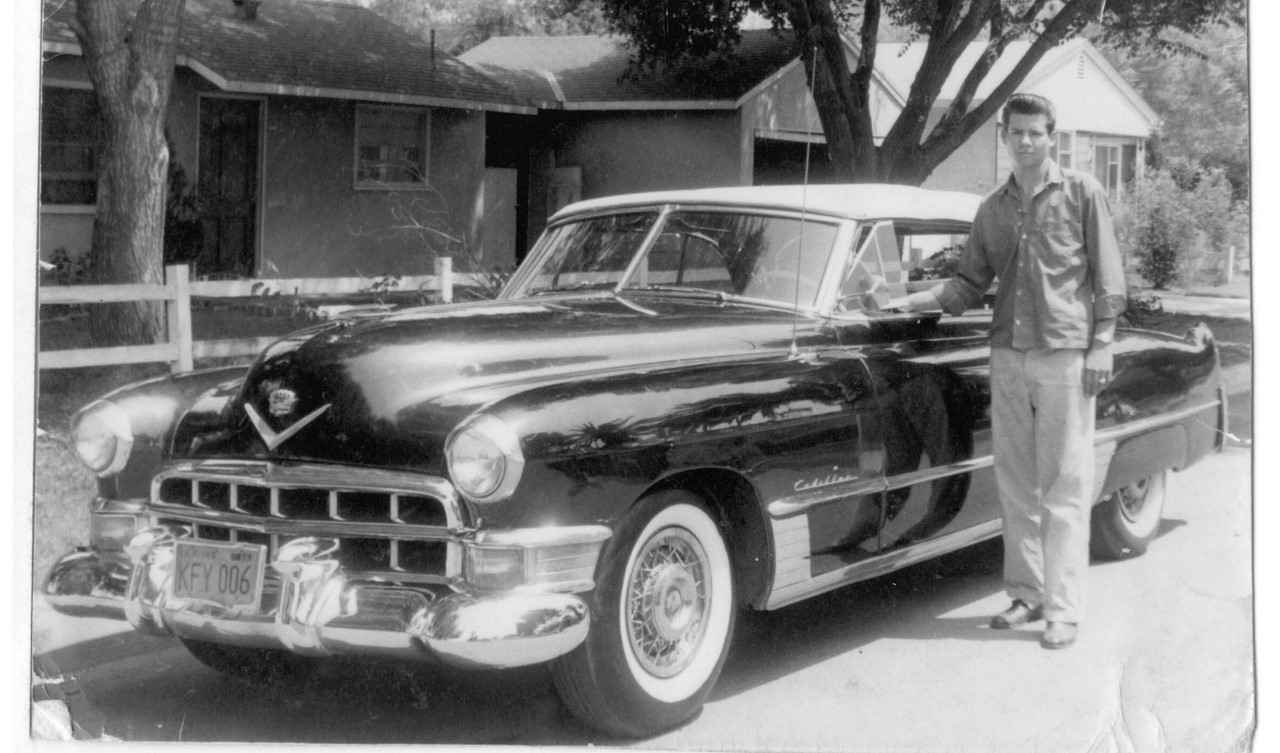 Here’s Eric Seltzer with his very first car, a 1949 Cadillac convertible he bought for $300 in Sherman Oaks, Calif. (Seltzer collection)

I’ve kept a list of all my cars with photos, and lately I have been writing down my stories about each one. My dad was into cars and always drove something unusual and I got my interest in cars from him. For example, around 1950 he drove home one day in his latest purchase, a 1939 Citroen Traction Avant that certainly stood out from all the Fords and Chevys in the neighborhood.

Another favorite car of mine was the Willys Aero from 1952-55, noting that the two-door hardtop was very attractive. With a wheelbase of 108″ and an overall length of 183″ they were certainly much smaller than a 1952 Chevrolet 2-door with a wheelbase of 115″ and length of 198.”  The Willys was available with 4- or 6-cylinder inline engines and I am wondering if this qualifies the Aero as a “compact” car for your story? It’s bigger than the Henry J, but smaller than a Chevrolet. 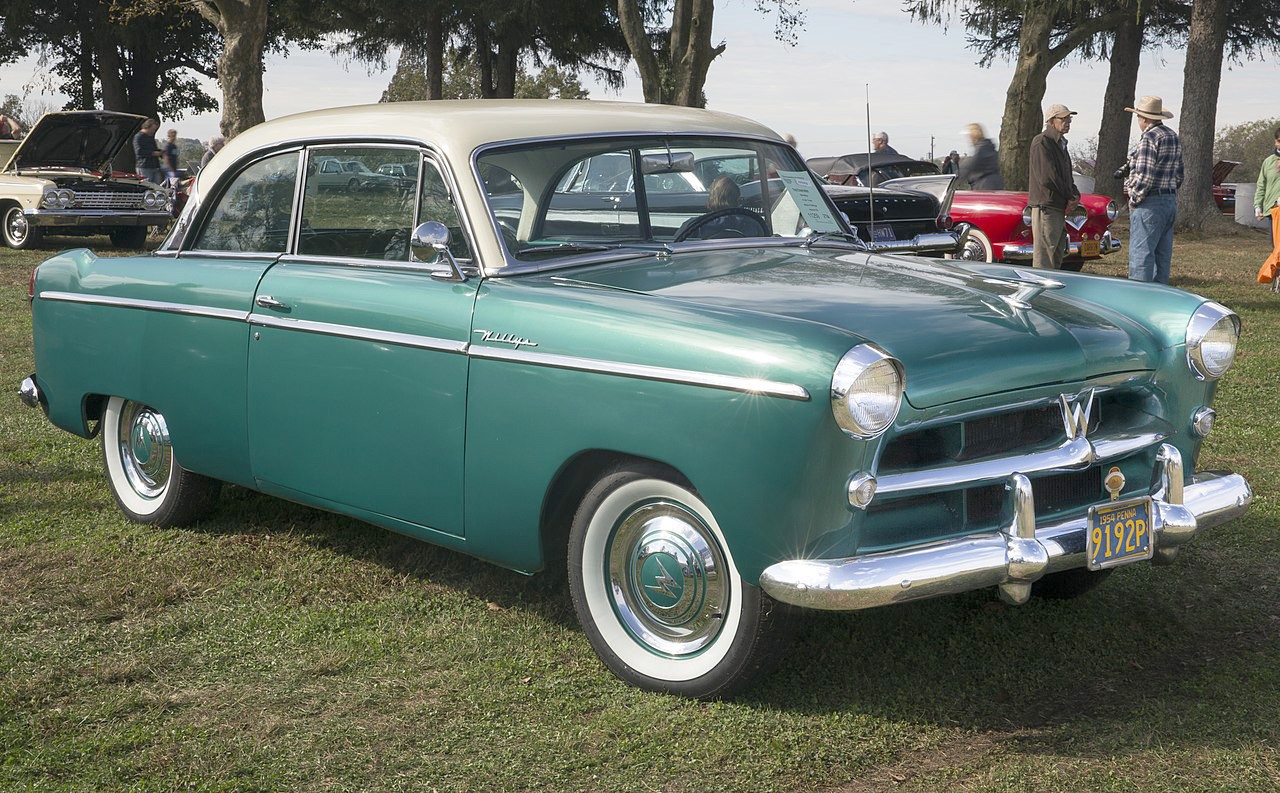 A favorite car of Seltzer is the 1952 to 1955 Willys Aero, perhaps one of the first American intermediates to be sold in the post WWII era market. (Willys-Overland)

A: Eric thanks so much for your detailed letter and photos. The 1952-1955 Willys Aero, although not a true compact car in comparison to the others, may well have been one of the first successful American-built intermediates and worthy of praise. Most of the manufacturers went from full-size to compacts in one big downsize step starting in 1960. The intermediates evolved full-bore by 1965 as prior successful “smaller” full-size cars included the Studebaker Lark, which debuted in 1959 with its smaller proportion body although the chassis was the same as its 1958 model.

Thanks again for your letter and photos. They’re great.

Q: Greg, Henry Ford may have helped build America thanks to his assembly line but he was stuck on that Model T too long. Thanks to his son, Edsel Ford, who came up with the Model A in 1928, bought the Lincoln brand in 1922 and established the Mercury line in 1939, I think Ford would have gone down and eventually out of business without him.

Old Henry should have been forced to retire in the 1930s and also forced to hand over the entire running of Ford to Edsel. Then, also remove the other corporate directors from the Ford establishment for good.

Edsel had the forward vision that ‘ole Henry lacked. I feel if Henry had retired maybe Edsel would have lived longer. He passed away May 26, 1943 from stomach cancer at age 49.  Henry was known for interfering with Edsel’s car plans and causing big problems for Edsel. When Henry died April 7, 1947, I don’t think his wife Clara cried too much at the funeral. Clara died in 1950 and they are all buried at Woodlawn Cemetery in Detroit. I’ll send you some photos of my 1957 Ford Fairlane when I get it running. Thank you for your columns of the older cars. Glenn J. Molina from Kahului, Hawaii.

A: Unfortunately, much of what you say is true Glenn, although much of the research I have is that Henry and his wife were very close all their lives. As a youngster Edsel and his dad got along great. That close relationship became stressed in Edsel’s adulthood, which is covered in numerous books on Henry and the Ford Motor Company.

You are correct about Henry’s control in all aspects of Ford operations. He tightly contained the process and was something Edsel could never fully overcome. Although from 1919 to his passing, Edsel was President of Ford Motor Company, he knew his title was just that, a title. Henry still had to give the “official okay” to most of his son’s outstanding achievements while shooting down some of his other innovative ideas. 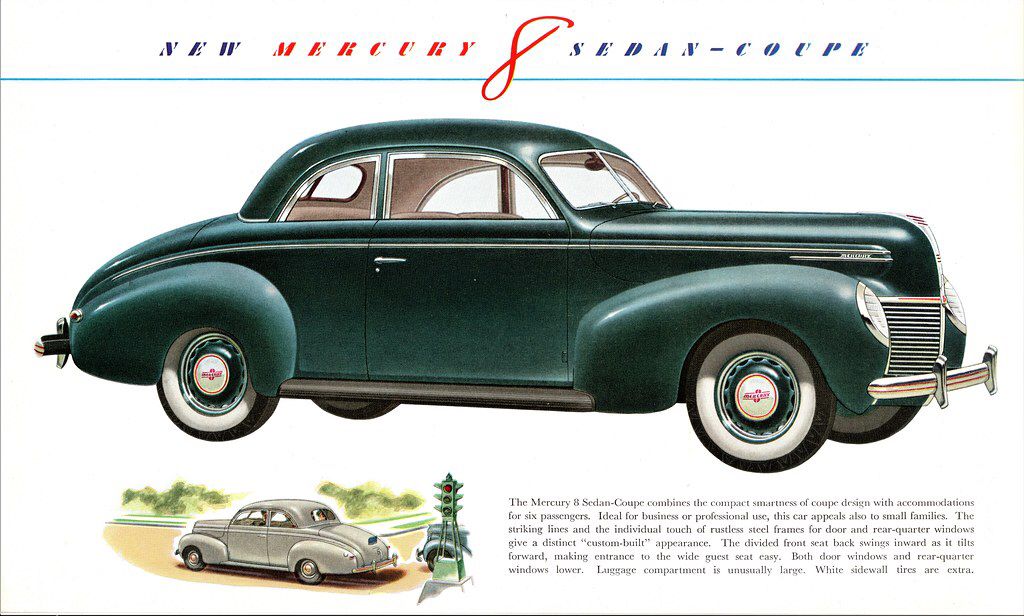 Edsel Ford is responsible for bringing Mercury to market back in 1939. Shown is the two-door coupe model, a very popular vehicle that year. When re-styled in 1949, it was one of Ford’s top selling models. (Ford)

There is a feature in many newspapers and in Auto Round-Up magazine I wrote called “Edsel Ford – Remembering the Man, Not the Machine” – the latter alluding to the infamous Edsel car, sold from 1958 through 1960 and remembered as one of Ford’s biggest flops. You might enjoy searching for it, and thanks for your interesting letter defending Edsel Ford and his many achievements. Also, don’t hesitate sending me those photos of your ’57 Ford Fairlane.

Roots of the Plymouth name and a Plymouth tractor

Q: Greg, I read your articles wherever I can find them and they are always a delight for a Motor Head like me. When announcing at various automotive events I always try to sprinkle in a few trivia questions here and there, and one was, “Where did the name Plymouth come from?”

Most car brands were named after the founder or some person or thing of high recognition. Folks would always guess the name Plymouth was in reference to Plymouth Rock as the early Plymouth cars had a radiator cap with an image of the Mayflower.

So, where did the name Plymouth came from?

The reason? Walter Percy Chrysler wanted to add a car and truck line to his brand. He wanted a name that “country folk” (a.k.a. farmers) recognized as a quality and affordable item. Back then, farmers used a binder twine with the brand name “Plymouth.”

Concerning the Mayflower hood emblem, if you look at the emblem from the front of the car, it shows the rear of the Mayflower. So when the car is going forward, the Mayflower is going backwards. My guess is this was an intentional little “‘gotcha” by the marketing folks at Chrysler because the non-farmer buying public insisted the name Plymouth was to celebrate the Mayflower and Plymouth Rock.

A: Randy thanks much for another one of your great trivia question. (Randy is a well-known Cruise and Car Show organizer.)

Now here’s my Plymouth trivia. Did you know there was a Plymouth tractor? Yes, a Plymouth tractor was produced in 1933 and early 1934 in Plymouth, Ohio by the Fate-Root-Heath Co. It featured a 4-cylinder Hercules engine and a 4-speed transmission. It could do 35-MPH, which was very fast back then for a tractor.

Many Plymouth enthusiasts may not know the origins of the Plymouth name and the Plymouth tractor produced back in 1933 and early 1934. Shown is Korean War vet Norm Westervelt from Nichols, N.Y. at the annual Fourth of July Parade in Candor, N.Y., driving his 1934 Plymouth tractor. (Wendy Post / Owego Pennysaver)

However, this Plymouth was in no way produced by Chrysler Corporation and not related to the Plymouth line of cars. After building about 215 tractors, Chrysler stepped in and sued Plymouth tractor for unlawful use of name.

However, the tractor founders argued that they came up with the Plymouth name independently and won the lawsuit. Still, the founders of the Plymouth tractor agreed to give up its use of the name after an out-of-court settlement, and renamed their tractor the Silver King. (Probably a smart decision.)

(Greg Zyla is a syndicated auto columnist who welcomes questions on collector cars and auto nostalgia at greg@gregzyla.com.)

Be the first to comment on "Cars We Remember/Collector Car Corner; Car loving baby-boomer memories"