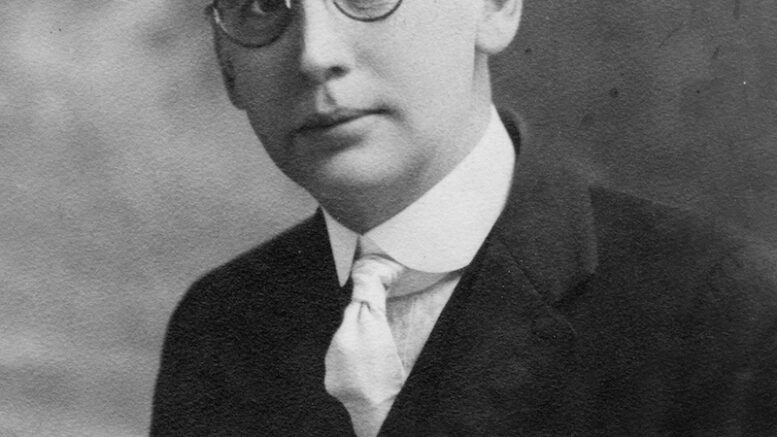 When a rare western Grebe was spotted in Sayre in 1936, assistant postmaster Earl Hammond was called to identify the strange bird. Hammond, recipient of the coveted Silver Beaver Award in scouting and father of World War II pilot George Hammond, is the featured subject of the Winter issue of the Sayre Historical Society’s Quarterly history magazine.

Other stories in the Winter issue include a 1906 letter that sheds light on the first schoolhouse in Sayre, a thesis paper by two Cornell students on a new water pump at the Sayre Water Company in 1894, and an account of the untimely death of J. Rex Stevens, heir to the Evening Times publishing company.

The Quarterly is a benefit mailed four times per year to members of the historical society. Individual copies are available through the Sayre Historical Society’s website at $3.75 per issue plus $2.99 for mailing. Copies are also available at Patty Mac’s Daily Dose newsstand in Sayre.

The Sayre museum is currently closed for the winter.

The cover story on Hammond is based on research of Valley newspapers and an account of his life from grandson Andrew Hammond. A number of photographs accompany the feature story.

Hammond was born in Virgil, N.Y. in 1879 and came to the Valley as a nine-year-old when his father, Ellery Hammond, took a job at the American Bridge Works in Athens.

Hammond joined the Sayre post office in 1907 and was appointed assistant postmaster following the death of Sawyer Weeks, according to the Oct. 4, 1943 Sayre Evening Times.

Hammond is credited with founding the section north of Sayre called Wildwood after a canoe expedition on the area’s rivers.

According to the family history account, “Hammond was an avid outdoorsman who loved hunting and fishing and was an expert canoeist. Sometime in the early 1900’s, he traveled by canoe from Tioga Point up the Susquehanna River to Owego and then back down the river to the Chemung and up that river to Elmira.” He settled on the area now known as Wildwood as a place to build his cabin. The settlement was originally called “Hammondsville.”

Hammond was also involved in archeology in the area including the 1916 Susquehanna River Expedition led by Warren Moorehead and a 1931 excavation at Wildwood. Hammond was married to Nellie Weaver, who was the daughter of J.N. Weaver, master mechanic at the original Sayre Shops in the 1880’s and Sayre’s first burgess.

A story on Sayre’s first schoolhouse is based on a 1906 letter from Valley surveyor Nathan F. Walker to William Goodnow, manager of the Sayre Land Company. “The first schoolhouse … was at Milltown, situated on the north side of Bradford Street and near the entrance of the Milltown Cemetery,” the letter reads in part. The log schoolhouse was built in 1790, the letter added.

The story on the Sayre Water Company’s “triple expansion pumping engine” was brought to light through the discovery of a bound hard cover thesis, written by two Cornell University students in 1894.

The thesis includes a history of the water company’s plant on Sayre’s East Side as well as the company’s new Worthington pump.

“The engine was built by the manufacturer to exhibit at the World’s Colombian Exposition, Chicago, 1893, but when the urgent call came from Sayre for a pump this one was sent and another made for the exhibition,” according to the account. Two photographs including an 1894 view of the pumping station accompany the story.

The death of 25 year old J. Rex Stephens in 1920 was described as “a hard blow” to the entire community. He was the son of Dana Stephens, who only three years before had purchased the Times-Record newspaper and had renamed it the Evening Times. Sadly, the elder Stephens passed away unexpectedly and handed the reins to his son who died only months later. He was called “a young man with the brightest of life’s prospects” in his Dec. 11, 1920 obituary.

A menu from the Chocolate Shop restaurant in Sayre and news items from the Valley Record newspaper complete the Winter issue. The center section of the magazine features Lehigh Valley Railroad steam locomotive No. 3271 in Sayre. The back cover shows a sketch of Sayre High School from a Class of 1948 commencement invitation donated by James Brennan.