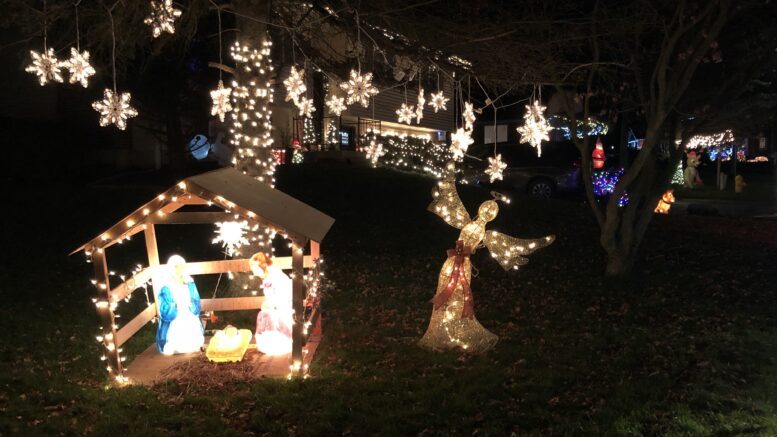 From Maryvale in Apalachin. The street was lit up - part tradition, part lighted driving tour. (Photo by Wendy Post)

Posted By: By Bernie Van Nostrand of Owego December 25, 2021

I like winter and all the snow, but it can be troublesome. Last year the snow was falling in the early morning hours of Christmas Eve, just days after the big storm left four feet of snow.

The people who grew up here like telling stories of snowfall from a long time ago when they were kids. The snow covered over the roof of the school buses and piled up to the second story windows. They don’t know why you worry about little bit of snow.

For one thing, the 300-foot driveway has to be plowed for an oil delivery and it takes a lot of finagling when two months after the storm there’s lots of snow left. This could last until spring.

On a bright sunny day in February my brother Paul called from Connecticut to tell me how much he liked the big screen TV he got for Christmas. He said you could see the eyelashes on the animals when watching the nature channels.

Maybe next year I’ll ask Santa Claus to bring me one of those. In the next instant, as we were saying goodbye, I saw something that could change my mind. It was later in the morning the snow was warmed up by the sun frozen over by a cold wind into a glistening glaze of rainbow colors. There was Sport, my red fox standing on top of the ice. His neck gracefully arched with his head held high. He hears something. The black markings of fur and the brilliant red coat stand out against the white snow.

I never saw Sport look quite so Regal as he stood there listening. In that moment it occurred to me that the living room picture window is my big screen TV. I can see the wind blowing through the trees, billowy white clouds in a blue sky full of sunshine. The occasional rainbow if the sun catches up to a summer rainfall. The ominous dark clouds of lightning and thunder. Snowfalls that turn my backyard into Antarctica with freezing cold sub-zero temperatures.

I can see all the birds and the woodland animals flying, prancing, scurrying, dancing, and tiptoeing to the quick tempo of my favorite music. They’re busy storing food for winter. They’re sunbathing on the deck railings under those billowy white clouds in a sky full of sunshine.

I knew them all by name. I was worried about them when the storm began. They hurried home with more food before the snow got too deep. What they stored through the summer and fall might not last until spring.

Cardinals and Chickadee dance on the fence searching dried weed for last summer’s remnants. Those rainbow colors in perfect order of light and water – red, orange, yellow, green, blue, indigo, purple, sparkling on the surface of this frozen tundra.

It’s easy for Sport, my red fox, to hunt over this icy top. Ziggy and Zaggy scurry and dig for the kernel of corn they buried taken from the crops planted in the summer by a hard working farmer. Deer eat the plum leaves still hanging on in the cold off the fruit trees I planted ten years ago. I can hear the sweet sound of a morning dove’s coo shielded from the wind inside of the Norway spruce. They wait for sunrise then risk the cold to peck at the sap on the sunny side of the maple trees.

Snowy fields of corn melt in the afternoon sunlight to welcome a Flock of Canadian Geese coming in from the cold sky tonight. Basking in the warmth of the field, rejuvenated by the abundance of corn morning will bring that jamboree of awakening sound when they take flight on their way southbound.

Mistletoe mole is tiptoeing all over the place from the top of the bank where he lives under the plum tree, carrying a basket made out of Mulberry leaves down into the swale. He’ll bring it home full of food for Christmas Eve.

Mistletoe was in his workshop all summer making something for his children, a pine bark toboggan for Christmas. He wrapped it all up with red and green leaves tied with willow twig, and then he left it under the Alberta spruce tree for his children to find on Christmas Eve.

Happy Holidays with a kiss from the Mistletoe family.

Ahh Francois, that Chivalrous Chipmunk works in the Hemlock gathering pine nut for the long winter, storing groceries for the cold days ahead, preparing a Christmas dinner for his family and friends. Did I mention Francois is a Chef?

Every year on Christmas Eve Santa Claus delivers our presents and fills our stockings with treats, but even Santa Claus relies on the birth of our savior to deliver the feeling of Peace.

Every year on Christmas Eve the Woodland animals watch the North Star blinking their eyes in the dark, nervously crisscrossing back and forth they seem to know why this night is so quiet and the Star is so Bright.

Tomorrow is Christmas morning. I can see their eyelashes; it looks like millions of Christmas lights flashing right outside of my living room picture window, we’re sharing in the joy of today’s Christmas Miracle.

1 Comment on "Sharing the joy of a Christmas Miracle"