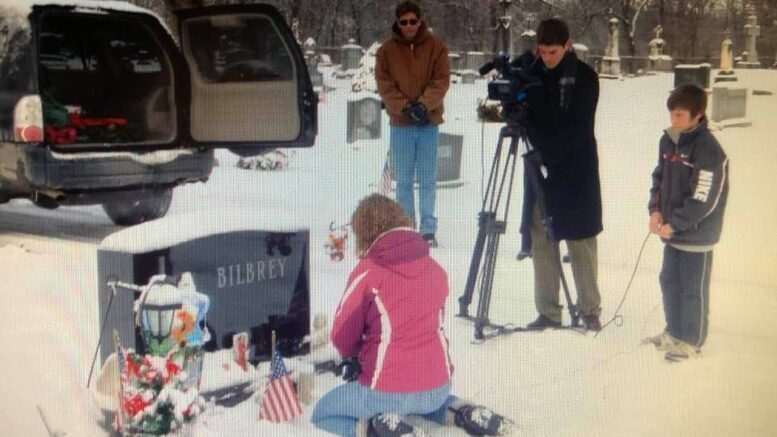 In this photo from 2020, Gold Star Mother Barbara Bilbrey kneels in the snow at her son's grave and tells him how much she and her family love and miss him, as his dad and brother watch and WBNG TV films for weekend air. (File Photo)

Owego / Tioga County has 76 Fallen Heroes from all wars. They eternally rest in 26 Tioga County cemeteries among an estimated 5,000 who proudly wore the uniform.

Wreaths Across America is a 29-year-old national program to REMEMBER the Fallen, HONOR those who served and TEACH the Value of Freedom. The mission: place an evergreen wreath at a veterans headstone, say his name out loud, and thank him for his service and sacrifice.

The Owego / Tioga County Wreaths Across America Program is four fold for the 14th consecutive year. 1) Wreath on 76 Fallen Heroes Graves. 2) Wreath on as many veterans graves as possible. 3) Wreath posted to the entrance of each cemetery to remember veterans resting inside. 4) Wreaths at veteran memorials.

How is this done? By patriotic interested volunteers and voluntary financial response from the community. More business donations like Owego’s Price Chopper and Weitsman Recycling / Shredding., clubs and organization, and by self motivated patriots who take the lead because “it’s the right thing to do!”

Like Kathy Briggs of Newark Valley, she adopted Hope Cemetery in Newark Valley last year. She plans on doing it again this year. Her goal is to place 50 wreaths or more. Last year it was 37. It would be wonderful if others do what they can in the cemetery of their choice.

Look at the 250,000-plus wreaths in the December snow at Arlington National Cemetery. Understand 1.7 million wreaths are placed in over 2,557 participating locations nationwide, at sea and abroad. Our WWII Fallen Heroes in Europe also receive wreaths in military cemeteries.

Owego / Tioga County Never Forgets Her Fallen Heroes. A Fallen Hero is a young man in the prime of his life killed in action. The military returns him in his flag draped casket with dog tags. A community mourns. There were many at the Broome County Airport when his plane landed for the procession to Owego. Also a record number of mourners refusing to leave despite the long line at his wake at the Estey Munroe Fahey Funeral home and overflow church funeral.

American flags decorated the sides of Main Street for the slow funeral cortege trip to the Town of Tioga cemetery. Commendation burial service by St. Patrick’s Parochial Vicar Rev. John DeSocio, a retired Navy Commander, a Memorial service by the VFW Post 1371 Honor Guard were part of the service. The folded in a triangle American flag was presented to Gold Star Mother Barbara Bilbrey. Then – a rifle volley, ending with the haunting sound of Taps. You’re left limp. A Fallen Hero has returned home to eternally sleep.

Fast forward to a cold snowy December day. Gold Star Mother Barbara Bilbrey kneels in the snow at her son’s grave and tells him how much she and her family love and miss him, as his dad and brother watch a WBNG TV photojournalist.

Mom then places a fresh green Christmas wreath with red bow at the headstone of the Bronze Star and Purple Heart Recipient. This wreath laying and remembrance by his mom’s saying her son Charlie’s name out loud and thanking him for his service and sacrifice in Iran is what the Owego / Tioga County Wreaths Across America is all about. All Fallen Heroes deserve a remembrance wreath at Christmastime.

POW/MIA aren’t forgotten either. Veterans would love to have a downtown merchant donate space or a window to display the POW/MIA Table and Chair with a Christmas wreath. Tioga County still has four in North / South Korea and two missing at sea from WWII.

Someone may want to have six wreaths on a stand to recognize the different branches of the military and place in front of a cemetery where there’s lots of traffic. Suggested locations, but not limited to, are Nichols Cemetery, Riverside in Lounsberry, Maple Grove in Candor, Tioga or St. Patrick’s Cemetery, Hope Cemetery in Newark Valley, Evergreen in Berkshire, Barton Cemetery, Riverside in Apalachin, and others that make a good visible sight.

Make this year’s wreath season with the slogan, “Live Up To Their Legacy,” a very community oriented program. Students from schools could figure out creative things to do. Students could earn community service hours while also helping to honor our veterans.

Wreaths Across America started in 1992 as a small gesture that has grown into a national movement to remember the fallen and also teach the next generation of the sacrifices made for Americans to live freely.

From the Revolutionary War to present day conflicts, veterans are devoted sons and daughters, fathers and mothers, sisters and brothers. They come from all backgrounds in life to place their lives on the line for our freedoms.

Place a fresh balsam veterans wreath, to honor all veterans laid to rest, on or before Saturday, Dec. 18, and as part of National Wreaths Across America Day.