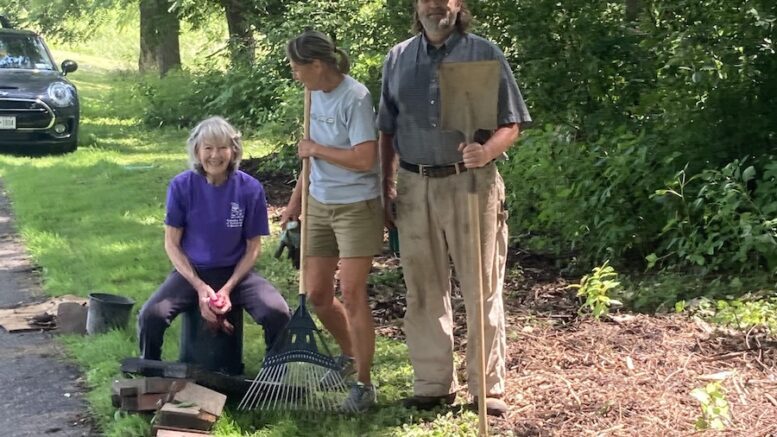 Several Rotarians work on the Canawanna project to remove invasive plants and do some planting. Provided photo.

You may have noticed people working in the area of the Village of Owego known as Canawanna and cleaning up there, removing some of the invasive plants and doing some planting.

Canawanna gets its name from a Canawanna Road that used to be in that area. Canawanna is the area bordered by Water Street, Canal Street, Mill Street, and River Road; there is also a street through the middle of the area called West Front Street.

Owego Rotary has undertaken a project to celebrate 100 years of service by the Owego Rotary. A hügelkultur has been built and planted with milkweed, and other native plants that attract and feed pollinators like butterflies and bees.

There are paths through the wooded area that are marked by white Rotary signs. There are plantings of shrubs that produce berries that birds eat. Plants to improve wildlife habitats that have been planted are arrow-wood, blackberry, currants, elderberry, hackberry, nannyberry, elderberry, and raspberries.

A 70-foot-long wildlife hedge that supports birds, pollinators and other wildlife has been planted along Water Street. It consists of hazelnut, rosa rugosa, high bush cranberry, spice bush, and buttonbush. These plants provide food for birds and other small wildlife.

Canawanna was once a prosperous industrial area when waterpower was the primary source of power. There were two water powered grist Mills on the northern part of the area on Main Street.

The Rotary hopes to learn more about the history of Canawanna and share it with the public. Canawanna is prone to flooding and is in the floodway. The project was originally envisioned as a food forest, mostly food for human beings; but after discussion it was changed to be a nature preserve, because a nature preserve can feed animals, birds, and people.

The Rotary will be planting native trees like apples, chestnuts, pawpaw, and persimmons.

There have been several tours through the area to identify plants, both native and invasive. Native plants produce more nutritional content for birds and animals, and have co-evolved with birds to bear fruit when birds are returning from migrating south in the winter. Invasive plants are less desirable as wildlife habitat restoration and are being removed.

The primary invasive plants are honeysuckle, rosa multiflora, privet, garlic mustard, and knotweed. Invasive plants often have the competitive advantage of being unpalatable to wildlife and leafing out earlier than natives in the spring thus shading them out.

Be the first to comment on "The Canawanna area of Owego"