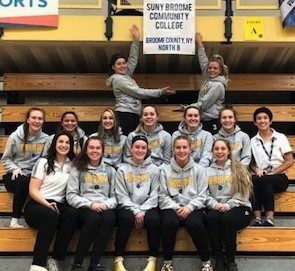 Pictured is the SUNY-Broome Volleyball team. Five players represented on the team are from Tioga County, N.Y. including one from Tioga, and four from Owego. The team finished a successful 2021 season and then advanced to the NJCAA Division III Volleyball Championship, where they finished fourth. The team also received the Division III National Championship Sportsmanship Award. Provided photo.

The SUNY-Broome women’s volleyball team had reason to celebrate in 2021.   They concluded their regular season undefeated and went further than their predecessors on the quest to nationals.

Incredibly, the team only lost three sets all season, and quite impressive too, with the Tioga County players comprised of three freshman and two sophomores.

SUNY-Broome rolled into post-season play as the number one seed at the Region III Championships at Niagara County Community College.

At Niagara, Broome went 3-0 in Pool B play defeating Adirondack and Finger Lakes Community Colleges, along with a third win over Jefferson. 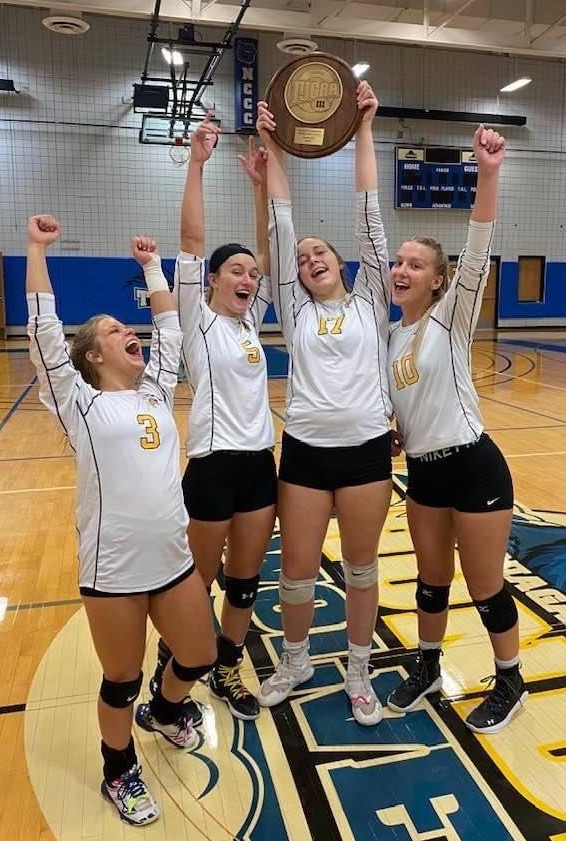 The team then advanced to the 2021 NJCAA Division III Volleyball Championship held Nov. 11-13 in Rochester, Minnesota.

The Hornets, although strong on defense, lost to #1 seed Rock Valley in the semifinals. This match marked the furthest any SUNY-Broome volleyball team has gone in the national tournament.

Sara Zepkowski was named to the All-Tournament Team. The Hornets also received the Sportsmanship Award, which recognized their enthusiasm and passion on the court.

Ashleen Speen, Head Women’s Volleyball coach at SUNY-Broome, shared, “This was my first season as head coach and it definitely exceeded my expectations,” and exclaiming, “I had a great group of athletes, and all had two common goals – to out-team everyone else and to go to nationals. They accomplished that for sure.”

Regarding next season, Coach Speen explained that going to nationals and placing fourth in the tournament is a high standard to uphold for any future team.  She believes that it will always be a goal, but the team atmosphere and support for one another is what she would strive for each year.

The coach concluded, “I’m hoping to have my first year athletes from this season come back so we can improve into a faster, stronger and more disciplined team, and having them return would set the foundation for success,” and added, “They are so competitive and motivated, it is hard not to be excited for what is to come next season.”

Be the first to comment on "Serving up success!"