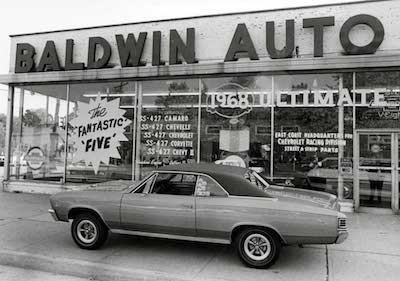 Can’t forget the other performance Chevrolet dealers that specialized in Central Office Production Order (COPO) cars, resulting in 427 big blocks being installed in the entire Chevrolet line. Baldwin Motion in New York is shown here, with the others being Yenko Chevrolet in Pennsylvania and Dana Chevrolet in California. (Compliments Baldwin Motion)

Q: Hello Greg, my name is Angelo Bovara. My older brother is Louis and in the 1960s we all lived in Illinois. I remember Louis bought a brand new 1968 Camaro RS SS (big block) with a factory aluminum head option. That option and a Holley 3-barrel carburetor was all he talked about back then.

I was only 11 or 12 yrs old, and Louis was 21. I remember the car was a 4-speed, dark green, white stripes, and hounds-tooth interior with all the gauges, fully loaded. It had Mallory ignition, Sun tachometer, fuel cool can, headers, traction bars, slicks, and dyno tuning. He had it all on and that Camaro was a beast. All work was done at a Chevy dealer known for performance. However, it never went to the drag strip.

When Louis had that Camaro, it was his only car and he made a lot of trips from south of Chicago suburbs to Milwaukee where his girlfriend and future wife lived. Then in 1970, my brother put a big ad in the newspaper under cars for sale. Two guys came to look at it, but they didn’t want to buy. They wanted to race Louis for some big money. They had a trailered racecar with a dual quad tunnel ram.

Louis took the win and the money. However, Louis said the other car left two thick black marks for two blocks from their slicks and admitted if they had hooked up he would have lost that race. He eventually traded the Camaro in for an F250 Ford pickup.

Before the Camaro, Louis had a new triple black ‘67 Firebird 400, 4-speed. He gifted it to my other brother. To get the Firebird he traded in a ‘66 Buick Rivera. 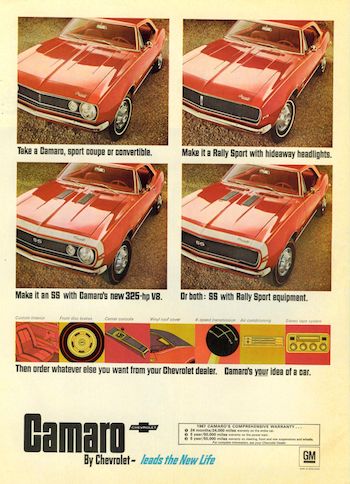 The 1968 Camaro SS/RS was a combination of both the Super Sport and the Rally Sport. Available were several engines, from a tame small block all the way up to the ultimate L89 396/375, which came with aluminum heads. (Compliments Chevrolet)

So, how did a 22-year old brother start buying expensive cars? Well, Louis was and still is a very special person. However, when Louis was in sixth grade he was goofing around near a train, and I mean a real train! The train cut off his big toe, and in 1967 he received a settlement for $66,000, and that was after lawyer fees. He was 21 years old when he gained control of the money and that’s when he bought the new Firebird 400 and how he paid for the toys.

I am 65 years old now and retired. See my Instagram at #angelobovara. All I have these days is a small dog who bites and a supercharged C6 Corvette with over 600 rear wheel horsepower that also bites if you let it.

Take care and stay healthy and I enjoy your writing. Angelo Bovara, still in Illinois.

A: Angelo thanks for your interesting email. Since you might not remember the Chevrolet dealer Louis brought his car from, and the fact that you lived in south Chicago and it had a 3-barrel Holley carb on it, I’m going to go out on a limb and say your brother purchased his Camaro from the famous Nickey Chevrolet, where Dickie Harrell prepared many a Camaro big block with either the 396/375 or the COPO 427 big block under the hood.

Nickey Chevrolet in Chicago receives credit for being one of the very first specialized Chevy performance dealers in the country. Famed racer, the late Dickie Harrell, also known as Mr. Chevrolet, receives credit for pushing ahead with these specially built Chevrolets beginning in 1967. Nickey was sold in 1973 and became Keystone Chevrolet, although modern day Nickey Chevys still exist built by independent concerns. (Compliments Nickey)

The 427 was a dealer install with 100% Chevrolet’s blessing and they were, like you say, “a real Beast.” I know the 3-Barrel was very popular back then as I had one on my ’67 GTX and to this day still have the carb, and also received the special Edelbrock intake manifold from a trade with a friend. Back then I remember Baldwin Motion in New York also utilizing the Holley 3-Barrels on several of their specialty Central Office Production Order (COPO) Novas, Chevelles, Impalas, Corvettes, and Camaros.

As you mentioned in your email (which I had to edit down just a bit), I, too, had a “beast” of sorts, mine being a ’68 SS/RS 396/375 in a beautiful metallic blue with white stripes. All my photos of my streetcars from back then were unfortunately thrown away and I had a great one of it sitting in the driveway with slicks on, awaiting a race that evening. (I won, too.)

Nickey reversed the letter K in the mid-sixties, and to this day it’s one of the most respected names in Chevrolet high-performance. (Compliments Nickey)

As for the aluminum heads, in 1968 you could order an L89 396/375 option, which added the aluminum heads. This L89 option was costly at $868, but it sure saved weight. Thus, your brother’s Camaro could have been an L89 and a very rare one at that, as only 272 were ever built. If it was a Nickey COPO 427, then it was a very special high-dollar car that today goes for six-figures at the auctions.

Thanks for your great story Angelo, and kind words.

(Greg Zyla is a syndicated auto columnist who welcomes reader input on collector cars, auto nostalgia and motorsports at greg@gregyla.com.)

Be the first to comment on "Cars We Remember – Aluminum head 68 Camaro SS; and more COPO memories "