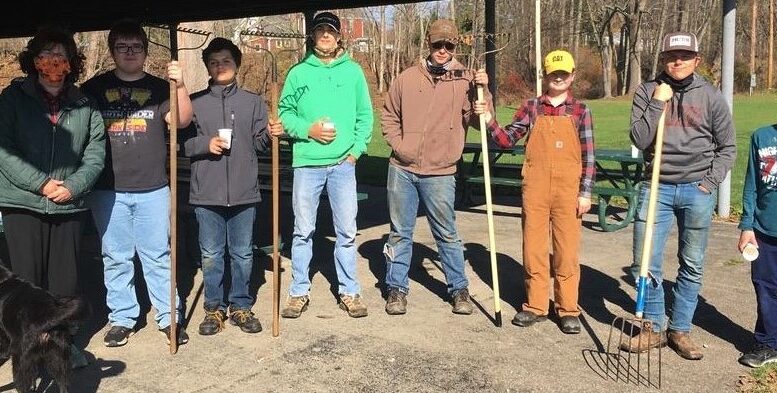 Members of Boy Scout Troop 30 out of Newark Valley, N.Y., and all who helped work on the Trout Ponds Fitness Trail, gather during the summer of 2020. Provided photo.

When it came time for John Boldis to draft plans for his Eagle Scout service project last year, he was pretty focused on one particular idea.

Boldis recalled spending time with family at Sampson State Park several years ago.  It was there he was first introduced to the challenges of a fitness trail, and started formulating a concept in his mind about how to build his own. 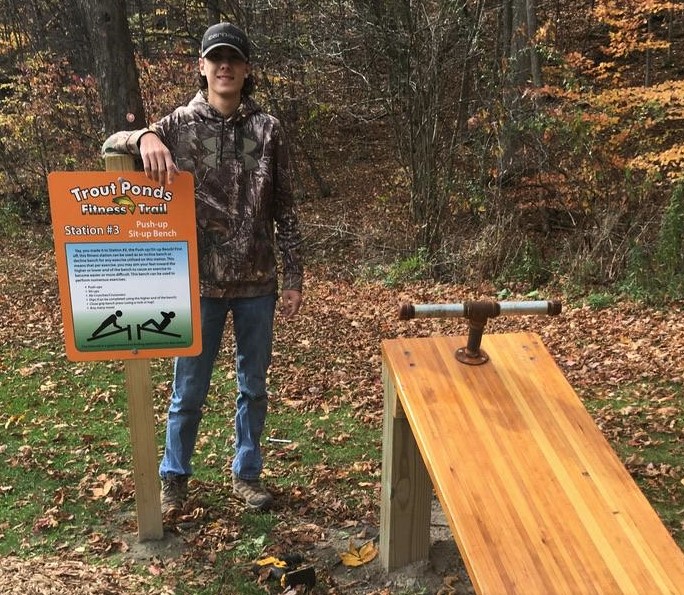 Pictured is Eagle Scout, John Boldis, after completion of one of the Trout Ponds Fitness Trail stations, the push-up / sit-up bench. Provided photo.

Boldis, along with a team of helpers, is proud to have completed the Trout Ponds Fitness Trail at Trout Ponds Park in Newark Valley, N.Y. at the end of summer in 2020.

Boldis, a member of Boy Scout Troop 30 since joining as a Cub Scout in elementary school, is now a senior at Newark Valley High School. He received his official Eagle Scout Award via a Zoom presentation earlier this year. A ceremony to honor his achievements will be planned in the near future. 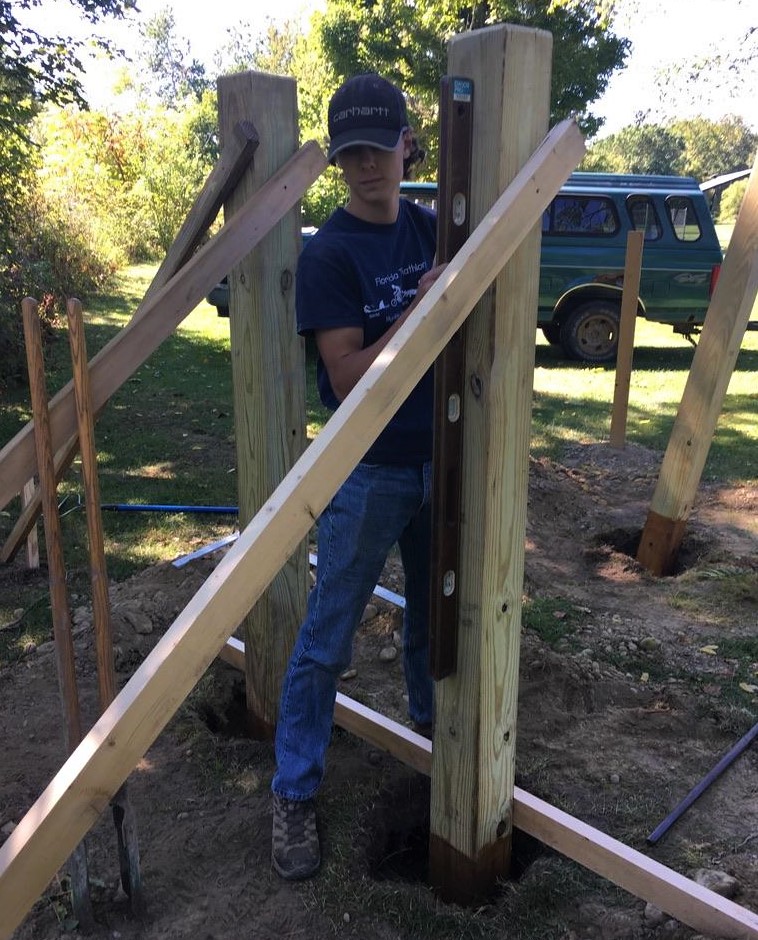 Pictured is Eagle Scout, John Boldis, during construction of one of the Trout Ponds Fitness Trail stations, the parallel bars. Provided photo.

Getting the project off and running was a bit difficult in early 2020, and especially since Scout meetings had been canceled for a few months due to COVID. But once he got the green light, Boldis quickly went to work.

By July, Boldis had arranged help from upwards of 15 people, including a handful of adults. A core crew of about six Scout members gathered on several Sunday afternoons to dig in and build the fitness trail.

Trout Ponds Park is a Newark Valley go-to for special events and family gatherings, and is a favorite for outdoor enthusiasts.

Boldis remarked, “I grew up there,” and as it turned out, it seemed meant-to-be and the perfect location to bring his project to life.

The pieces all fell into place, too, when Boldis presented the project idea at a Village Board Meeting. Officials were genuinely positive about it, he noted, and saw it as an added value for the community.

Cliff Alexander, Newark Valley’s deputy mayor, commented, “The Village actually had thoughts of a walking trail, so John’s design fulfilled that,” adding, “The Village only approved John’s plans, he oversaw the work and its completion, so it was a win-win.”

A win-win, too, since a part of the criteria for Eagle Scout service projects is that they provide a benefit to the community. Another win-win is since 2020 sparked a renewed interest in people to participate in outdoor physical activity, the fitness trail provides a much-needed outlet. 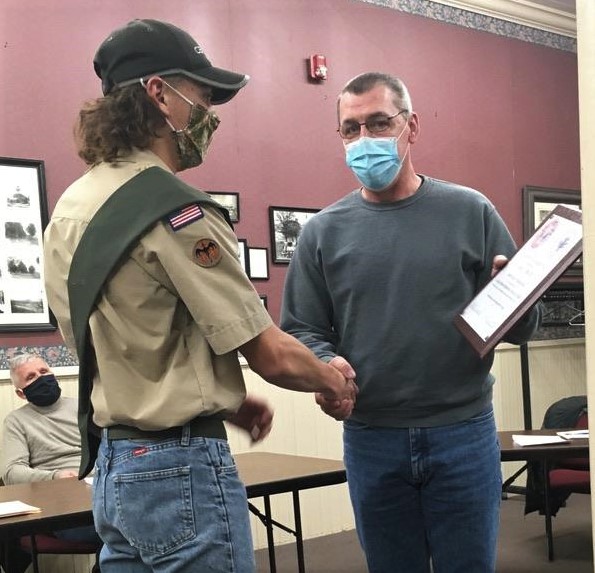 Alexander shared that the fitness trail has been used regularly since its completion, and Boldis said that he noticed activity even during the recent winter months.

Boldis remarked, “The trail was built in hopes of bringing the community of Newark Valley closer through staying active.”

The Fitness Trail, an approximate one-mile loop that traces the perimeter of the park grounds, features five stations. Stations include a stretching and warm-up area, pull-up bar, a push-up or sit-up bench, parallel bars and a balance beam.

Materials used, Boldis said, were purchased from a large home improvement retailer that has partnered with the Boy Scouts of America to give a 50 percent discount toward Eagle Scout project materials. Boldis extends special thanks to the Owego Elks Club for their generous donation, and also thanks many others who contributed. 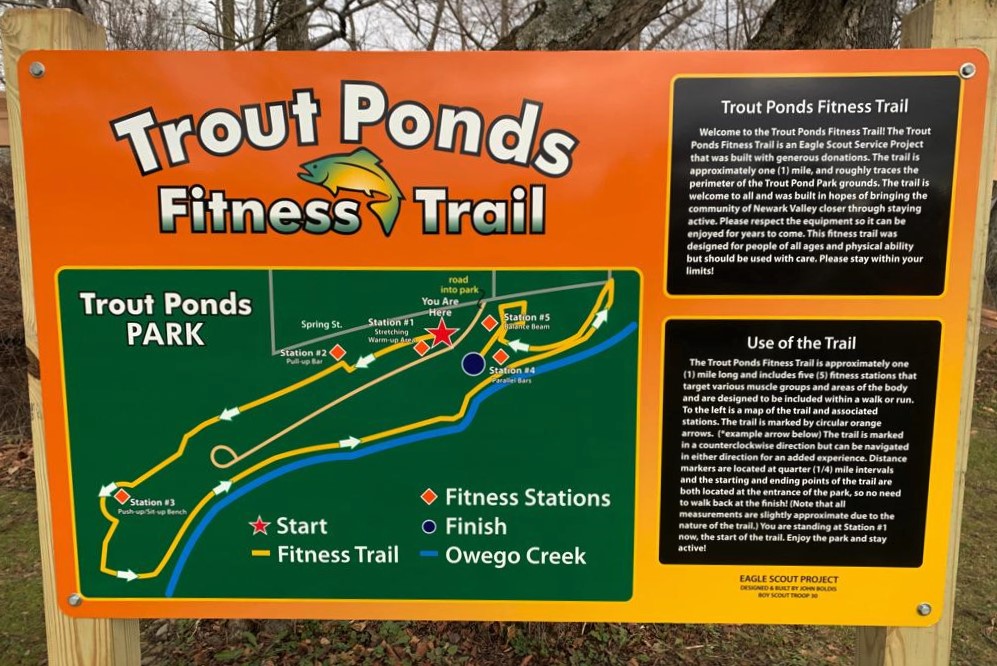 A custom sign welcomes visitors to Trout Ponds Fitness Trail in Newark Valley, N.Y. John Boldis designed this sign, along with others, for his Eagle Scout project. Provided photo.

All stations were built from scratch, and concrete was poured to secure pieces into the ground. Boldis worked with a sign company to incorporate his designs into one custom-made welcome sign along with several station signs, and all of which can be found at quarter-mile intervals along the trail.

Visitors are asked to respect the equipment so that they can be used and enjoyed for years to come. Trout Ponds Park is located at 44 Spring St. in Newark Valley.