ony Hulman saved the Indianapolis Motor Speedway when he and his family purchased the run down raceway in 1945 following World War II. He turned it into the biggest and most prestigious race facility in the world. Today Roger Penske is at the helm after a November of 2019 purchase. Pictured is Hulman back in 1968 holding a microphone and ready to say, “Gentleman, start your engines.” Hulman passed in October of 1977. (Compliments Indy Motor Speedway)

Q: Greg, I look forward to your articles on collector cars every week and also enjoy that you touch on auto racing at times, too. However, I suspect you are sometimes too in favor of racing when you should be complaining or bringing up how NASCAR or IndyCar have screwed things up more frequently than you do. The NHRA also deserves to be criticized for how they’ve handled things especially the last several years. Am I right? Don L., Columbus, Ohio.

A: Don, first and foremost thanks for reading my columns on a regular basis. To answer your question, I’m always in favor of shining the best light I can on auto racing in general, but I do not shy away from being critical when necessary. If I feel sanctioning bodies have made mistakes or questionable rule changes, I have replied in print many times over the years. These columns are all out there on the internet which you can track down easily with a search or by visiting my homepage at greg@gregzyla.com.

However, I want to emphasize that for whatever reason, there are too many complainers out there that will complain about anything be it rules, cars, TV production, announcers, commercials and even the before race invocation. Complainers will take the major sanctioning bodies to task for reasons I just can’t understand and I guess it’s true that many people just love to complain.

Further, why would anyone want to complain after enduring the most difficult COVID-19 year we have just gone through? I was thrilled to see the packed grandstands Sunday, March 13 and 14, at the NHRA Amalie Motor Oil Gatornationals in Florida. It helps us forget that racing pressed on in 2020 and did the best it could to get its races in, with no fans in the stands. Every major sport, not just racing, needs fans in the stands to pay the bills. 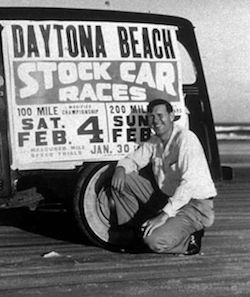 When Bill France Sr. organized a meeting at the Streamline Hotel in Daytona Beach Fla. back in late 1947, the end result was the formation of the National Association for Stock Car Auto Racing (NASCAR). He and his family would lead the company into the most successful auto racing organization in the world. France Sr. passed away in June of 1992. (Compliments NASCAR)

Whereas the major league sporting franchises had enough monetary strength to run a season with no fans in the stands, most of the smaller racing facilities did not fare as well. Many of the local race tracks needed the fans even more so because at the end of the night most promoters rely on the sales of hot dogs and French fries to make a decent profit after racer purses and employees are paid.

As for complaints over the years, I’ve had and still have many. I think that NASCAR’s “playoff” way of determining a champion is not as good as the old, every race is just as important way. The season long point system worked, and I agree its new stage racing format adds excitement. Stages also give everyone a little break and that’s all good. I doubt NASCAR will ever go back to a season long point deal, and I’ve written several columns why I feel this current system could crown a champ that got hot at the right time, qualified on points, never won a race and then wins the overall NASCAR Cup. It’s possible and if it ever happens fans and competitors (except the team that won) will go crazy with complaints. Granted, a driver could win without winning a race the old way, but the champion would still have earned it by a year of consistent top finishes.

Another NASCAR complaint? Why is Smokey Yunick not in the NASCAR Hall of Fame? I think it’s time to end the hard feelings and do what is right. Complaints or not, I’m thankful that back in 1948 Bill France Sr. formed NASCAR and it has grown into the major sport it is today.

Now just imagine how difficult it was for the NTT IndyCar Series in 2020. Granted, the self-inflicted wounds of split sanctioning bodies and owner turmoil during the USAC-CART-IRL days from the 1970 to 1990 decades didn’t prepare anyone for what was to transpire in an attempt to bring IndyCar back to top flight prominence. When “The Captain” Roger Penske put his money on the table and purchased the entire IndyCar series, including the Indianapolis Motor Speedway and the NTT IndyCar sanctioning body in November of 2019, no one knew what was just ahead that would cause worldwide shutdowns.

The excitement that Penske would be in charge, hire all the right people and finally take IndyCar racing back to its rightful place of popularity came to a screeching halt as the Covid pandemic hit. Still, as mentioned in my recent Racing 2021 article, Penske dug deep into his own pockets and not only did we have an exciting season of IndyCar racing to enjoy on TV, he presented the Indy 500 with no fans in the stands. (Thanks again Mr. Penske.) 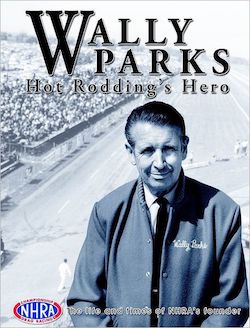 Wally Parks founded the National Hot Rod Association in 1951 and guided its growth through six decades. The NHRA, after a dismal 2020 season due to the pandemic, kicked off the 2021 season March 13 to 15, 2021, with packed grandstands at the annual Gatornationals in Gainesville, Fla. Parks passed away in September of 2007. (Compliments NHRA)

IndyCar complaints? Sure I have them, but not when it comes to actual racing excitement. I’m still not sold on why an IndyCar has to go 240-MPH around the Speedway. I feel the same about drag racing, too. Do we really need 325-MPH on a 1,000-foot track? It costs tons of money to accomplish acceleration like this and the stress on the nitro funny cars and dragsters is tremendous. We’ve been very fortunate when it comes to doing things like this, and I hope our luck continues where it comes to driver safety (and spectators, too). Ditto for the pack racing at Talladega and Daytona. Yes its exciting – very exciting. Yet for the betterment of the sport we should all take a deep breath and perhaps consider slowing these cars down even more.

In ending, I‘ll never criticize Tony Hulman (IndyCar savior after WWII), Bill France Sr. (NASCAR founder) and Wally Parks (NHRA founder). Their efforts in organizing and then successfully presenting the continuous racing that all of us, complainers included, enjoy on a weekly basis is most appreciated. Racing has been around a long, long time. Back in the day, fans packed the coliseums for the weekly chariot races and it has evolved into what it is today – a multi-billion dollar sport and entertainment industry with no peers. I’ll always call an ace an ace to my readers, but my lifelong love of motorsports is intact and solid. It will never change.

Want to complain? Get in line. These endeavors have way more to gripe about.

(Greg Zyla is a syndicated auto columnist. He welcomes reader questions and comments on collector cars, auto nostalgia and motor racing at greg@gregzyla.com or at 303 Roosevelt St., Sayre, Pa. 18840.)

Be the first to comment on "Collector Car Corner – Auto racing: to complain or not to complain"