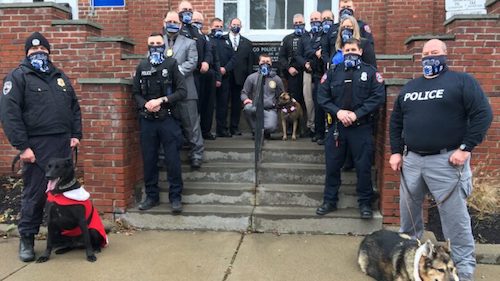 Owego Police Department members, and their K-9s. A December 2020 story, located at www.owegopennysaver.com/PS/2020/12/08/owego-police-department-meets-challenges-of-pandemic-year/, highlights the challenges faced by the department in 2020. (File Photo / Wendy Post)

Last Tuesday, the Village of Owego Trustees held a special meeting to reenter police reform talks and to gain community input as lawmakers draft their Police Reform and Reinvention Collaborative, as required by Executive Order 203 signed by Governor Andrew Cuomo last June. The plan is due to Albany by April.

The meeting was called to offer a presentation by the police department from a week earlier, except this time with more participation. The earlier meeting, for some reason, did not attract the numbers desired for community conversation; the Feb. 23 meeting saw approximately 18 in attendance.

Owego’s Police Chief, Joseph Kennedy, and Officer Jeff Winchell were available during the zoom meeting to offer an overview of the department, and offer the results of their own survey.

Currently, the department has a Chief, three full-time officers, a couple of officers that were called back from retirement, 15 part-time officers, an investigative specialist, and a discovery officer.

Officer Winchell talked about an increase in domestic violence calls, as well as mental health calls. Because of New York State cutbacks in providing assistance for these types of calls, according to Winchell, the local police are left to handle it.

Answering Mental Health calls has been a huge topic of discussion in various police reform meetings, as well as a need for continued training required to deal with challenging situations.

An example of this is the March 2020 death of Daniel Prude in Rochester, N.Y., where officers were called to a scene where someone was having what is referred to as a “mental health crisis.”

According to an investigative report by the State’s Attorney General, Letitia James, Joe Prude, of Rochester, contacted 911 and reported that his brother, Daniel Prude, had run from Joe Prude’s home, wearing only pants, a t-shirt, and with no shoes. He also advised that his brother had been taken to Strong Memorial Hospital and released hours earlier and had been suicidal.

The investigation continued to cite that when members of the Rochester Police Department arrived at Joe Prude’s house in response to the 911 call, he advised that his brother was on “PCP,” which Patrol Officer Mark Vaughn broadcasted over the air for responding officers to be aware of in case they encountered Daniel Prude.

When police located Daniel Prude, they placed a spit sock over his head and held him to the ground using a stabilization technique called Segmenting,

In the meantime, Daniel Prude fell silent, and it was observed that he did not appear to be breathing, so they rolled him on his side.

Paramedics became involved, but after CPR was applied, Daniel Prude never regained consciousness and was removed from life support on March 30 of last year. The cause of death, according to the Monroe County Medical Examiner, was deemed as complications of asphyxia in the setting of physical restraint; excited delirium, and acute phencyclidine intoxication.

Last week a grand jury voted not to indict any of the police officers. The Attorney General stated, following the announcement from the court, “Daniel Prude was in the throes of a mental health crisis and what he needed was compassion, care, and help from trained professionals. Tragically, he received none of those things.”

Some area residents, like Laura (Rodd) Young, who recently returned to the area and remains a strong supporter of the Owego Police Department, discussed the issues surrounding mental health and domestic violence, and saw those as an area of focus, and possibly where grant money could be discovered to assist in funding further training.

The good news for advocates of reform is that the police chief in Owego is fully engaged in discussions, has moved forward with a survey on his own, and has now made a couple of presentations and is open to ideas and suggestions on how policing could be improved within the village.

With Fran Bialy, from A New Hope Center; members of Owego for Equality; and various community residents and representatives on hand for Tuesday’s meeting, the group was able to converse around the issues; police were able to hear concerns; and the consensus recommended a committee be formed under the village to work alongside the police with any changes or reforms. Owego’s Police Chief, Joseph Kennedy, agreed to participate.

Videos from the zoom meetings held, and any future communication is available at www.villageofowego.com, according to Village of Owego Mayor Mike Barratta.

For more information on the Owego Police Department and their survey, you can visit them at www.villageofowego.com/police-department, or on Facebook.

As of Friday, the reform and reinvention plan is still being drafted, and talks about the process are currently ongoing with input from other emergency workers. Plans are due to Albany by April 1.