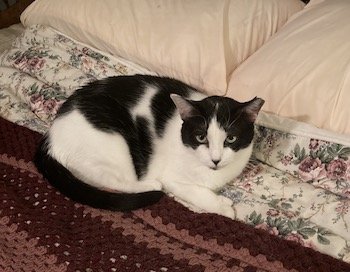 I picked her up in Ulster, Pa. in the winter of 2015 with 39 other feral cats. The woman who called me said she was being evicted and she had been feeding a feral cat colony for several years, and she obviously couldn’t take them when she didn’t even know where she was going. She couldn’t leave them because nobody else would feed them and the other person that lived there didn’t like them.

Since I am an impulsive person and don’t always think things through, I went and got them. About six to eight trips to Ulster, Pa. later and I had taken 40 feral cats or kittens. I did find a few people who would take some of them after I got them fixed and their shots, etc., but the vast majority came with me. They all started out here in cages, now no one lives in a cage.

Marbles had an abscess on her back when I brought her here, and that healed nicely. You will notice that her left ear is tipped. If you are trapping / neutering and releasing feral cats, you tip their left ear as a sign that they have been fixed. Five and a half years later she has adjusted nicely.

She loves the other cats, but still finds me to be highly suspicious. I don’t think anyone else has ever seen her. If strangers come around, she hides.

Be the first to comment on "Maddie’s Meadows Pet of the Week for the week of February 28, 2021"