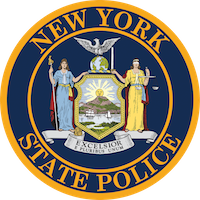 Earlier this month, the New York State Police at Endwell arrested a man twice within three hours, each time for Driving While Intoxicated.

According to a press release made available by the police on Wednesday, New York State Police at Endwell arrested Ala A. Alguhem, age 21 of Endicott, N.Y. on Feb. 16, 2021, at approximately 11 p.m., for the misdemeanor of Driving While Intoxicated.

According to the release, a trooper was monitoring police radio traffic when he heard that the village of Endicott Police were investigating a hit and run that just occurred. While searching the area for the vehicle, the trooper and an officer from the village of Endicott Police Department spotted the car stuck in a snow bank on East Main Street in the town of Union. The operator was attempting to get the vehicle out of the snow bank.

After an investigation, Alguhem was arrested for DWI; his reportable B.A.C was .10%. Alguhem was processed and issued appearance tickets to the town of Union court on March 9, 2021, and was then turned over to a sober third party.

A few hours later, on Feb. 17, 2021 at approximately 2 a.m., New York State Police at Endwell arrested Alguhem a second time, for the misdemeanor of Driving While Intoxicated. Troopers on patrol on North Street in the village of Endicott spotted a speeding vehicle and realized that it was the same vehicle that Alguhem was driving earlier.

The troopers caught up with Alguhem after he turned onto Oak Hill Avenue then drove through the Price Chopper parking lot, and then back onto North Street, according to police. Alguhem pulled behind a residence and began to exit his vehicle when troopers asked him to stay in his vehicle.

Alguhem was arrested and transported back to State Police at Endwell. He was then transported to Broome County Central Arraignment and Processing.

Be the first to comment on "Endicott man arrested for DWI twice, hours apart"