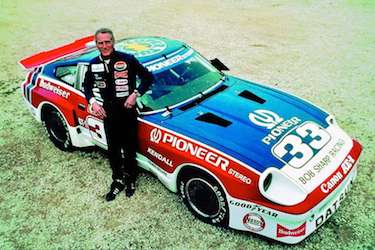 This photo was used on the cover one of Paul Newman’s first ever auto racing press kits. He is shown with his Bob Sharp Racing Datsun Z racecar, sponsored by Pioneer. (Greg Zyla collection)

Instead of answering a question this week from readers, I’m switching things up a bit. Late Friday night, Feb. 12, Paul Newman’s Hole in the Wall Gang Camp for sick children in Ashford, Conn. was hit with a major fire that destroyed several of the buildings. So, we’re devoting this week’s column to Paul Newman and hopefully assist in the camp’s rebuilding effort. (I’ll tell you how later.)

Being that most people immediately recognize the late, great Hollywood star’s name, there’s much to learn about Paul Newman when it comes to major league auto racing and most important, Newman’s legacy as a philanthropist and founder of several charitable endeavors.

When Paul Newman passed away in September of 2008 at the age of 83 from lung cancer, he left a legacy that to this day is highly esteemed. Impacting Hollywood, motor racing and his beloved charity foundations, when we watch an Oscar winning Newman movie or recall his days in racing, either behind the wheel or as an IndyCar team owner, you begin to realize what Paul Newman meant to his millions of fans. (Right, I said millions.)

Newman’s love of race driving and ability behind the wheel took him to numerous wins and titles after he began racing at the age of 46. Many insiders agree that had Newman started racing when he was 20, he might have won the Indy 500. However, when most other drivers are considering retirement, here came Paul Newman starting his driving career at 46.

Newman fell in love with racing after starring in the film “Winning” in 1969, co-starring his wife, Joanne Woodward, along with Robert Wagner and Richard Thomas.

Newman started racing soon after his 1969 hit film, “Winning.” He enrolled in the Skip Barber driving school and entered his first real race at the age of 46. (Universal Pictures)

Following the film, he teamed up with Bob Sharp Racing behind the wheel of factory backed Datsuns and Nissans in SCCA and Trans Am road racing. Newman won numerous races and four Road Atlanta national titles, and also finished second at Le Mans in 1979 in Dick Barbour’s Porsche 935. In 1995, he and NASCAR star Mark Martin were part of the team that won the GTS-1 Class and finished third overall at the Rolex 24 Hour event in a Roush Ford Mustang. His final event was in 2005 in the Rolex 24 at Daytona at the age of 80.

After his driving days, Newman became a team owner with partner Carl Haas on the IndyCar circuit from 1983 to three years after his death in 2011, winning 105 races and eight yearly championships. The team fielded cars for both Mario and Michael Andretti, and both won championships and countless races. 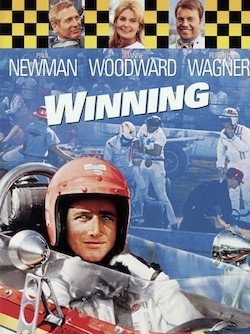 Newman started racing soon after his 1969 hit film, “Winning.” He enrolled in the Skip Barber driving school and entered his first real race at the age of 46. (Universal Pictures)

Newman’s love of racing was real as he once told People Magazine in the late 1970s that racing allowed him to “get away from all the rubbish” that Hollywood had become.

If you did speak with Newman at the races, you spoke strictly racing or his charities. If you followed these unspoken rules and never asked about Hollywood, Paul Newman was “just one of the racers” and approachable for discussion.

Of course, everyone at the track knew he was more than just one of the racers. Newman was indeed a brilliant actor who was nominated nine times for academy awards, winning best actor once for ”The Color Of Money” in 1986 and his portrayal of the pool shooting hustler, “Fast Eddie” Felson.

However, for how big a star and great racer he was, to this day he is best known for his humanitarian work, which merged so well with his motor racing involvement. In 1988, Newman founded the aforementioned special needs camp in Connecticut for children with cancer and other serious illnesses. These camps would eventually extend to other states and even Europe. Newman named the camps “The Hole in the Wall Gang Camp” after the gang in Newman’s film, Butch Cassidy and the Sundance Kid.

The 300-acre camp in Connecticut offers a year-round outreach to hospitals and clinics, and ongoing services for children, families, and caregivers. These programs serve 20,000 children and family members annually and all of the services are provided free of charge. The one-week sessions are for children aged seven to 15 diagnosed with cancer, sickle cell anemia, hemophilia and other serious illnesses.

Activities include horseback, boating, swimming, fishing, archery, crafts and more. Hole in the Wall Gang Camp is a registered charity and rebuilding after the fire is a priority, as several of the western style buildings were destroyed. Thankfully it took about 90 minutes to contain the fire and crews saved the camp’s dining hall and medical infirmary buildings. 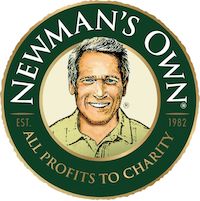 This logo appears on the many food and beverage products available under the Newman’s Own brand. One hundred percent of the profits go to charities and foundations for the needy. (Newman’s Own)

Newman’s Own, Inc. is the food and beverage company founded in 1982, and its sole owner is the Newman’s Own Foundation, also a charitable corporation. Paul Newman’s commitment is to always use 100% of the royalties and profits from all the money it receives for charitable purposes. The “Newman’s Own” results have been outstanding as from 1982 to July of 2019, more than 22,000 grants totaling over $550-million have been donated to charities.

Personally, I relish the fact that in my many years in motor sports I had the opportunity to chat with Newman and also interview his partner Carl Haas, at length for a magazine article. (Haas passed in 2016.)

“He set the bar, not only with his giving, but in how he gave. Whether it was through his own line of food products – Newman’s Own – or his work in helping create the Hole in the Wall Camps, Paul did it right, and he did it with class,” said Stewart.

Perhaps this week if my readers purchase a “Newman’s Own” food or beverage product, it will quicken getting those burned buildings back up and ready for the children scheduled to arrive at the camp in 2021. Visit www.newmansown.com to learn more.

I would think the foundation has insurance, but it will still send a message that we care about Newman’s efforts and the many children and charities he helps to this day.

Be the first to comment on "Collector Car Corner – Paul Newman: ‘Newman’s Own’ and his ‘Hole in the Wall Gang’ camps for sick children"