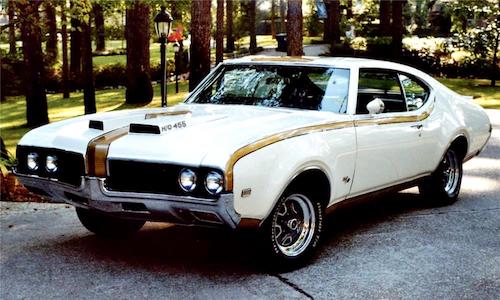 Q: Greg, I enjoyed your recent Plymouth “Gone but never forgotten” feature that appeared in our newspaper and its website. I’m wondering if you could do a similar story on the Oldsmobile, another top model that is no longer available. Did you ever own one? Why did General Motors drop the Oldsmobile? How about its impact in the racing world? How about the Hurst Olds 442? Sorry for all the questions in one letter. Thanks for considering my letter. George L., St. Augustine, Fla.

A: George, thanks for your kind words and let’s get to your questions. Ransom Olds founded the Olds Motor Vehicle Company in 1897, and during its heralded 107-year history 35.2 million cars were built.

General Motors dropped the Oldsmobile, mainly because of declining sales back in 2004. Additionally, another reason was that Olds, Pontiac and Chevy were all sharing mechanical platforms with different exterior motifs. So if you bought an Olds Alero, it was identical to the Pontiac Grand Am and Chevy Malibu. The same thing happened with Ford when it dropped its Mercury line, and also at Chrysler when the Plymouth was deleted from its core model offerings. Olds was the first model GM dropped, with Pontiac soon to follow in 2010.

The Oldsmobile history, meanwhile, is loaded with accomplishments both on the road and at the racetracks. It is also agreed that the first ever American muscle car was the 1949 Olds Rocket 88 coupe, featuring a 303-inch, first ever GM overhead valve V-8 engine that would run over 130 mph in a straight line. Although Buick used an overhead valve design in its straight-6 and straight-8 engines, it did not release its first overhead valve V8 until 1954. 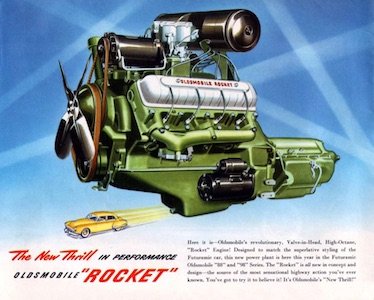 The 1949 Oldsmobile Rocket 88 is known in the performance car circles as the first muscle car thanks to its 303-inch Rocket V8, the first overhead valve V8 from General Motors. Cadillac also debuted its overhead valve V8, coming in at 331-inches but in a car too heavy to match the Olds performance. (GM)

Not only did the 1949 Olds Rocket V8 become a hit with consumers of all ages, the Rocket 88 power became legendary in both NASCAR, which organized in 1948, and early organized drag racing, as Oldsmobile’s were the cars to beat. If you check the race results from the1949, 1950 and 1951 NASCAR races, Olds was the top winner by a wide margin. Of note is Cadillac, which also released its first overhead valve V8 in 1949 at 331-inches, but the Olds was faster thanks to its lightweight attributes. Olds was also the winner of the very first Daytona 500 in 1959 with Lee Petty driving.

Over at the drags, not only did those early Olds cars run well in the stock categories, owners of the early gasser classes relied on aftermarket supercharged Oldsmobile engines prior to the Hemi taking precedence in the 1960s. In the NHRA super stock classes, the Oldsmobile was a standout performer for several decades.

The late Buddy Baker still holds the fastest average speed record when he won the Daytona 500 in his Olds Cutlass 442 in 1980. Baker averaged 177.602 mph for the 500-miles. Some say the record will never be broken as there were no yellow flags that year nor restrictor plates to slow the cars. (NASCAR)

Of note is the dominance Oldsmobile also showed in the modern-era of NASCAR as it won the 1980 Daytona 500, with Buddy Baker behind the wheel in what was then and still is the fastest 500 ever run with an average speed of 177.602. Olds also won the NASCAR Manufacturer Cup title in 1955, and twice in the Grand National Division (now Xfinity) in 1983 and 1991. Oldsmobile’s last season of NASCAR competition was 1994.

Other Olds notables include being the first GM manufacturer to offer a tri-power 3×2 barrel carburetor setup in 1957, while its Olds Cutlass intermediate was a best-selling model, overall, for several years in the ’70s. As for muscle cars, few came close to matching the popularity and performance of an Olds 442.

The original 442 appeared in 1964, the same year as the Pontiac GTO debut. The best-known Olds muscle car, however, is either a 1968 or 1969 Hurst Olds 442, both the most desirable Olds muscle cars ever built. The ’68 was finished in silver and black, while the ’69 came in white and gold. Both featured 455- inch Rocket V8 High Output engines with Ram Air induction and 500 lb. ft. of torque from 390 horses. As for nomenclature, 442 stands for “four barrel carb, four-speed transmission, and two (dual) exhausts.

Olds also receives credit in 1902 through 1907 for building the first ever auto assembly line, but it was a stationary line unlike Henry Ford, who built the first moving assembly line in 1913. General Motors purchased Oldsmobile in 1908, and along with its first brand Buick, began sharing parts between the two for ease of assembly and to keep costs in line.

Personally, it was the 1950s and 1960s when I became fully aware of Oldsmobile, and the many model names intrigues me even to this day. I loved the first true hardtop Holiday 88 in 1950, then the soon to follow Dynamic and Super 88s. When GM finally retired the 88 line in 1991 after 50 years, it was second only to the Chrysler New Yorker in name brand recognition. 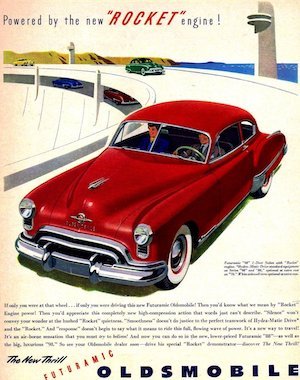 Along the way and as the years went on I also remember the station wagon Vista Cruiser, Starfire coupes and convertibles, Delta 88, Jetfire, Custom Cruiser, Omega, Calais, Ciera, Achieva, Bravada, Aurora, Silhouette, and Intrigue. As for top luxury, the 98 series filled all the needs of those who wanted opulence in a more discreet manner.

Olds also was the first to offer a fully automatic transmission in 1940 called the Hydra-Matic; the front drive “Motor Trend Car Of The Year” Olds Tornado in 1966; its F-85 with an all aluminum 215-inch V-8 from 1961 to 1963; and aforementioned Olds Vista Cruiser wagons with unique skylights.

Today there are still lots of Oldsmobiles at car shows and drag races, so fans are able to enjoy the cars up close and personal. Unfortunately, I’ve never personally owned an Olds but I still hope that someday I’ll own a 1969 white and gold Hurst Olds 442.

Thanks for your question.

1 Comment on "Collector Car Corner – Oldsmobile: Roar of the Rocket s and the fabulous Hurst Olds 442"