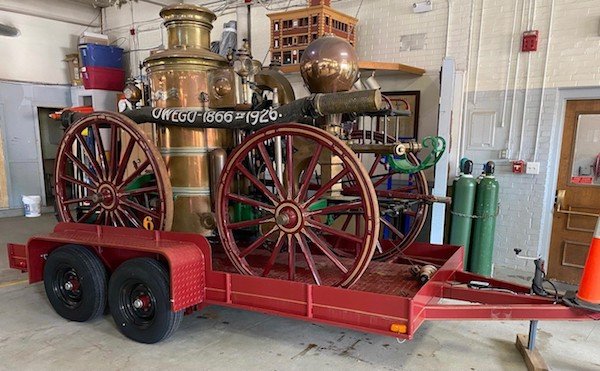 Owego Hose Team members transported the Owego Fire Department’s 1866 Amoskeag Steam Fire Engine – known as the “steamer” and often referred to as the “pride of the department” – to Firefly Restorations in Hope, Maine last week.

The 153-year-old steamer has not been operational since the late 1980s, at which time it was the oldest operating licensed steam fire engine in the United States. Now under the care, custody and control of the Owego Hose Teams, the steamer will undergo a complete restoration, allowing it to reclaim the “oldest operating” title.

The Hose Team has divided the overall steamer project into three phases. 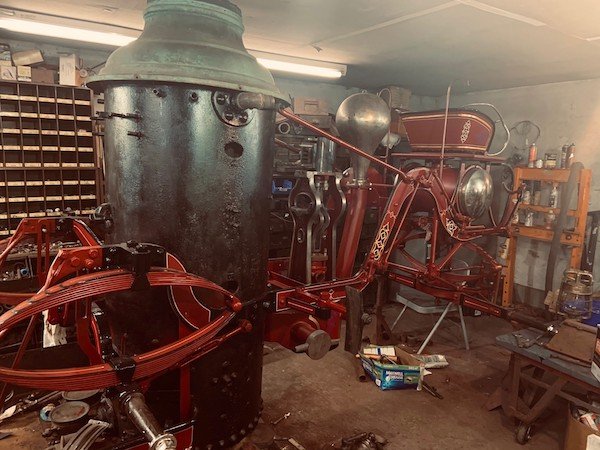 Phase I involves the steamer’s restoration making it operational again, and repair of the steamer’s 1984 trailer. Global Industrial Services recently donated parts and labor for the trailer repair that included new brakes, wiring and lights, allowing the steamer to be transported.

While at Firefly Restorations, the steamer work includes fire tube boiler replacement (old boiler will be retained for display purposes); engine, pump and other work as required; construction of accurate reproduction of steamer tiller (tongue) with “S” curve so the steamer may be hand pulled; repair of lamps and mounts; manufacture and attachment of “ash” pan with draft control and clean out provisions preventing the steamer wheels from catching fire; replacement of hard suction hoses; painting and gold leaf lettering decorations reflective of the 1866 time period; rebuilding and certification water and steam pressure gauges to include new mounts; and right front wheel repair. The overall cost of Phase I is estimated at $50,000.

Phase II of the project involves the construction of a “Steamer House” that will house the steamer for display purposes, along with the Owego Fire Department’s 1939 Sanford Hose Truck.  Modeled after a steamer house located in Marathon, N.Y., it will be constructed of cedar wood frame and glass solarium walls for 360 degree viewing with steeple supporting an antique fire bell.

Plans call for the building to be located next to Owego Fire Station #2 at the old Lloyd’s Barbershop site on North Avenue, but the Village of Owego Board continues to delay final approval of the project providing no explanation for the hold up, according to Hose Team Member Patrick Gavin.

Gavin explained that Hose Team members have attended ten months’ worth of Village board meetings offering several benefits for the project such as bolstering the North Avenue corridor in the Village, and improving an abandoned property while bringing foot traffic and tourists to the business district; supporting the Village’s commitment to historic preservation and maintaining the downtown charm and character that appeals to residents and visitors; enhancing the Village’s gateway to historic downtown Owego; complimenting Downtown Revitalization Initiatives (DRI) efforts underway in the Village, and all the while costing the Village of Owego taxpayers nothing in restoration, construction, and maintenance costs as the Hose Team is raising funds for the project privately. 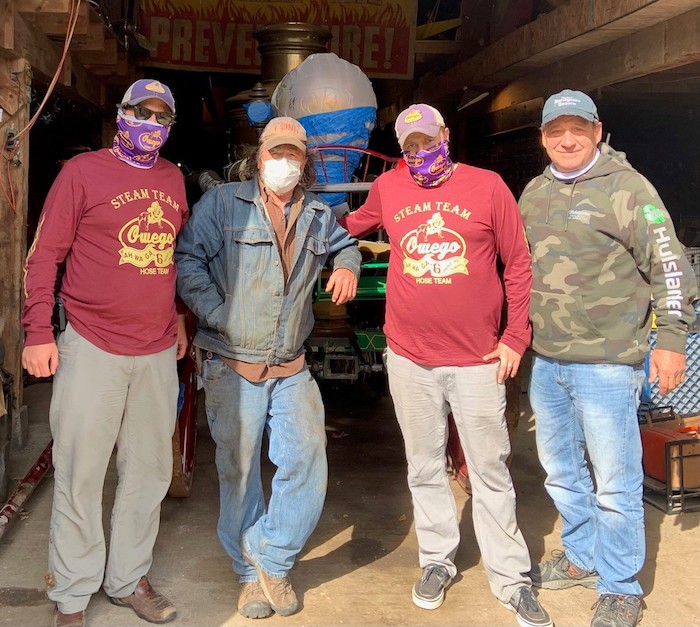 Despite the Village’s ongoing delay, hose team members continue to improve the site and already removed the abandoned barbershop building. The overgrown trees on the property soon will be removed, allowing for additional site work.  The wood from the trees will be used as fuel for the steamer. The anticipated cost of Phase II of the steamer project is estimated at $50,000.

Phase III of the overall steamer project calls for the training of Hose Team members on steam fire engine operations and a partnership with the Owego Apalachin Central School District.

The hose team has contracted with the Fire Museum of Maryland and curator Steve Heaver to provide steam training for its members. Hose Team Captain Patrick Gavin recently participated in hydrostatic testing of one of the museum’s steamers, kicking off the partnership that will continue in the coming months.

Additional steam training is planned with the Rough and Tumble Engineers Association of Kinzer, Pa.

Phase III also works with Owego Free Academy (OFA) to incorporate the steamer and steam powered technology into its curriculum founding a “steam team” comprised of high school students interested in learning its history, operation, and relevance today.  This blend of history and traditions with progress falls in line with the overall OFA Science, Technology, Engineering, Agriculture & Arts, and Mathematics (STEAM) model.

According to Gavin, students will get invaluable experience and exposure they would otherwise not have as a direct result of the steamer restoration and “steam team.” 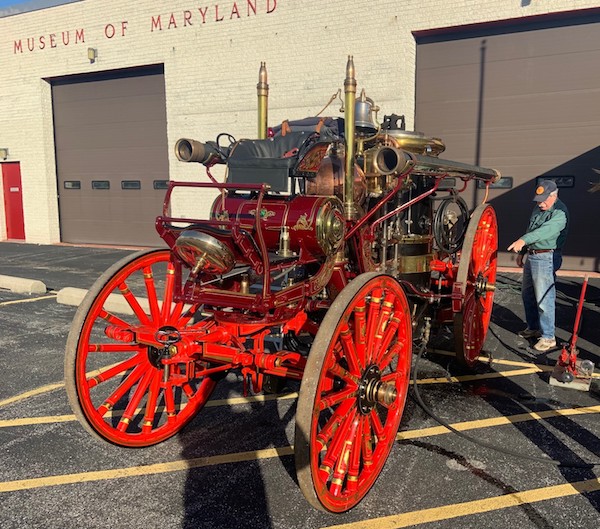 The steamer house will also provide a unique setting and backdrop for the fire department’s existing elementary school fire prevention program.  This program is designed to prevent injury, illness, and other unsafe situations for children as part of the department’s mission of saving lives.

The total project cost of the steamer restoration and “steamer house” is expected to be in upwards of $100,000. Significant financial support has already been received from the Mildred Faulkner Truman Foundation and the Fannie C. Hyde Charitable Trust.

Limited fundraising, due to the pandemic, is underway and includes ongoing chicken BBQs. An account at Neighborhood Redemption Center on 5th Avenue in Owego has also been set up to aid the project. Individuals can return their bottles and cans at the redemption center and apply their return funds to the Owego Hose Team account there.

Individuals can also contribute to the project by participating in the hose team’s “Steam Booster” donor program.  For a $100 tax-deductible contribution, name(s) will be placed on a cast iron bronze plaque that will proudly hang on the steamer house building.  Donors will receive a letter and certificate thanking them for their donation.  Donors can also purchase benches that will surround the steamer house.

Information on the “Steam Booster” and bench program is available at the hose team’s website, www.OwegoHoseTeams.com.

2 Comments on "Pride of OFD Heads to Maine for Repair"