Frieda Rudin Baker, a lifelong resident of Owego, N.Y., received a special honor on Sept. 9. A car parade to celebrate her 100th birthday traveled along North Avenue and right past the home she has lived in for 80 years. Signs placed along the roadway encouraged passing motorists to “Honk for Frieda.” 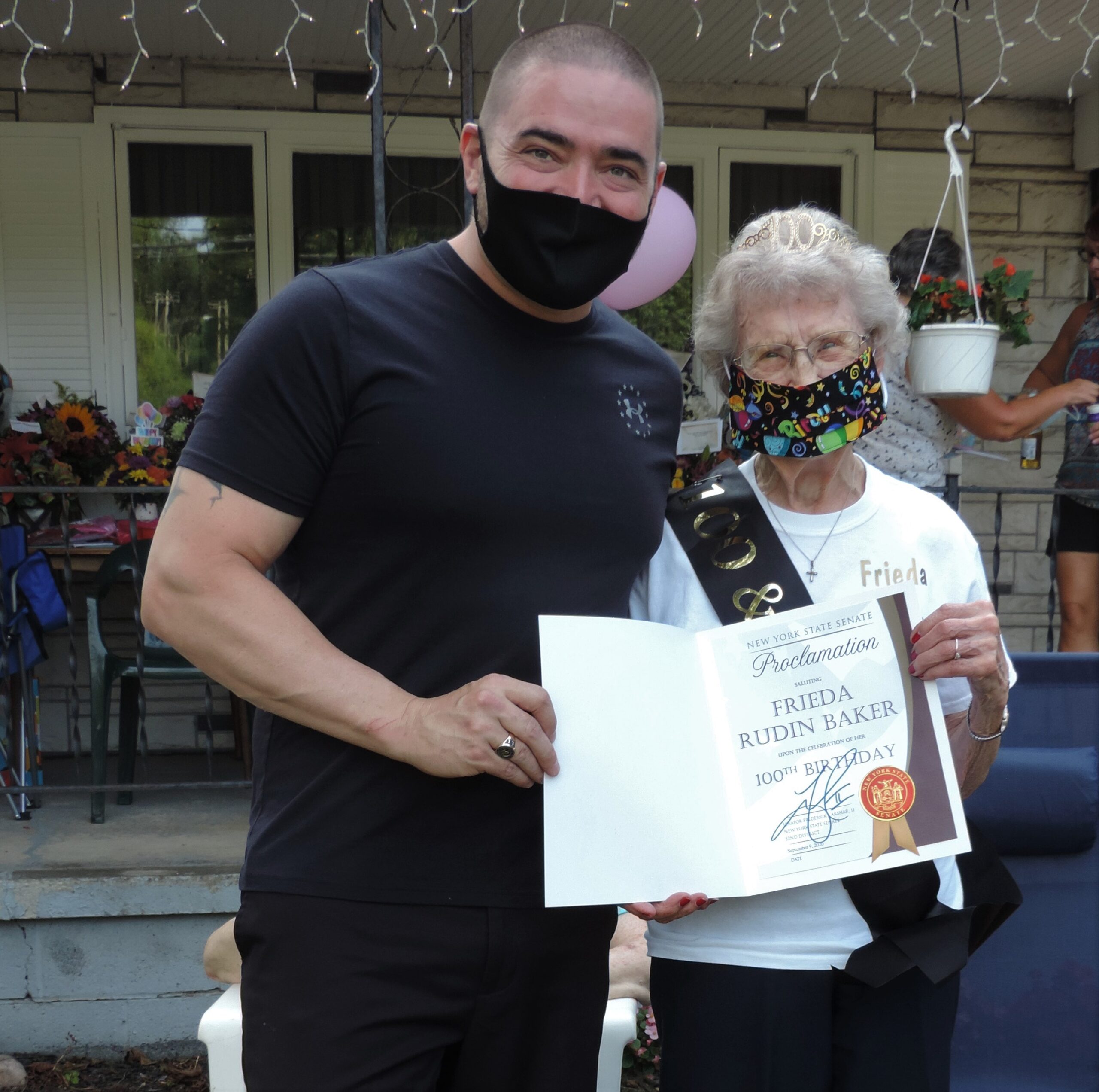 Frieda was in the spotlight last year, too. She participated at the Baker Fireman’s Fountain re-dedication ceremony where she assisted in turning on the water to the iconic landmark for the first time since its restoration.

Frieda, one of ten children, was born on the Rudin family farm located on Gaskill Road, and spoke fondly of the popular community event, Rudin’s Olde Tyme Farm Days. 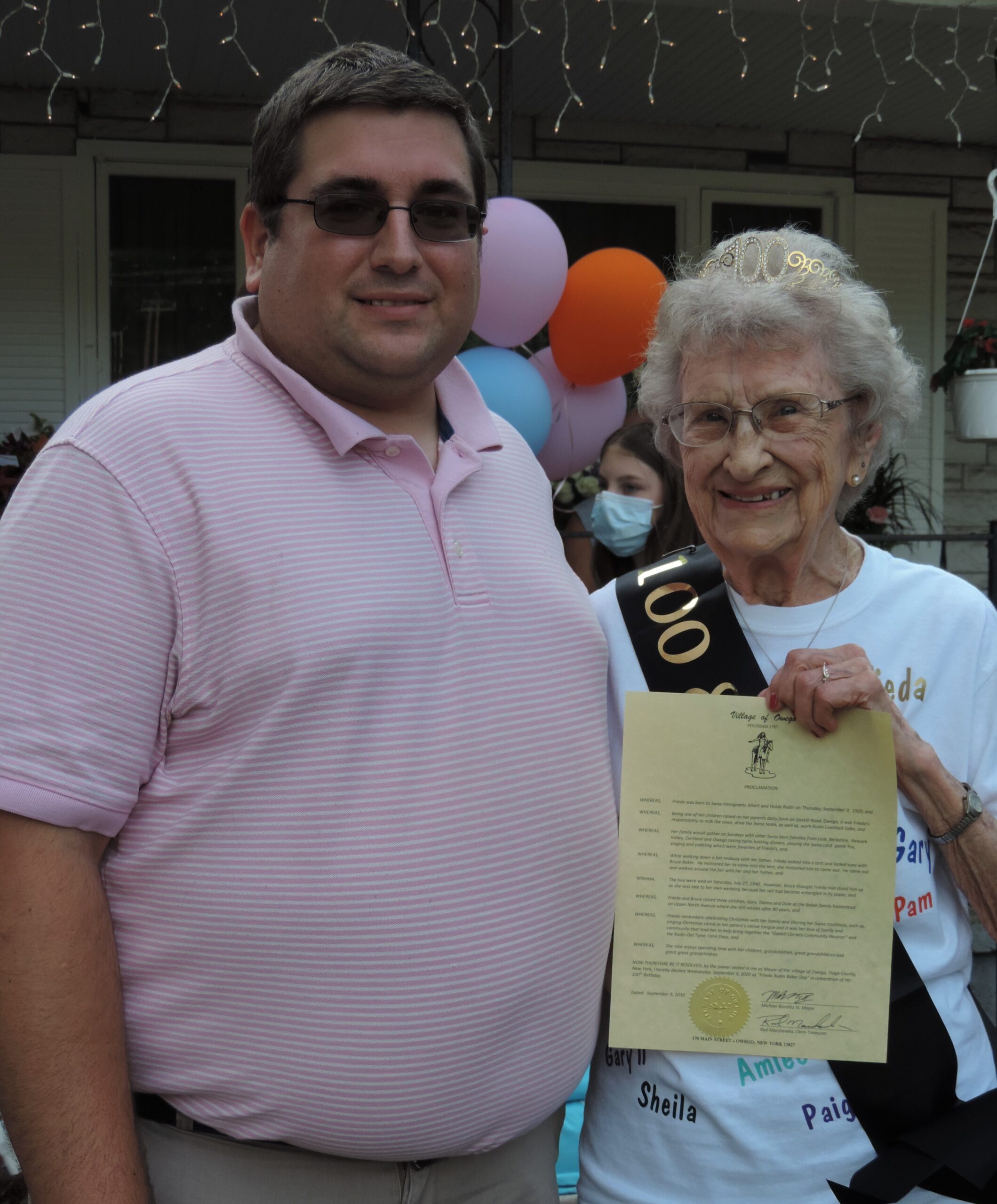 The Rudin’s came to the U.S. from Arboldswil, Switzerland, located north of the capital, Bern. Frieda said she enjoyed a visit to Switzerland in 1971.

Frieda’s father, Albert Sr., arrived here first in 1911, followed by her mother, Hulda, in 1913. They made Iowa their first home.

The Rudin’s, in a quest to pursue potato farming in Maine, gathered four children under four, and along with a team of horses and cows boarded a train east. It was while at a rest stop at the Apalachin station when a man approached the family and talked up farming in Tioga County. After checking out farmland here, the Rudin’s chose instead to plant their roots on Gaskill Road.

Frieda, the first born on the new dairy farm, said, “They never did grow potatoes.” 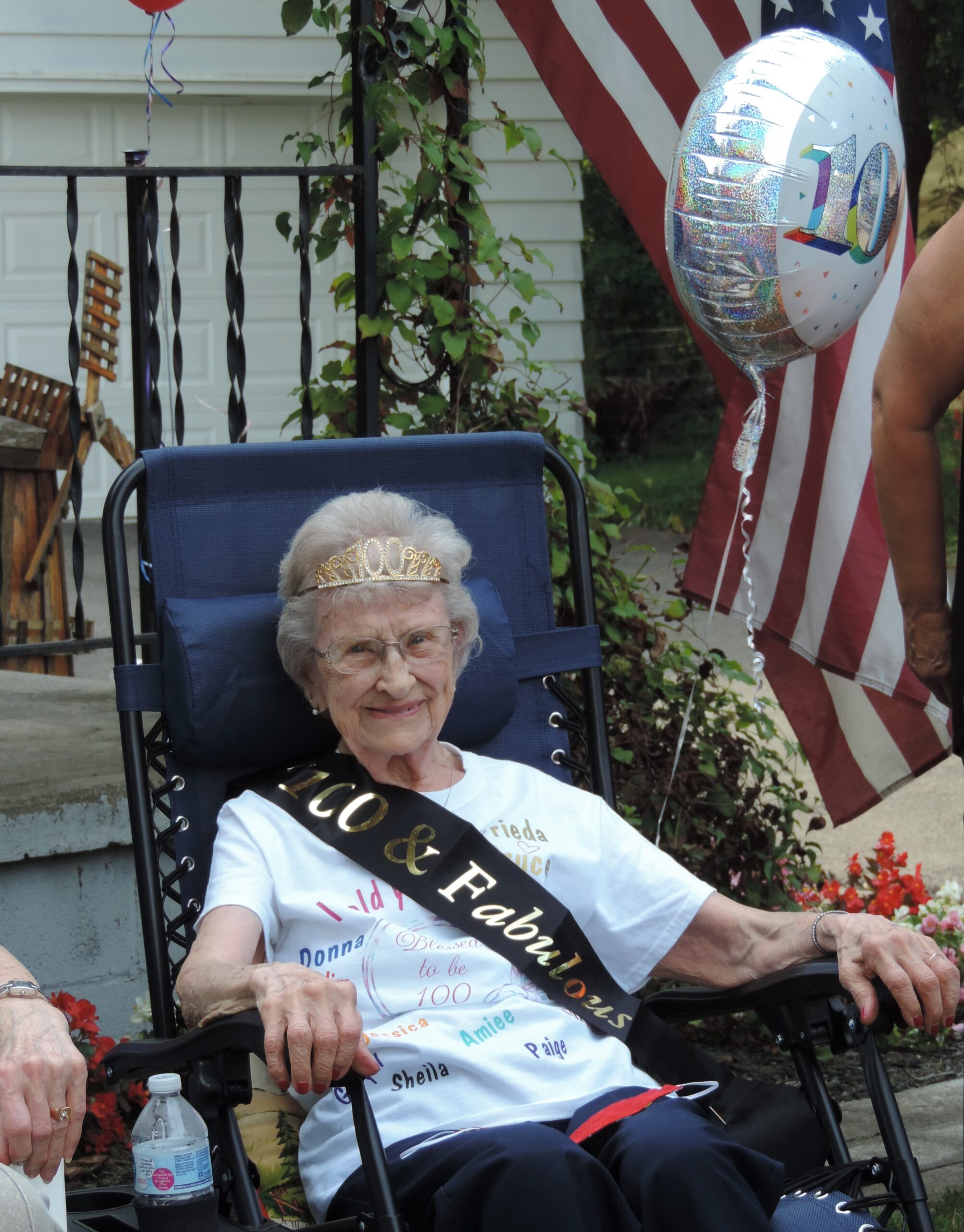 “100 and Fabulous,” Frieda Rudin Baker was joined on her 100th birthday by family and friends. (Photo by JoAnn R. Walter)

Frieda does not recall any stories about the 1918 pandemic, however she commented that scarlet fever ran through the family. Frieda said her father slept at a neighbor’s house so he could stay healthy while tending the farm, and then her mother cared for the sick children.

Frieda worked for 50 years at the Rudin’s auction barn. She recalls attending a country school near her home for the primary years, and then left high school at age 16 to help at the farm. She said she had milked cows by hand since age eight.

When asked what her secret to longevity is, Frieda said, “Always working hard on the farm.”

The wedding story of Frieda and her husband, Bruce, left him wondering if he was “stood up” at the church. As she headed out the door on a hot July day, then 20-year-old Frieda’s veil became entangled on flypaper. Following a quick cleaning, Frieda arrived at the church as the organist played round three of the wedding march. After the “I Do’s,” the Baker’s ended up “sticking together” for 67 years before Bruce passed away in 2007.

Today, Frieda still works hard. She tends to her flower garden, pulls weeds, does her own laundry, runs the vacuum and likes to sweep outside.

An admirer of Frieda Rudin Baker participates in a car procession for a 100th birthday celebration held on Sept. 9. (Photo by JoAnn R. Walter)

Her family remembers the beautiful prom and wedding dresses she made by hand, as well as her baking. Frieda used to ship homemade cookies to her family living out-of-state, and often greeted grandchildren at her house after school to serve cookies.

Frieda’s family spans in age from less than one year to 100 years; another great-great grandchild is due in December. Frieda has three children, and enjoys spending time with her three generations of grandchildren.

During an interview in August, Frieda remarked about the planned parade, “I’ve never turned 100 before, so I’ve never had anything like this.”

A message on the windshield of one car in the procession noted, “You did it! 100!”