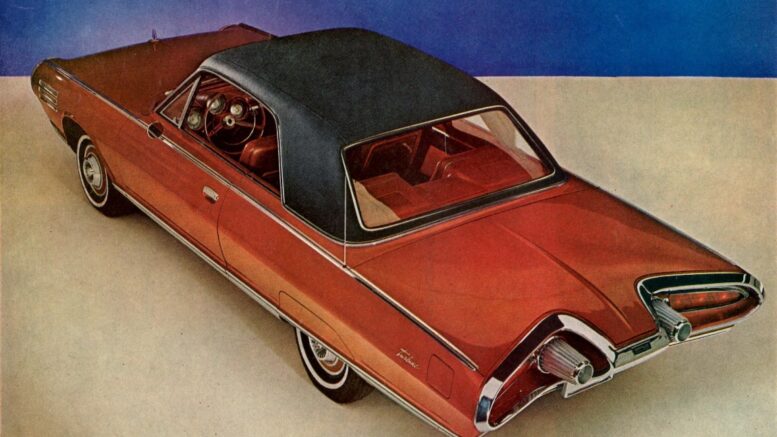 Q: Hello Greg! Decades ago, I’m thinking the summer of 1964, my friend and I both had dads that worked for Chrysler Corp. in Detroit. One night her dad brought home a prototype car and gave my dad and me a ride. All I remember is that it was a special car and when he started it and we drove around, it sounded like a vacuum cleaner with a “humming” sound. Any idea on the history behind this unknown car? Whenever I read your column this car always crosses my mind.

And by the way, my first car purchased after I received my first teaching contract after graduation was that memorable 1970 Dodge Challenger that you recently wrote about in your “Cars We Remember” articles. The Challenger I ordered was blue with a white vinyl top and white interior. It was pretty sweet. I might not have done much dragging down Woodward Avenue, but it was a great car.

Thanks for listening to me reminisce and I hope I can get an answer about the car that sounded like a vacuum cleaner.

I read your column every Sunday in the Adrian Daily Telegram here in Lenawee County. Again, thanks for your wonderful columns. Kathy Schiermyer, Morenci, Michigan.

A: Kathy thanks for an interesting letter and your very kind words. You are one lucky person as your dad and your friend’s dad sure did have the “proper connections” to bring home some impressive Chrysler cars back then for a test drive.

And, most important, the car you speak of was a high priority prototype car that utilized a special turbine engine that did have that “whoosh” sound that you recall as a vacuum cleaner. 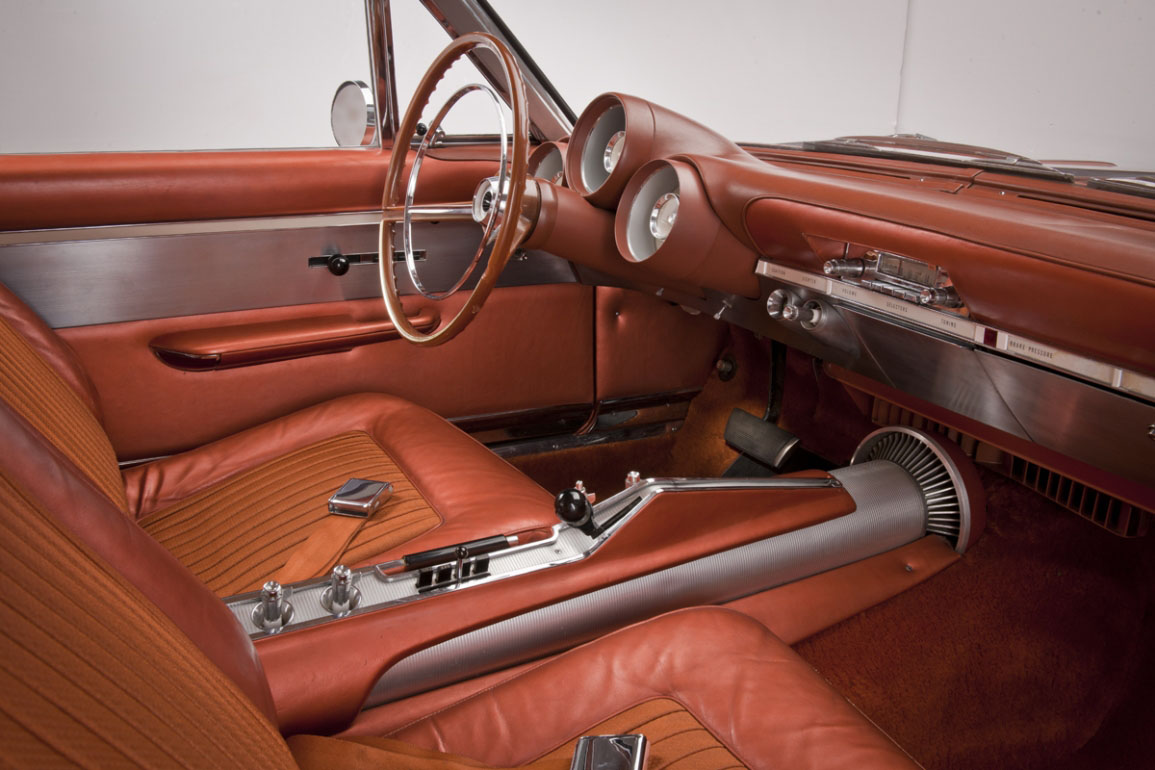 The interior of the Turbine Car featured many interesting items and special turbine style additions. All of the 50 prototypes were finished in a special bronze color with black vinyl tops.

Called the Chrysler Turbine Ghia, Chrysler produced 50 of these turbine vehicles in 1963-1964 and, surprisingly, they were used for the general public for a test drive evaluation, free of charge, for three months.

In my lifetime, I saw this car in person twice, once at the Henry Ford Museum and also back in 1964 at the New York World’s Fair. To help explain about the car, I located an official Chrysler press release.

NEW STYLING FOR NEW POWER is embodied in the limited production Chrysler Corporation Turbine Car. Fifty of these cars are scheduled to be produced in the current phase of the Chrysler turbine program. Chrysler will distribute, beginning this fall, to select users under a no-charge use agreement as part of Chrysler Corporation’s consumer research program.

Smooth, sculptured lines of the new turbine car give it a contemporary personality all its own. Overall length of the Chrysler Corporation Turbine Car is 201.6 inches. It has a 110-inch wheelbase. The latest Chrysler Corporation turbine engine delivers 130 horsepower, equivalent in overall car performance to a V-8 piston engine of more than 200 horsepower, according to Chrysler turbine engineers.

The car was styled and engineered by Chrysler Corporation and handcrafted by Ghia of Italy. Powered by the company’s new twin-regenerator turbine engine, these turbine cars will be placed with selected users from all 48 states beginning this fall under a no-charge use agreement. Approximately 200 motorists will participate in the unprecedented consumer evaluation program with each motorist using the car for periods up to three months. (End press release)

Looking back, no other manufacturer in memory ever produced 50 vehicles to be used as test mules utilizing actual everyday drivers to evaluate the car. How cool a family must have been having a 1963 Chrysler Turbine parked in their driveway.

Chrysler Corporation’s Turbine Car came about thanks to George J. Huebner, who was in charge of a passenger-car testing program and Chrysler’s turbine engines, which were first developed during WWII for tanks. Huebner utilized Plymouths in the early turbine tests and in 1956, a turbine powered Plymouth went from New York to Los Angeles as the first ever-transcontinental land-based turbine road trip with not one problem. 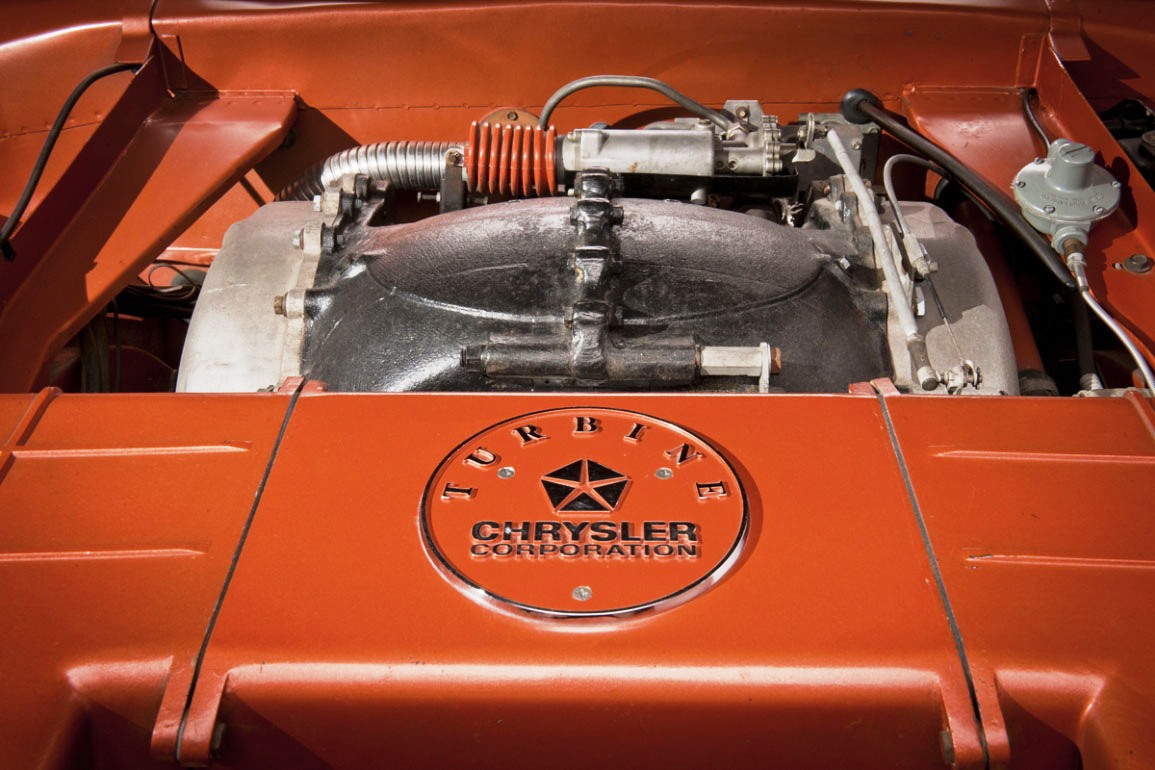 George J. Huebner receives credit for the turbine engine development program, which started in 1953 and lasted well into the 1970s. Chrysler used jet like turbine engines to run via gearing and transmissions instead of thrust. Due to expensive prices and upcoming EPA clean air mandates, the program was halted although the Chrysler Turbine is respected today as one of the most important and impressive prototypes ever.

The 1963-64 was specially designed with a twin-regenerator turbine engine that weighed just 410 pounds. Elwood Engel, formerly of Ford Thunderbird division, designed the car and Ghia of Italy handled the hand-built assembly of actually 55 four-passenger prototypes but used just 50 for the testing. Back then it was equivalent in performance to Chrysler’s 318-V8 piston engine, although the turbine did not have any pistons and one-fifth the parts of the V8. It also only had but one spark plug, and as for fuel it ran well on diesel, kerosene, unleaded gasoline, jet aircraft fuel and even vegetable oil. Fuel mileage was 19 highway, but only eight or so in the city.

I personally remember the rear dual “afterburner” design, and all 50 prototypes were finished in a special “Turbine Bronze” color. The cabin was also copper-colored with four leather bucket seats and a novel full-length console in the sporty styled copper tone cabin.

In ending, only nine of the original 50 Chrysler Turbines remain, and Jay Leno is the proud owner of one of them. With a red line of 60,000 RPMs and an idle at 22,000, the engine ran fine and could be geared to run as a family sedan with its Torqueflite transmission or a winning racecar with no transmission. (See Jay Leno’s Garage feature on YouTube.)

At this point everyone’s wondering why Chrysler never put the turbine into production. The public driving test was a huge success, overall, logging over 1-million carefree miles. Fuel mileage back in 1964 didn’t matter, as fuel was in the 25-cent a gallon range. 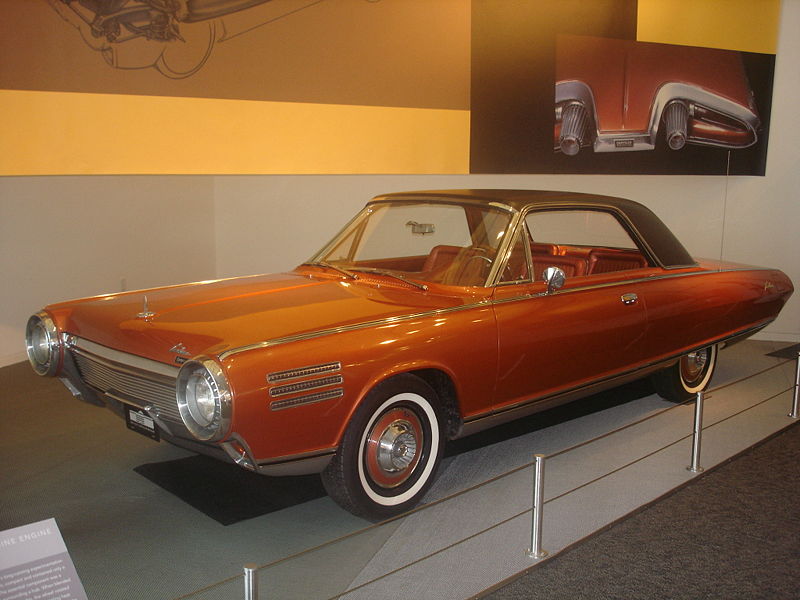 After an exterior design from the desk of Elwood Engel, formerly of the Ford Thunderbird division, the car was hand built by Ghia motorcoach builders in Italy. Ghia is known for top quality craftsmanship.

Chrysler’s answer was it just didn’t make economic sense for a full production platform and it would have taken billions to make it happen. Planned was a Dodge Charger Turbine in 1966-1967, but the idea was quickly scrapped. Sadly, all but nine of the original turbines were intentionally destroyed due to a weird “return to country of origin” import rule as many museums were offered a turbine but just a few accepted.

Others played with turbines, especially in motorsports. STP car owner Andy Granatelli nearly won the Indianapolis 500 two times with turbine engines, only to see his drivers break down while leading with the finish in sight in both 1967 (3-laps to go) and 1968 (10 laps to go) with non-turbine part failures. USAC then outlawed the engine in 1969.

Kathy, we covered a lot of ground in this column, and there’s much more to be written about turbine powered vehicles as there are still companies out there experimenting, especially with trucks. Thanks for bringing back some great memories of the fabulous Chrysler turbine cars.

(Greg Zyla is a syndicated auto writer who welcomes questions and comments on old cars, auto nostalgia and motorsports at greg@gregzyla.com or 303 Roosevelt St., Sayre, Pa. 18840.)