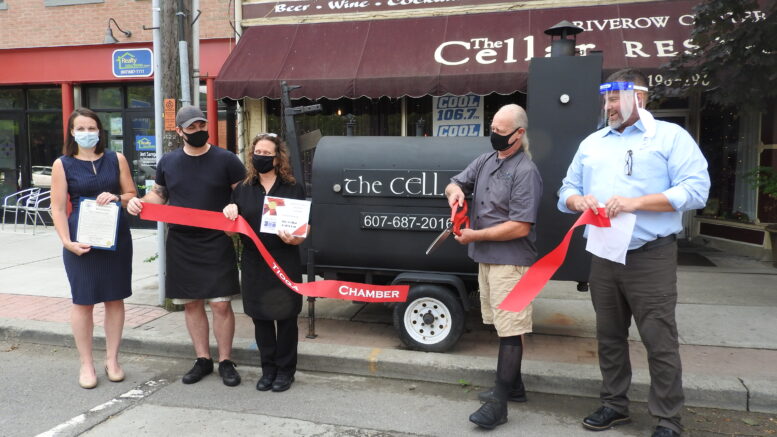 With area restaurants struggling through the pandemic, most of them are weathering the storm. The Cellar Restaurant, nestled along the Susquehanna River on Front Street, in Owego, N.Y., has seen its share of storms.

Operated by Sandy Layman and her husband Bob, the restaurant has been re-created from the ground up, specifically following the flooding in 2011. The Cellar, as most know, used to be in the cellar of the building; subsequently moving up when the floodwaters rose.

Now the Layman’s are dealing with the pandemic and have had to get creative and reinvent the way they operate. On Thursday, The Cellar launched the official opening of their Deli & Bar menu – all created with Bob Layman’s smoked meats, and boasting the same fresh ingredients that make The Cellar such a popular eatery. 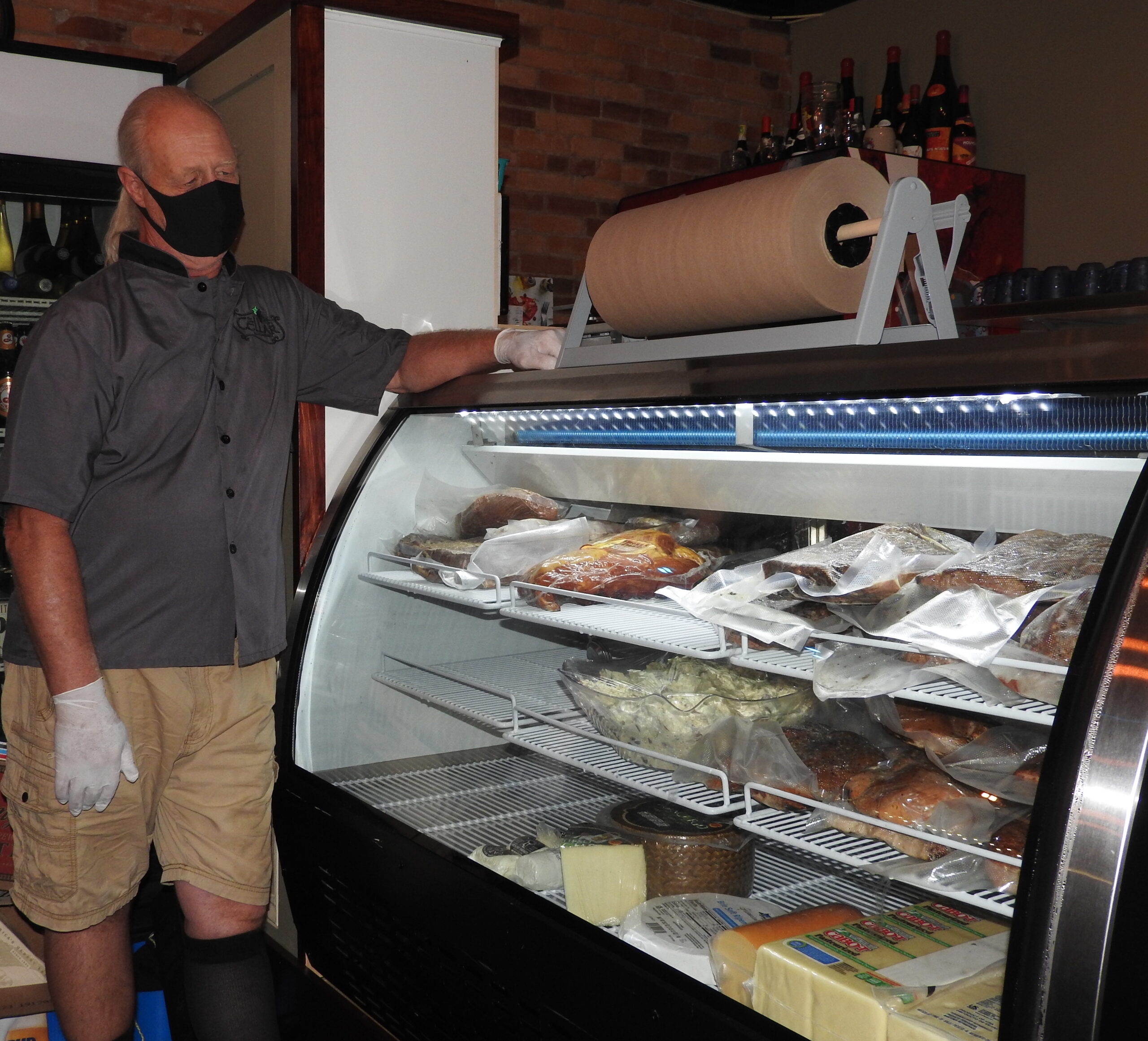 Bob Layman is pictured next to his smoked meats at The Cellar Restaurant. (Photo by Wendy Post)

They also held their grand re-opening on Thursday, a celebration that had to be put off because of the pandemic.

“We did a soft opening,” said Sandy Layman, “but now we’re doing it all.”

The Tioga County Chamber of Commerce was on hand for the grand re-opening, as well as a representative from Congressman Reed’s office along with other local officials.

Special to the new lunchtime menu are items that were previously served at River Rose Café in the former Hand of Man, a business once located on the edge of River Row near the bridge in Owego, and formerly owned by Pat Hansen.

Now, guests that want to enjoy The Cellar’s Deli & Bar menu can select from a variety of sandwiches that include Popeye Turkey, a Cellar classic; The McMaster; The Pumpelly, another former River Rose Café favorite; or even Sa Sa Na Loft. 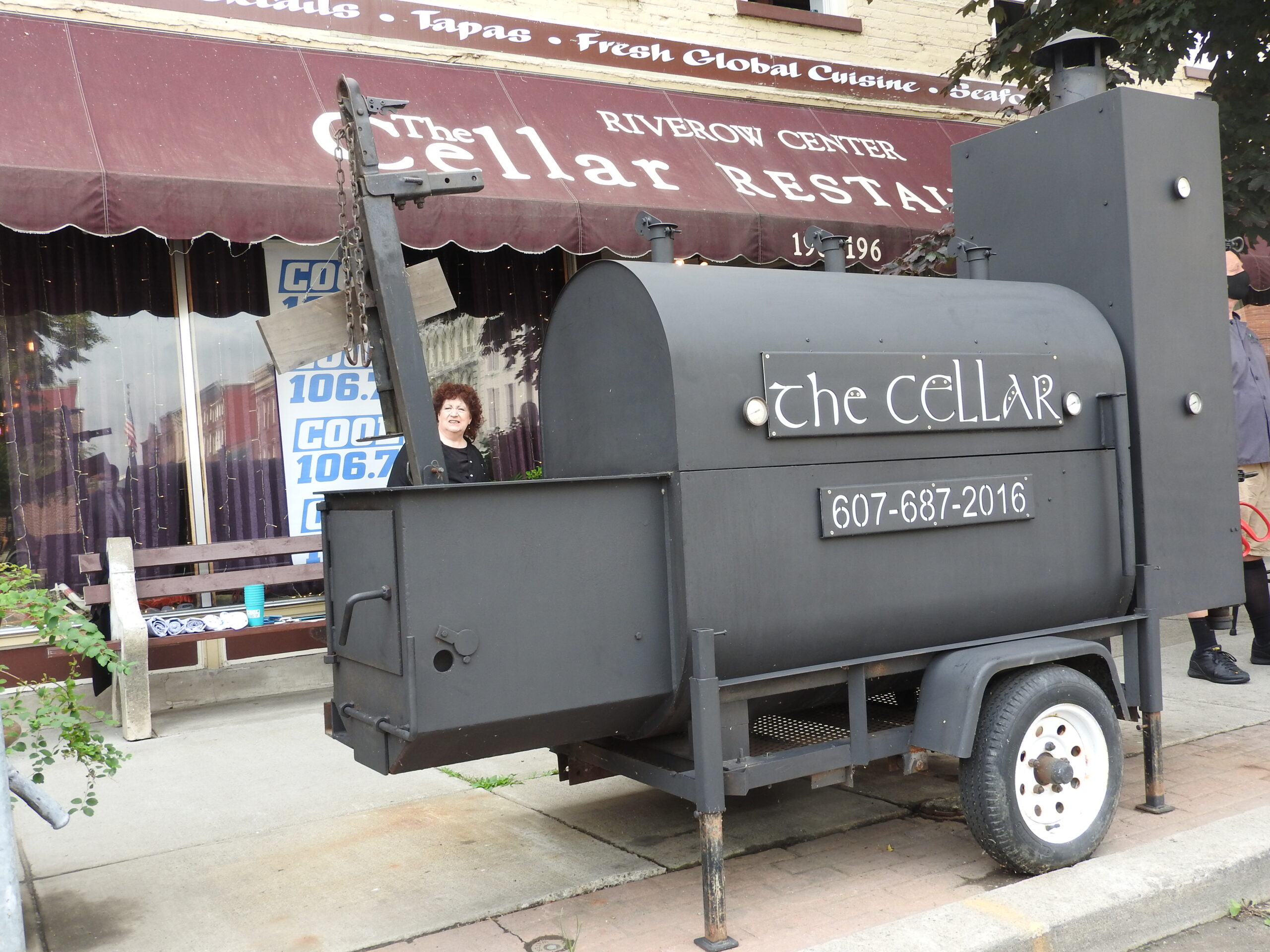 Pictured is The Cellar’s smoker, which can be seen along Front Street and in front of the popular eatery. (Photo by Wendy Post)

According to Sandy Layman, they talked to Pat Hansen and then Becky, the cook from River Rose, came and taught them how to make some of the items from the menu they used for many years.

“Now we’re mixing up our own menu with some River Rose Café items,” said Layman.

To learn more, view their new menu or for directions, you can visit The Cellar Restaurant online at the cellarrestaurant.net. You can also Follow them on Facebook.