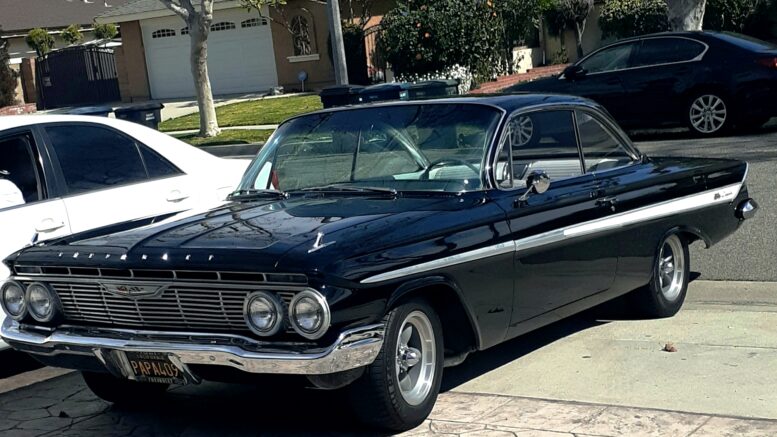 Fernando Soto owns this beautiful 1961 Impala SS with a 1962 409 under the hood. The SS option was available on all Impala models back then for just $58.80 more. (Fernando Soto photo)

Q: Hello Greg and I enjoy your columns on the muscle and collector cars. I have a 1961 Impala Super Sport that I just purchased from my brother. It’s been in the family for 20 years.

It has a 1962 409 engine with 409 horsepower dual-quads and it’s a 4-speed car. I’m not complaining, just would like any information you can give me, and your memories of these cars. I very much appreciate it.

I have attached a few photos. Thank you sir, Fernando Soto, email from Cerritos, Calif. 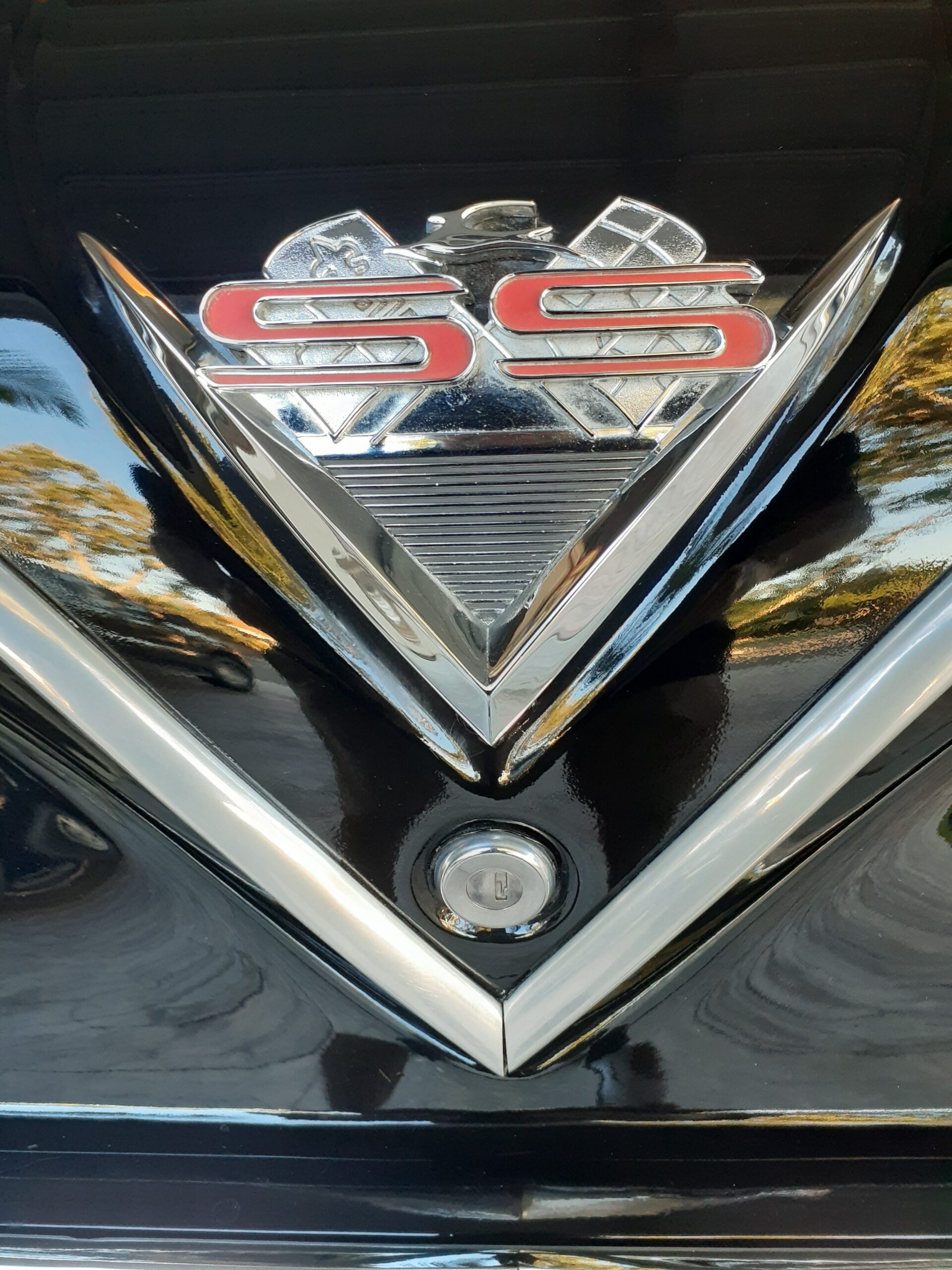 This rear trunk photo highlights the special crossed flag SS badge that indicates either a 348 or a 409 V8 engine under the hood. (Fernando Soto photo)

A: Fernando, let’s get right to your outstanding 1961 Chevrolet Impala SS that just happens to be a car from that era that brings back many fond memories.

Turns out there was a Chevy dealer where I lived in south Jersey called Yank Chevrolet. I literally would spend hours in that showroom and looking around the lot in 1961 to 1963 awaiting delivery of any and all 409 Chevrolets, be it Biscayne, BelAir or Impala.

This rear trunk photo highlights the special crossed flag SS badge that indicates either a 348 or a 409 V8 engine under the hood. (Fernando Soto photo)

My dad was an advertising salesman for our local newspaper, The Vineland Times Journal, and lucky for me my dad bought his first ever brand new car from Yank, a 1961 BelAir two-door with the inline-6. Thanks to my dad’s purchase it sure helped my many hours of hanging around Yank Chevrolet and making friends with all the salespeople. I was only 12 years old then and the dealership was within walking distance.

As for that first ever 1961 Impala SS 409 released mid-year, it sat in front of me at the last red-light of our main avenue finished in a beautiful red on red with whitewall tires and the hubcaps still in the trunk. When the light turned green, whoever was driving gave it a good run full throttle up to maybe 60-MPH, shifting as best he could but not trying a “speed shift,” because if you missed a gear it could end in some damage. 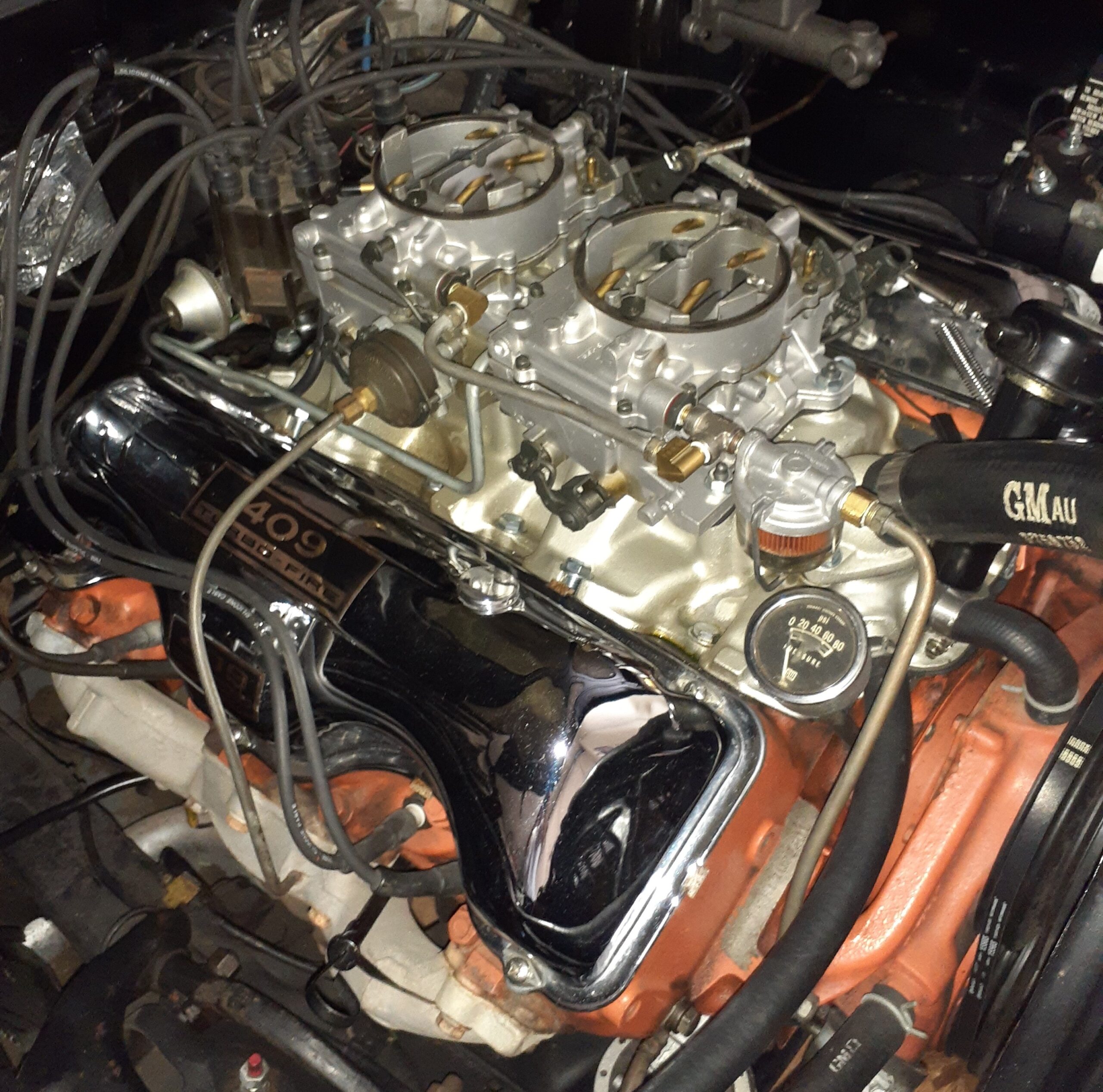 This initial 1961 409 was a 360-horsepower model with a single 4-barrel carburetor. However, what you have in your possession is what I’ll call the 1961 “Dyno Don” Nicholson Optional / Super Stock special, which the late, great Nicholson used to becoming the first ever Super Stock and Optional Super Stock class “match race” driver to do a national tour.

Others with Gassers and Dragsters would tour back then, but never someone driving a car you could buy at your local Chevy dealer. For Chevy purists, and from my sometimes-shaky memory, Chevy sent Nicholson and fellow west coast racer Frank Sanders each a “special” 409. It was a dual-quad equipped, two-piece hi-rise aluminum manifold 409 prior to the 1961 NHRA Winternationals in February, which Nicholson won. All the other 409s that year were single 4-barrel units.

Dyno Don Nicholson was the first national Super Stock class touring drag racer in what was basically a Chevrolet Impala that could be purchased at your Chevy dealer. Match racing with these early muscle cars became big business and packed in fans at the area drag strips. Nicholson is shown in a race against a 1961 Pontiac. (Compliments NHRA)

Soon after winning the ’61 Winternationals at Pomona, Nicholson received calls from eastern drag strip promoters (Bill Nocco from Vineland Speedway was one of them) offering him $600 to compete in match races. I was privileged to see the Nocco arranged match race between Nicholson, and his ’61 Impala 409 dual quad, against a ’61 Pontiac with a Super Duty 421 campaigned by Delaware’s Harold Ramsey in his Union Park Pontiac. After the event, we were allowed to go into the pits and I saw Nicholson’s 409 and it was indeed the two four-barrel version, clearly a special match race entry that defeated Ramsey in a best of five match race.

By 1962, Nicholson and countless drag racers from all manufacturers became famous and made good livings running match races in front of filled grandstands. I’ve always felt this was the actual beginning of the muscle car frenzy that grew each year and lasted until 1973 when smog motors and government mandates and low octane gasoline took over.

For just $53.80 more any Impala, including the 4-doors, became an SS. Included with the Super Sport trim were special badges, power brakes, SS wheel covers and special, narrower whitewall tires. 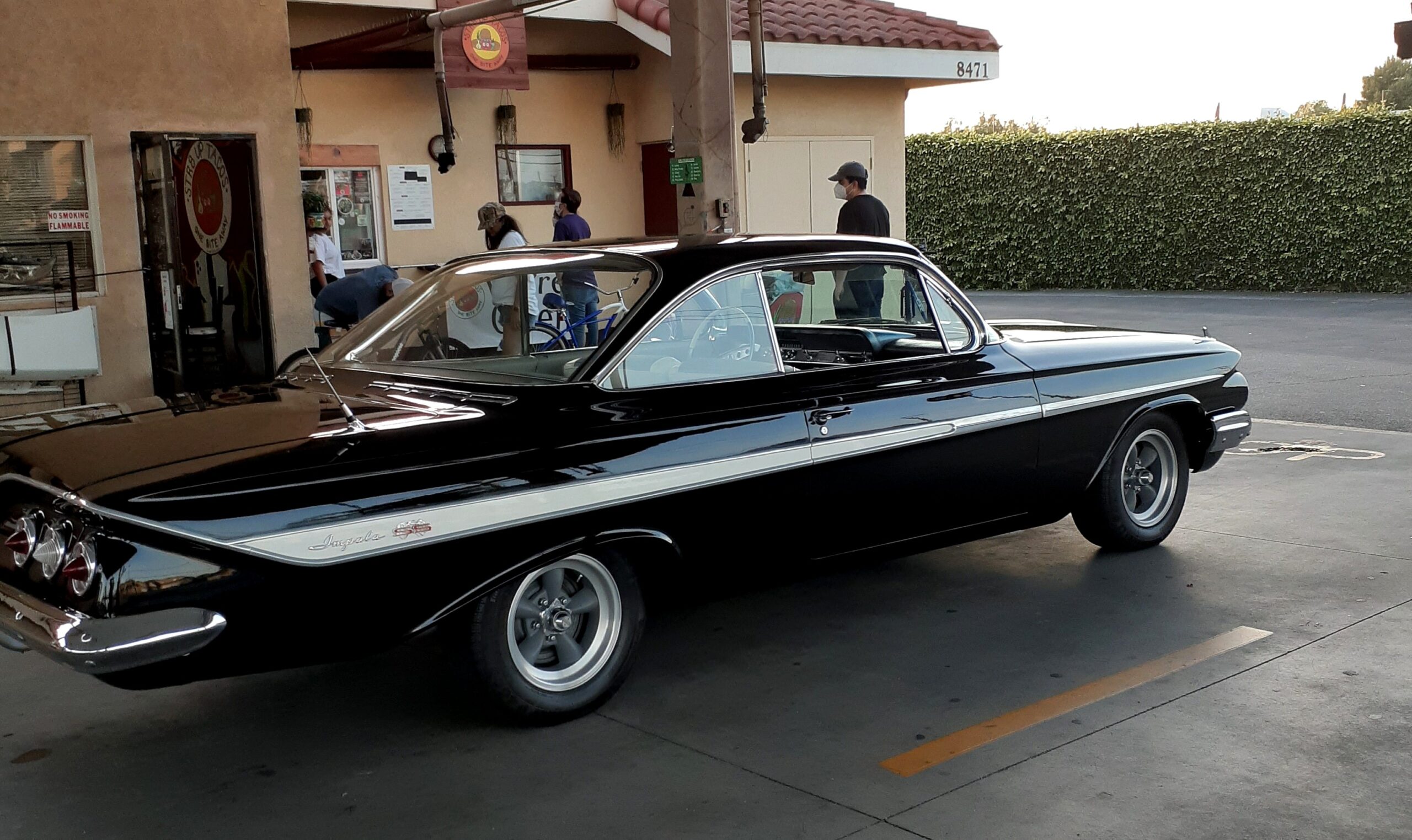 Chevy’s biggest V8 engines received special SS option treatment including chassis improvements, special shocks, and those special SS crossed flag badges, a sure tip it was either a 348 or a 409.

After seeing these cars at the drag strips the next thing you know “She’s real fine, my 409″ by the Beach Boys is playing every 30-minutes on the radio. The rest is history.

Thanks so much for your letter and photos. You have an outstanding 409 on your hands.

(Greg Zyla is a syndicated columnist who welcomes reader question and comments on collector cars, auto nostalgia and motorsports at 303 Roosevelt St., Sayre, Pa. 18840 or email at greg@gregzyla.com.)