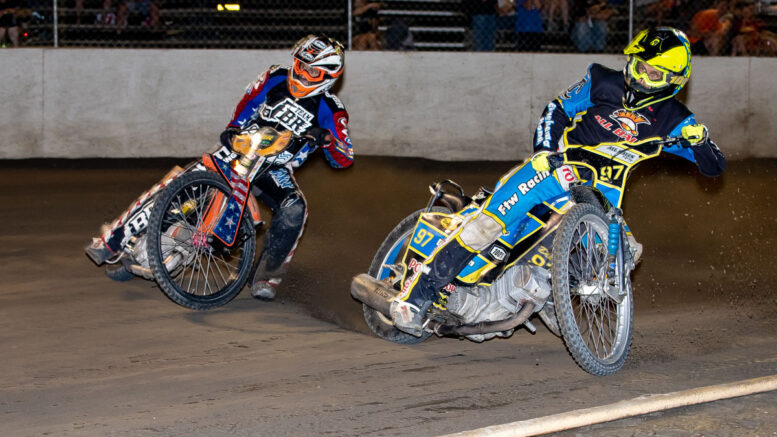 In a dreadful summer of COVID situation cancellations of fairs, concerts and many other fun filled activities, fortunately local legendary racetrack, Champion Speedway, was given the go-ahead to open for racing. After a rainout week on July 11, Champion successfully ran the Hank Bassett Cup and the USSGP RD One on July 18, with a fantastic program of riders and racing.

The Hank Bassett cup pays tribute each season to former 4-Time Track Champion, “Hurricane” Hank Bassett, who lost his battle with MS two years ago. The Eastern United States Speedway Grand Prix Series (USSGP) is the qualifying format now being used to determine the field for the US Open National Championships held each year at the track, and Action Park East on Labor Day Weekend.

The 4 round all scratch format produced some excellent battles and the racing got better and better as the night wore on. Multiple side-by-side 4 laps wars were seen with lead changes at the end that brought fans to their feet.

In the second round of racing, a memorable heat took place between “GP” Jonny Oakden, who was having a superb night but sadly bowed out after a crash in the last heat round, and “Sideways” Spencer Portararo! The pair went side by side nearly the entire race with Portararo, on his Justice Bothers / Arai Helmets / Oury Grips / Terenzi Auto Shop GM taking the win.

Current track Champion Casey Donholt rolled through the heats unbeaten, and Dave Oakden and Brian Hollenbeck only dropped 3 points while going directly to the A Final. A 4-way tie occurred on 8 points for the next two spots between Adam Mittl, Portararo, Jesse Diem and Jonny Oakden. Corey Brookes, who was on 7 points and Dave Clark, also on 7, won the top two transfer spots in a separate runoff to join Mittl, Portararo, and Diem in the raceoff for the last two A Final positions. Jonny Oakden was out with injury.

The raceoff was an incredible race as Mittl jumped into the lead with Clark just behind him for 3 laps. Portararo was way back in 3rd, but never gave up and made an incredible run around the outside to pass them for the win on the final lap! Portararo and Mittl would round out the A-Final as a result.

Five-time track Champion, Mittl, on his Tanks Auto Sales / Joe V’s Auto / Justice Brothers / Arai / Oury Grips GM had last gate choice and was left with the outside, which he used to his advantage to rocket into the lead in the final.

In close pursuit was Donholt on his Jeff Stere / Polito Motors powered JAWA. Mittl rode the perfect line for 2 laps but heading into turn one on lap 3 left too much room on the inside, and Donholt squirted by like a snake oil salesman in the night to take the Hank Bassett Cup Championship! Mittl was second, Portararo third, Dave Oakden fourth, followed by Hollenbeck.

It was a very enjoyable evening for many who needed something positive and fun to do in light of what has been going on in the world! The crowd was respectful of distancing guidelines and there was a really positive buzz afterwards that Champion Speedway is back as the thing to do this summer for locals.

The track will be racing every Saturday night except for Aug. 22 for the rest of the summer, and hosts the US Open Nationals over Labor Day weekend. More information is available at www.eastcoastspeedway.com.

Hank Bassett Cup/USSGP Round One Results:

Because of injuries, Engine failures and points ties, they were left with a perfect number to use for a 5 rider C Final and runoff; but Jonathan Oakden will officially be credited with 9th overall in the USSGP standings as that was an earned position with 8 points.

Be the first to comment on "Champion Speedway kicks of the season!"