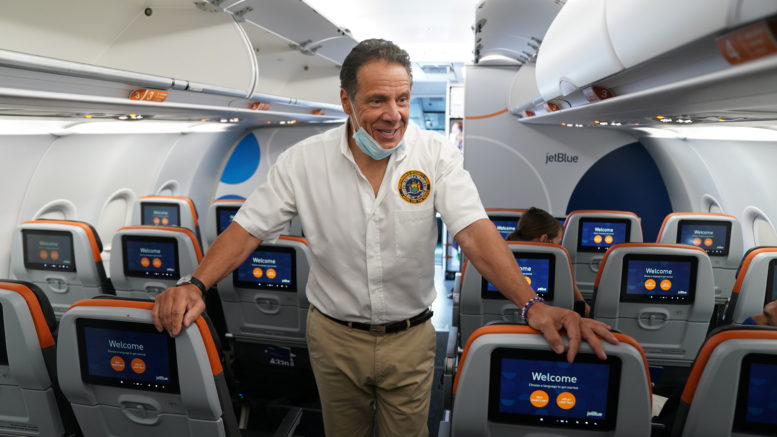 Last week, Governor Andrew M. Cuomo announced that ten additional states meet the metrics to qualify for the travel advisory requiring individuals who have traveled to New York from those states, all of which have significant community spread, to quarantine for 14 days.

“As infection rates increase in 41 other states, our numbers continue to steadily decline, thanks to the hard work of New Yorkers and our incremental, data-driven opening,” said Governor Cuomo, adding, “Yesterday, we had our lowest death toll since the pandemic began – and with no fatalities in New York City. While today’s numbers are encouraging, we must remain vigilant.”

In a press release, the governor also called out to restaurants and bars that encourage young people to congregate.

Governor Cuomo stated, “They threaten to bring us back to the hell we experienced three months ago – yesterday, the State Liquor Authority suspended the liquor licenses of four bars and restaurants. This is a dangerous situation, and the bad operators will make it worse for themselves and everyone, so be smart, wear a mask, stay New York Tough.”

The State Liquor Authority suspended the liquor license of four bars and restaurants – three in Queens and one in Suffolk County. Since the onset of COVID, SLA has brought 410 charges against establishments for violating the Executive Orders and suspended 27 licenses for violations.

The Governor also announced creation of a multi-agency task force to crack down on social distancing violations at restaurants and bars across the state. New York State Police and State Liquor Authority Chairman Vincent Bradley will lead the effort, which will employ real time data to enhance enforcement efforts by rapidly deploying investigators to respond to dangerous social distancing violations as they happen.

Governor Andrew M. Cuomo and members of New York’s COVID-19 task force also departed last week for Savannah, Georgia to help the city in the fight against COVID-19 as it experiences a surge in positive cases and hospitalizations.

In Savannah, the Governor was host to a roundtable meeting with the New York State delegation, Savannah Mayor Van R. Johnson, and the Savannah health care team to discuss best practices to fight the pandemic, including how to set up testing and contact tracing operations.