June 24 was not your classic drive thru experience, but a style that has become better known since COVID-19. The Tioga County Agriculture Research Group hosted a free Dairy Drive at the fairgrounds, and which was open to all county residents.

Trunks were popped and windows rolled down for the 10 a.m. start time. Residents received two gallons of milk, the maximum per vehicle, on a first-come, first-serve basis. Drivers and passengers were asked to remain in their vehicles. No registration or paperwork was required.

A volunteer hands out information to the community at a free Dairy Drive held on June 24 in Owego. (Photo by JoAnn R. Walter)

Milk was acquired through the Coronavirus Food Assistance Program (CFAP). Thanks to CFAP government-funded grants, the American Dairy Association Northeast (ADANE) has been helping distribute upwards of 200,000 gallons of milk during National Dairy Month. ADANE partners with Dairy Farmers of America, the Tioga County Agriculture Resource Group and other community partners. 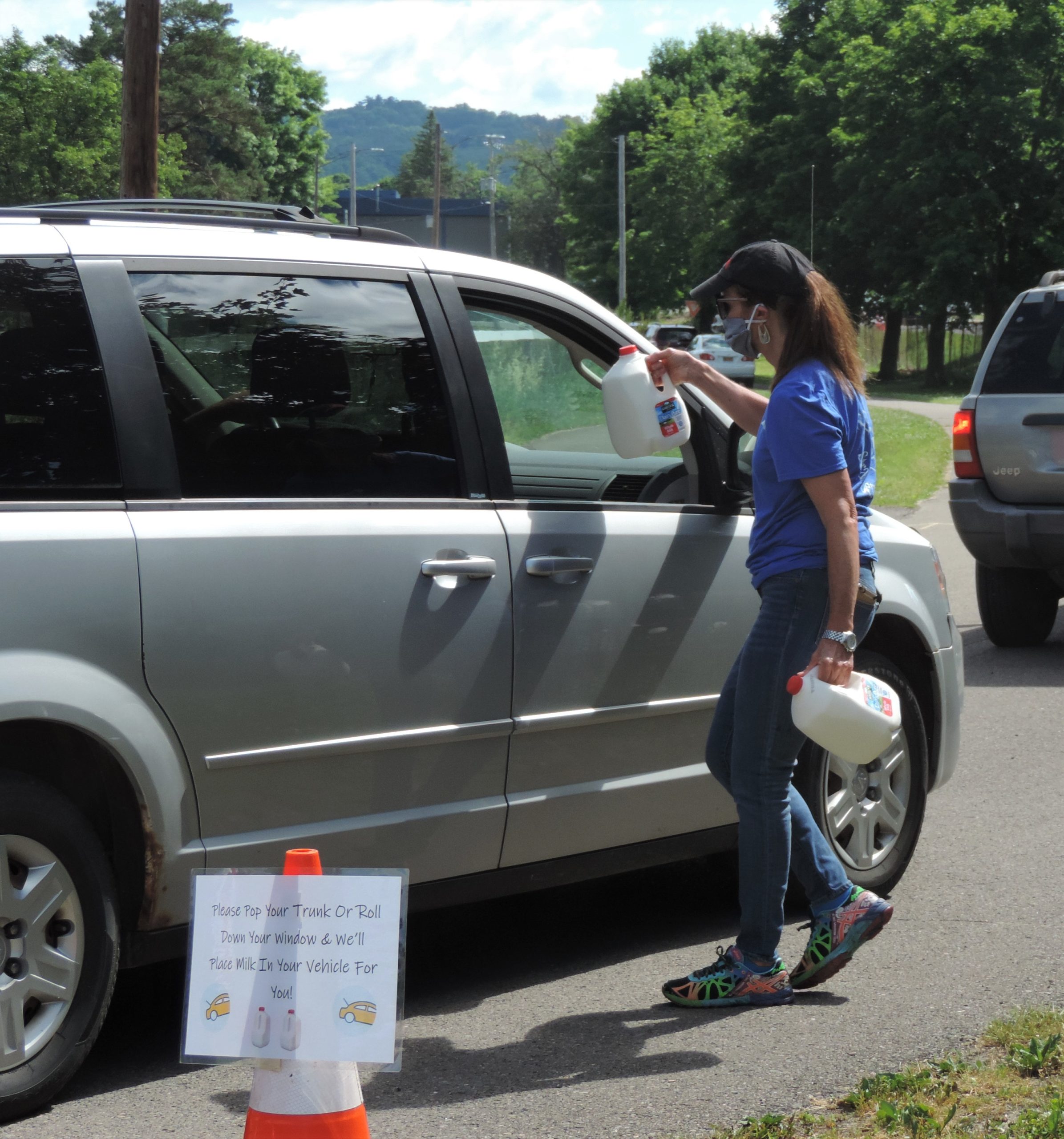 A volunteer extends milk through an open vehicle window at a free Dairy Drive held on June 24 in Owego. (Photo by JoAnn R. Walter)

Miranda Palmer, from the Tioga County Agriculture Resource Group and the Tioga County Soil and Water Conservation District, as well as the Tioga County Farm Bureau, commented that about 250 cars drove through the line at the June 24 event. The turnout was significantly less than a similar event held last month, which brought out nearly 1,000 cars. Palmer attributes part of the difference being that individuals may be back to work.

About 4,000 gallons of milk was dispersed amongst the Owego event and elsewhere. With fewer cars arriving on June 24, milk was then distributed to several area food pantries, schools, and more.

Volunteers and others prepare for a free Dairy Drive held on June 24 in Owego. (Photo by JoAnn R. Walter)

Palmer explained that Tioga County food pantries and schools took as much as they could. To ensure that the remaining milk got out to communities in need, excess milk was extended outside the county. About 13 agencies and schools received milk. 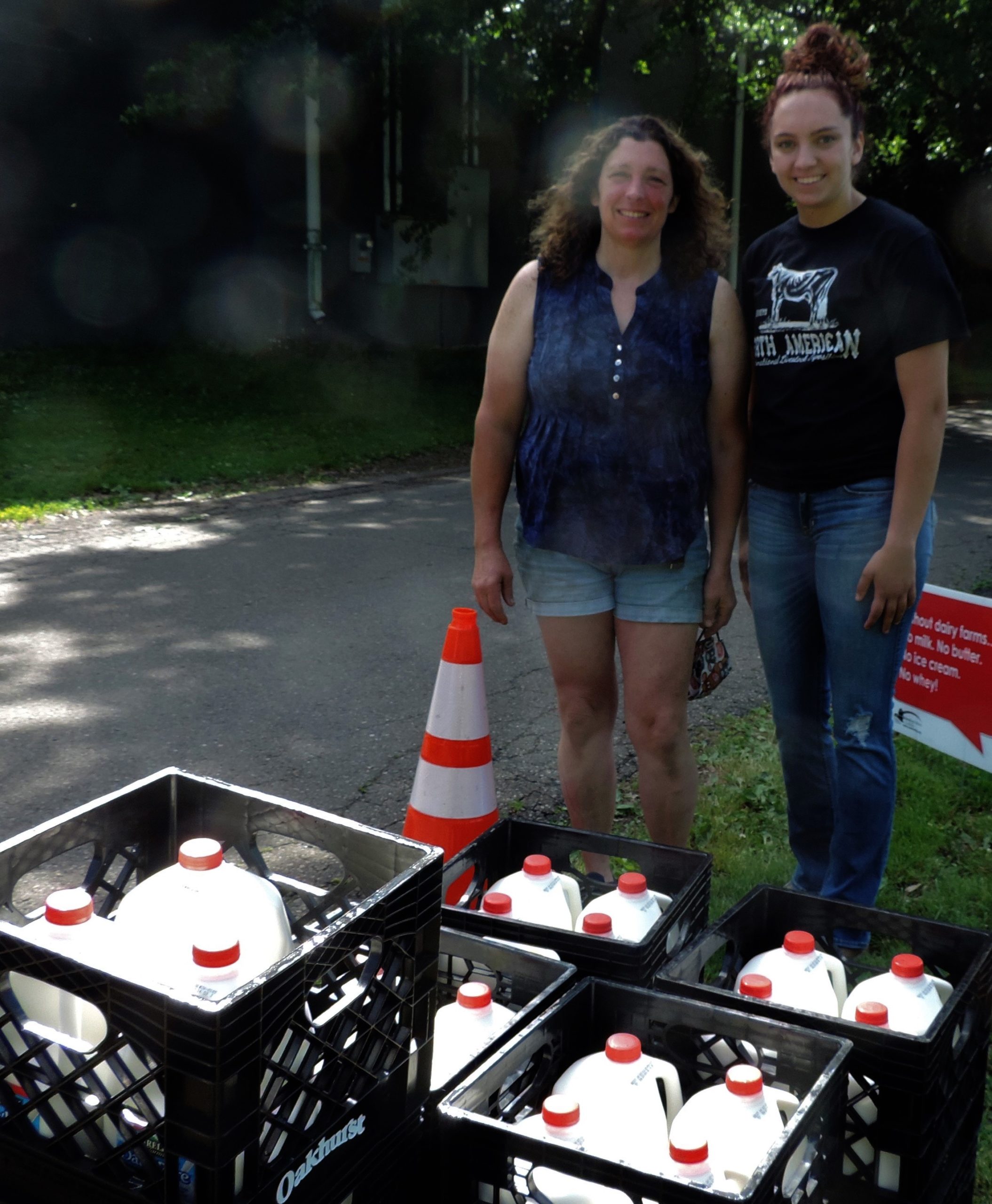 Judy Whittaker, of Whitney Point, N.Y., was one of the dairy farmers who volunteered at the event. Her family’s Broome County farm, Whittaker Farms, has a noteworthy accomplishment, and that of being in operation for more than a century, and since 1915.

For Debbie Lawton and Chelsie Fuller of Lawton’s Jersey Farm, a 180-cow dairy farm in Newark Valley, N.Y., being a part of the June Dairy Drive was a way for them to show good will and to give back to the community.

Lawton remarked, “It’s really good for the soul,” referring to giving back and also receiving appreciation from the community.

Both Lawton and Fuller said that it’s recognition that they may not otherwise receive, since most of their time is focused on the farm.