Family and friends give gifts to five-year-old Wyatt Jones of Owego during a birthday car parade on May 8. Provided photo.

Streets within Owego’s Hallstead Development came alive on the afternoon of May 8 with lights, sirens and horns to celebrate a five-year-old’s birthday.

A car parade for Wyatt Jones was led by an Owego Police Department (OPD) officer and followed by three Owego Fire Department (OFD) vehicles. Several family and friends arrived in separate cars for the birthday-convoy-procession. 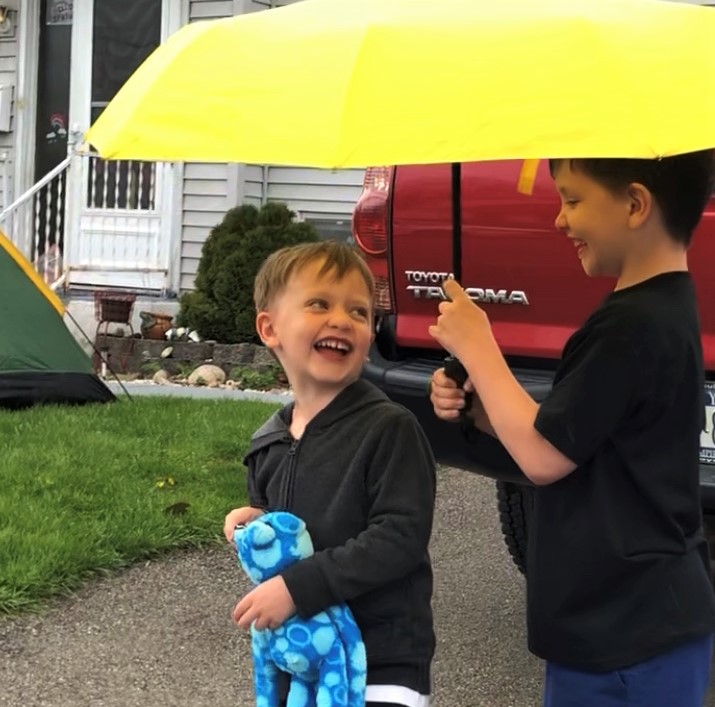 On the left, five-year-old Wyatt Jones of Owego awaits a birthday car parade in his honor on May 8 along with his brother, Elliot. Provided photo.

Wyatt’s mother, Andrea, remarked, “We were blown away by the display of lights and sirens for our son.”

Andrea and her husband Barry, and sons Elliot and Wyatt, have been practicing social distancing.  With nearly everything shut down, Andrea explained that a challenge arose about how to celebrate Wyatt’s fifth birthday apart from the traditional gathering of friends and family.

Five-year-old Wyatt Jones enjoys a birthday car parade in his honor on May 8. Provided photo.

Since COVID-19 has significantly altered routines, popularity for the car parade, a way to celebrate from a distance, has become a safer way to spread love and cheer.

After networking with a neighbor and friends, Andrea put the parade plan into motion.

Keeping the secret until Wyatt’s birthday was a little challenging, however, and then on the day of the car parade, it began to rain.

The Owego Fire Department and Owego Police Department participated in a birthday parade on May 8 for five-year-old Wyatt Jones of Owego. Provided photo.

At first, Andrea commented, Wyatt wasn’t thrilled about going outside in the rain, but with a little convincing from big brother, Elliot, age 8, he turned ecstatic when he realized what was happening.

No rain could stop this car parade, and the plans went off without a hitch. It wasn’t known until the day of the parade if OPD could come, since their participation was contingent on emergencies.

“Wyatt was so excited about the parade, he was laughing and waving,” Andrea said, adding, “We had not seen family or friends for eight weeks. It has been such a dismal time, so this all came at a time when they really needed it.” 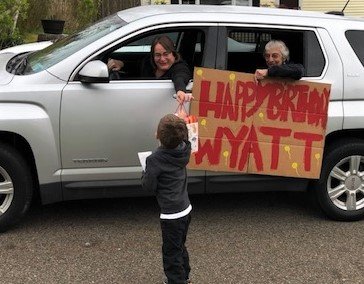 Family and friends, some carrying signs and handing out gifts, participated in a birthday car parade on May 8 for five-year-old Wyatt Jones of Owego. Provided photo.

Andrea shared that her sons have been in good spirits despite the circumstances.  Both are home-schooled and miss the experiences and interactions within their home-school network, as well as with family and friends.  Before the pandemic, Andrea said she ran a co-op called REACH (Recreational and Educational Activities for Children in Homeschooling).

The Jones family moved from Barry’s hometown of Binghamton to Owego six years ago. Andrea grew up in Campbell, N.Y., west of Corning, and met her husband while at Binghamton University.

Andrea remarked, “We really like Owego, it is such a welcoming community. We have the best neighbors and friends, too,” and added, “We also enjoy spending time in the village.”

As for Wyatt, part of his birthday celebration featured ice cream, one of his favorite treats.

To the OPD and OFD, Andrea shared, “We’ll be forever grateful for the memory,” adding, “Thank you for making his birthday so completely wonderful.”

Be the first to comment on "A birthday parade!"