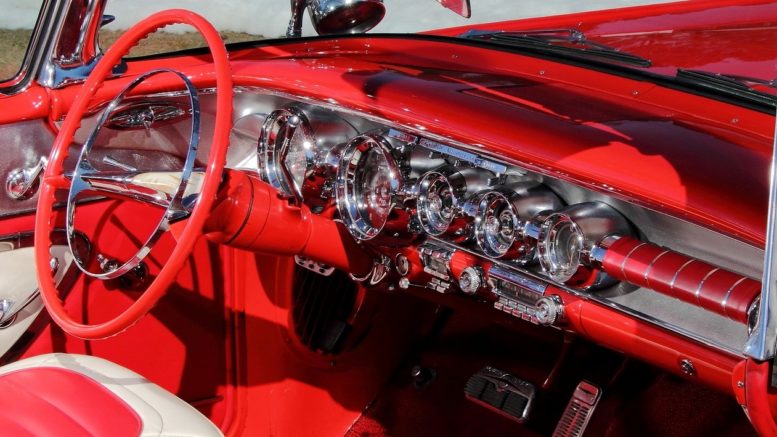 Reader Ralph Herrold points to the beauty of the 1958 Pontiac and its “jukebox” interior dashboard that is loaded with chrome bezels and many buttons. Shown here is a Pontiac Bonneville convertible interior. (Compliments General Motors)

Q: Greg, I love reading your nostalgia car columns but you hit it wrong on your opinion of the 1958 car designs. I feel 1958 was a great year and I would rather have a 1958 Pontiac, Buick or Oldsmobile than any 1957 Chevy.

I feel the 1955 and 1956 Chevys are nice, but the 1957 Chevys are overrated. I also feel that you should take a closer look at the interior and not just the exterior of ’58 cars. If you check the 1958 Pontiac, it features a “jukebox” style dash and the other cars that year also had great interiors. You said the 1958 cars were overrun with chrome and boy were you wrong! The chrome on these cars is beautiful.

I know the article is your opinion, and I feel the 1959 Chevrolet was the ugliest car of the entire 1950-decade. I read your articles in the Bloomsburg Press Enterprise and as I said, enjoy them very much. Thanks, Ralph C. Herrold, Bloomsburg, Pa.

A: Ralph first and most important thanks for your kind words. It means the world to me as I’ve been writing about cars since 1973.

As for your opinion on the 1958 cars, I will agree with you that many had very impressive interiors, including that Pontiac you mention. My opinion about the 1958 cars, overall, had to do with how much weight they all put on, with perhaps Ford being the lone exception. The major differences between a 1957 and 1958 Ford were front-end updates, and headlight (dual) and rear taillight re-designs; but the cars were pretty much the same otherwise. Now if we want to talk a big weight gain, the Lincolns for 1958 were outlandishly large compared to the 1957s, and ditto for Mercury underwent its huge weight gain in 1957.

Over at Chrysler, the 1958 models were also overgrown, but did feature some really impressive interiors like the Chrysler and Imperial models. By 1960, most of the heavyweight 1958 models had all slimmed down and became more stylish, sans Lincoln, Cadillac and Imperial which were still really big luxury offerings.

As for that 1959 Chevrolet you mention with its imposing rear wing design, I’ll admit that when I first saw it I was stunned. Chevy marketing did its best to whet the appetite of Chevy consumers by running commercials on TV with split-second rear wing views and then making a big splash at the dealers when the cars came in all covered up on car carrier trailers. Yet, as the years progressed, I started to like that odd design and today a 1959 Chevy with either a small block 283 or tri-power 348 will bring some big bucks at the auctions. (Station wagons included, and stovebolt-6s too.)

Not surprising is the amount of mail I received from readers about the 1958 column, many with the same opinion as you. I will also admit that for several years, I was looking to purchase a 1958 Buick, as it is my favorite car of that year, followed closely by the 1958 Chevrolet and Imperial. Further, based on the trim selected, a 1958 Pontiac Bonneville convertible is pretty easy on the eyes, while the stripped down Chieftain doesn’t do much for me. Still, I just can’t get over the huge weight gain in 1958.

Let’s end this week’s column with all the cars that were introduced for the first time in 1958, and quite an impressive bunch it is. Included are Chevy’s first Impala, the all-new Edsel, second generation bigger and heavier Ford Thunderbird, first Ford Galaxie, the Packard Hawk (same as Studebaker with different front end), Rambler American and the Studebaker Scotsman.

As for 1958 kudos, the aforementioned Buick and Chevy are worthy; Rambler for staying true to its smaller car designs; Ford for not getting involved in those many outlandish fin creations; Dodge for some nice cars; and finally another two of my favorites, the 1958 Imperial Crown convertible in all its massive beauty and classic Studebaker Golden Hawk.

As for the most homely, these cars come quick to mind in 1958: Studebaker Scotsman, the stripped down Plymouth Savoy, all of the new Edsel cars and wagons, and the gigantic Lincolns following its impressive 1956-1957 design and aforementioned Studebaker Scotsman.

As for your dislike of the ’57 Chevy, you are in the minority on that one!

There you have it Ralph, and thanks again for your letter.

(Greg Zyla is a syndicated columnist who writes weekly about collector cars, auto nostalgia and motorsports. He welcomes reader questions and comments at greg@gregzyla.com or at 303 Roosevelt St., Sayre, Pa. 18840.)