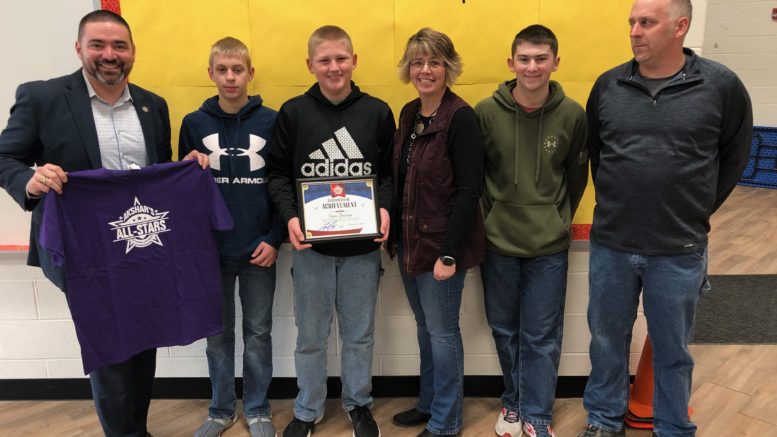 Posted By: Contributed by the Office of Senator Fred Akshar February 12, 2020

Each month, Senator Akshar recognizes local students selected by their school districts in the 52nd Senate District who have shown great leadership, compassion, school spirit or improvement amongst their peers.

For each student recognized as an “Akshar All-Star”, Senator Akshar presents them with a t-shirt, framed certificate and a challenge coin.

At Tioga Central High School, Akshar recognized senior Adeline Whitmore for her kindness, honesty, ambition and work ethic in everything she does. Class valedictorian, Addy also excels on the athletic field, serves as Vice President of the National Honor Society and Treasurer of the Spanish Club. Addy recently earned her Gold Award in Girl Scouts by raising enough money to fully fund a new Veterans Memorial in the Town of Nichols.

At Waverly High School, Akshar recognized junior Rachel Shambo for her strong work ethic, dependability and willingness to take on additional responsibilities and opportunities whenever available. Rachel serves as Division Manager in the school’s Wolverine Den Enterprise and Student Manager for the Ingersoll Rand Federal Credit Union at Waverly High School. A strong student in the classroom, Rachel is also a member of the varsity tennis and swim teams, leadership crew, National Honor Society and is finalizing her EMT Certification through Greater Valley EMS.

At Spencer-Van Etten High School, Akshar recognized Luke Simonton, who was described by his school district as a “consistent, reliable role model and leader.” Luke sets a positive example for the student body and shares his infectious, positive attitude with students and faculty alike. His compassion, perseverance and keen sense of responsibility helped him navigate losing both a friend and a coach within a year. As a senior, Luke kept his cross-country team together as a family and supported them throughout the most difficult times.

At Candor Elementary School, Akshar recognized Ryan Huizinga for his positive attitude, work ethic and his unwavering commitment to helping others. As an active member of the Tioga County Cornell Cooperative Extension 4-H Program, the Flora and Fauna Friends 4-H Club and the Tioga County Giant Pumpkin Club, Ryan has participated in various community service projects, including raising money for the Candor Food Pantry, making pet treats for the animal shelter, making Christmas cards and blankets for nursing home residents and ringing the bell for the Salvation Army. In 2019, Ryan and his brother received the Breeder Award for breeding the Grand Champion Market Hog at the Tioga County Fair.

Senator Fred Akshar stated, “It’s truly a unique experience to be able to shine a light on some of the amazing work and service that’s being done by young people in our community. Whether they’re spending their valuable time with younger students who need a friend or providing leadership to their fellow classmates, it’s important to recognize these bright stars and let their stories be told. In a time when the nation seems so divided, I’m happy to support such a great recognition program that shows the best in our young people.”