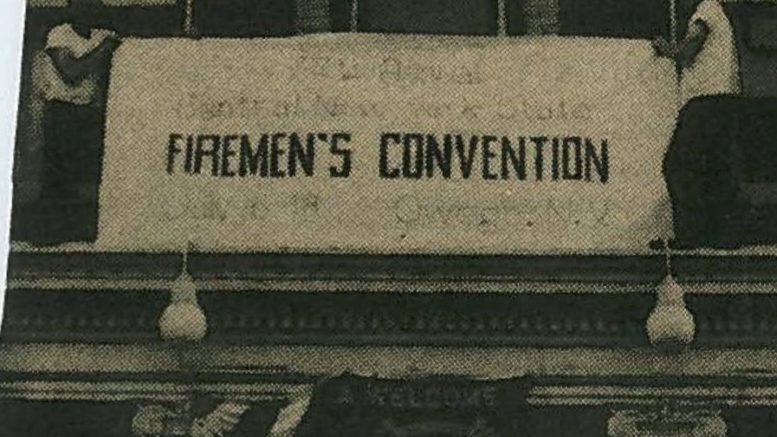 A full weekend of events for the convention is planned. On Thursday, July 9, a welcome reception will take place at American Legion Post #401 with DJ Tommy D of Flat Rat Adventures.

Friday, July 10, will begin with a golf outing at Tioga Golf Club in the morning followed by a block party in the Flats area of the village in front of Croton Hose Co. #3 Fire Station on Talcott Street. Bob Powell Entertainment will be spinning your favorite tunes of today and yesterday at the party.

Firehouse Subs will have their mobile fire food truck on hand. “Fun” firematics between area firefighters will include “midnight run” races, waterball, and garden hose races.

The Broome County Firefighters Association Safety Trailer will be onsite with bounce houses for children. A children’s hose race will also take place. After the block party, fireworks will be held at Draper Park on Front Street in Owego with an after party at the John Barleycorn Tavern featuring the Beatles Band.

Saturday, July 11, will kick off with a memorial service and awards ceremony at the Baker Fireman’s Fountain in the Courthouse Square, followed by fire service meetings at the VFW Post #1371 on Main Street.

Firematic hose races will take place on Main Street between Church Street and Spencer Avenue in the afternoon, followed by a grand firefighter’s parade. Races include the ladder, wye, and straight lay. Cash prizes and trophies will be awarded to hose race and parade winners.

A dinner will conclude the day’s events at the VFW followed by an after party at the Rainbow Trail on North Avenue with music by the Kitchen Sink Band, the Blues Brothers of Central New York, and the Gents.

Owego last hosted the convention that is rotated yearly throughout the state in 2010. CNYFA and the convention hold special meaning for Owego firefighters, as the association’s founding member and first president was Owego’s own Past Owego Fire Chief, Frank M. Baker. Baker also served as president of the Firemen’s Association of the State of New York (FASNY) and is widely known today for his charitable contributions that live on in Owego.

These contributions include the recently restored Baker Fireman’s Fountain donated in memory of his son George H. Baker and the clock tower atop Owego Central Fire Station. This year also marks the 125th anniversary of the Central convention, which was first held in Owego in 1895. Other years that Owego hosted the convention include 1953, 1970, 1987, 1995 and 2010.

The public is invited to participate at all events except the fire service meeting on Saturday morning, July 11.

Convention information, to include registration for the convention golf outing, dinner and parade, are available on the hose team website at www.OwegoHoseTeams.com. Sponsorship opportunities are also available.