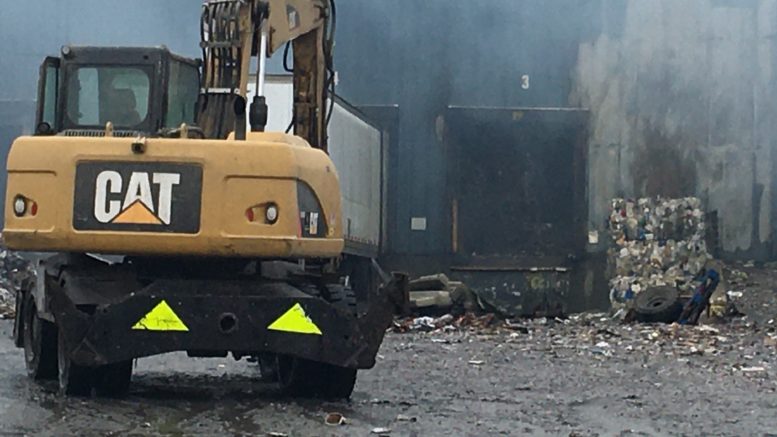 On Friday evening, Jan. 3, firefighters were called out to a working structure fire at the Taylor Garbage Recycling Facility, located on Route 434. Pictured, firefighters were still dealing with the blaze on Saturday. (Photos by Wendy Post)

Hundreds of firefighters, using 56 large pieces of apparatus from 31 departments across Broome and Tioga County, battled what fire officials are calling perhaps the largest fire in the history of the Southern Tier at Taylor Recycling last week. The fire, which took at least 24 hours of dedicated work to knock down, started Friday, Jan. 3. According to Apalachin Fire Chief Mike George, the fire was most likely accidental.

“The building was roughly 30,000 square feet, and a big portion of it is just large open storage space filled with compacted plastics and cardboards. We estimated over 600 tons of material in the building and all of it was effected by fire,” George said.

In a statement from Taylor Garbage, they stated that the fire was most likely started by a cell phone battery that never should have been there to begin with.

“We would like to reiterate that it is very important for the public to understand what materials can and can not be recycled so future incidents like this can be avoided,” Taylor Garbage officials wrote in a prepared statement.

While the facility was a complete loss, the release stated that normal recycling pick-up would continue.

The release also noted that they are in the initial process of getting ready for demolition of the existing structures and will be rebuilding the recycling facility.

“Normal waste and recycling operations and pick up schedules will not be affected; however, if this does change we will certainly let you know immediately,” they added in the release.

As of Monday, Jan. 6, firefighters from multiple departments were still on the scene to ensure that hotspots didn’t reignite into a new fire.

“The folks I’ve been talking to that have been around longer than me say this is the biggest fire in modern Tioga history, maybe for the whole of the Southern Tier,” George said.

In order to get the blaze under control, over 20 water tankers were used, each with a 2,000 to 3,000 gallon capacity, and with constant refilling through the Village of Owego and directly from the Susquehanna River.

For the safety of the firefighters and community, George stated that air testing was done near the site; and that luckily the smoke didn’t spread far.

“If you have any soot or ash buildup wash it, like springtime; if there is a funny smell inside, changing the filter for your furnace will help. However we don’t have specific concerns about the air quality, the wind blew the smoke up in the atmosphere really quickly,” George added.

The State Department of Environmental Conservation will address any environmental concerns.

“The DEC is working with the owner and we can’t comment on that,” George said.

As to the efforts to knock the fire down, George said that he was very proud of not only his guys, but everyone involved.

“We had offers of food and assistance from local businesses and residents for which we were very grateful. And I think that how efficient we were is a testament to the volunteers’ willingness to sacrifice their weekends and all the training they have subjected themselves to. We all worked well together and coordinated seamlessly, I would say it was a phenomenal performance,” George added.

George also noted that through mutual aid, there was never a moment when fighting the fire that he felt he didn’t have enough equipment or the proper equipment.

“Anything we needed, between Tioga, Broome and even the state level, we had,” said George.