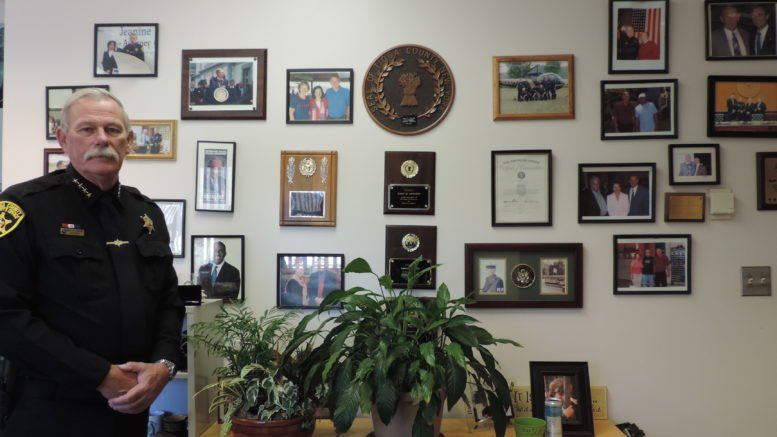 On the eve of becoming Tioga County’s longest serving sheriff, Gary Howard has announced that his upcoming fifth term will be his last. Serving as sheriff for the past 16 years and a member of the Tioga County Sheriff’s Department for the previous 42 years, Howard will be sworn in for his final term on Jan. 2 during a ceremony set for 9 a.m. at the County Office Building, located at 56 Main St. in Owego.

“This will be it, this will be my last term. At the end of (his next term) will be almost 47 years, I think that’s plenty,” Howard said.

Howard, who said that he has a keen fascination with the history of the Tioga County Sheriff’s Department, said that at the conclusion of his next term he would be the longest serving sheriff; the first sheriff in Tioga County was commissioned in 1791.

“When I first started I couldn’t imagine this is where I would be all those years later. I love this county and I love the sheriff’s office, it’s been a wonderful career and I have enjoyed it,” Howard said.

Howard said that he himself went back and made a list of every sheriff that has ever served in Tioga County.

“I love the history for the sheriff’s office, I’ve collected stuff, I’ve got some old badges from a sheriff in the 30s, I’ve got a certificate from the only hanging done in county history from 1880 (framed) and signed from the sheriff at the time,” Howard said.

Starting as a corrections officer, Howard said that over the years he has held nearly every job in the department and is still one of the first people in the office in the morning.

“Corrections, dispatch, supervisor, criminal investigations; I love the people I work with, I love what I do. I don’t even set my alarm for work, I look forward to Monday morning,” he said.

Howard said his love for the job hasn’t diminished as the nature of the position and public perception of law enforcement has changed over the years.

“It’s become a really tough job, new laws and regulations are always coming out. When I went to the police academy it was eight weeks long, now I send a recruit and it’s six months. Shows how much has changed, how much more there is to learn and practice. And when they do get out, we have to have them with a field-training officer for six weeks. When I got back from the academy they just put me to work.”

When talking about upcoming bail and evidentiary discovery reforms set to go into effect Jan. 1, Howard said that he enjoys the challenge.

“For me it’s a challenge, that’s the way I see it; a challenge to get these new laws into effect and train the deputies.”

Despite being such a large part of the history of law enforcement in Tioga County, Howard tried his best to downplay his contributions.

“I don’t see it as a huge milestone for me, you never know the next sheriff might serve six terms, but at the same time it’s cool, this little slice of history for the sheriff’s office.”