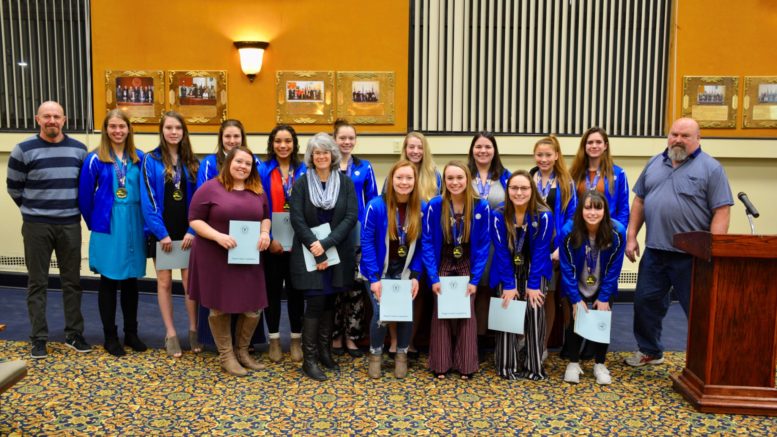 The Legislature recognized Ralph Kelsey for his 22 years of service on the IDA last Tuesday. Provided photo.

During the Tioga County Legislature’s final meeting for 2019, held Tuesday at the Hubbard Auditorium in Owego, they honored Ralph E. Kelsey for his 22 years of service to the Tioga County Industrial Development Agency (TCIDA).

Tioga County Legislative Chairwoman, Martha Sauerbrey stated, “It has been a pleasure to serve with Mr. Kelsey over the years and I thank him for his years of service and contributions to the IDA.”

Chairwoman Sauerbrey stated, “It is an honor to recognize the efforts and accomplishments of our County’s student-athletes and to congratulate this outstanding team on their accomplishment of winning a State Championship.”

The Tioga County Legislature also adopted the County’s 2020 budget, noting this is the ninth consecutive budget year the County has stayed under the State imposed property tax cap.

Chairwoman Sauerbrey stated, “The State continues to place unfunded mandates on local government yet we have been resourceful and successful in complying with the property tax cap mandate.”