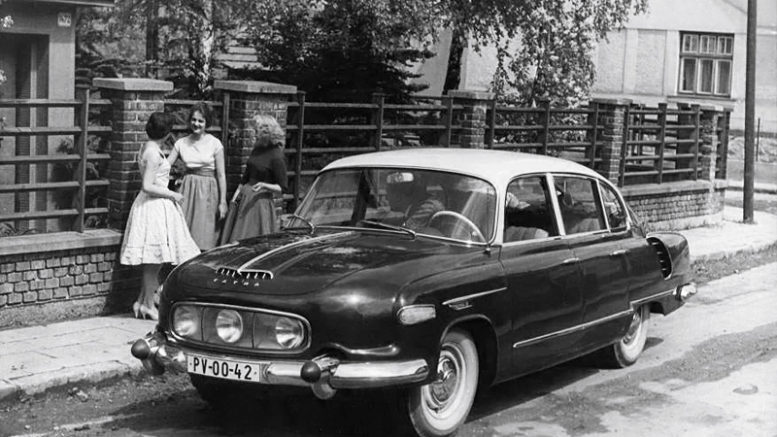 Advertising back in 1962 for the T-603 was similar to the U.S.A. as individuals prepare to enjoy a ride in their new Tatra. (Photo courtesy Tatra)

Q: Greg, I really enjoyed your article on the 1947 Chevy Cadet that never made it to production following World War II. I also remember you wrote of the Tatraplan T-600 many years ago and its unique design. I would like to ask about the other Tatra cars known for ingenuity, namely the Tatra T-77 and T-603. These, too, were ahead of their time. Any info on these Tatra cars is much appreciated. Al K., happily retired near Chicago, Illinois.

A: Al thanks for your kind comments and your question on the Czechoslovakian Tatra automobiles.

Although a noted manufacturer to many auto historians, most readers of this column know little about Tatra cars. Still obscure to the general public, Tatra cars firs appeared back in 1919 but due to the political atmosphere of socialist countries, very little worldwide marketing took place and the Tatra automobiles were utilized by socialist countries behind the Iron Curtain.

In chronological order, we have to go back to March of 1934 for the introduction of the V8 powered T-77 you mention (see attached 3-D style image) and then up to 1947 for the four-cylinder T-600. Both were rear engine designs with streamlined bodies and air-cooled engines.

The T-603, meanwhile, was introduced in 1956 and sold through 1975. The T-603 was also a rear engine V8 air cooled design, but the front suspension was now the MacPherson strut design mentioned in the Chevy Cadet column back in August.

Known for its excellent suspension systems and roomy passenger quarters, the 1934 T-77 and its sibling bigger V8 T-77a came with a well designed four-wheel independent suspension These T-77s weighed nearly 4,000-pounds, which is not surprising as many 1930 decade cars were gigantic in size. Perhaps best known as the first rear engine, air-cooled streamliner, the Tatra 77 is a highly respected vehicle even to this day.

The smaller ’47 T-600, meanwhile, came with a 1952cc inline four-cylinder also placed in the rear between the axle. The body had a coefficient aerodynamic drag of 0.32, which was great for that era. Not surprisingly, the T-600 was produced in much greater numbers than the T-77, and both have an interesting history. During World War II, Tatra was instrumental in the production of trucks and tank engines for the German war effort, and many distinguished political, military and education/art hierarchy individuals owned Tatra cars.

Following the war, a total of about 4,200 T-600’s were sold from 1947 through 1951. Then in late 1951, the Czech Department of Defense, which controlled the production of the cars, informed Tatra they would now build trucks and that any further car production would move over to its Skoda brand. Skoda was one of the other car companies in the country at the time, and also run by the government. The third car company in the Czech Republic was called Praga.

Then, in 1954, Tatra was allowed to re-join car building with a new, larger passenger car with a new air-cooled V8 engine and rear transaxle developed. The Hemi V8 T603-engine had previously been developed and tested on the racetrack in Tatra experimental race cars and then officially used for the Tatra-603. This new 603 went on sale in 1955 and remained in production until 1975. In its 18 years of sales, a total of 20,422 T-603’s were built and some were exported to USA and Canada. It is rumored that the late Cuban President Fidel Castro owned an all white T-603.

Always interested in motor racing, the T-603s took part in 24 international races and 79 overall race events from 1957 to 1967. The T-603 teams won 60 times for an outstanding record against cars in its specific class. (No, Tatra didn’t beat any Ferrari or Maserati racecars at any time.)

Although we only zero in on three of Tatra’s automobiles, this company is still in the business today and doing well in the heavy duty truck business. Currently, a Tatra T-815 is exported to the United States and Brazil. The T-815 and T-815-6 Force Tatra trucks are popular with fire companies that need extra heavy-duty fire-fighting trucks.

Some trivia? The person who designed the German based Zeppelin airships, namely Paul Jaray, also designed the Tatra T77 automobiles. The Zeppelins are sadly best remembered for the 1937 horrible crash landing of the Hindenburg Zeppelin in Lakehurst, N.J. and viewed by millions on YouTube. The crash killed 36 people when the Zeppelin’s hydrogen gas was hit with static electricity during a bad weather docking and ignited instantly.

Thanks for your question Al and I hope this all helps. There are more modern day Tatra vehicles to see at www.tatratrucks.com.

(Greg Zyla is a syndicated auto columnist who welcomes reader inquiries on collector cars and auto nostalgia at greg@gregzyla.com or at 303 Roosevelt St., Sayre, Pa. 18840.)