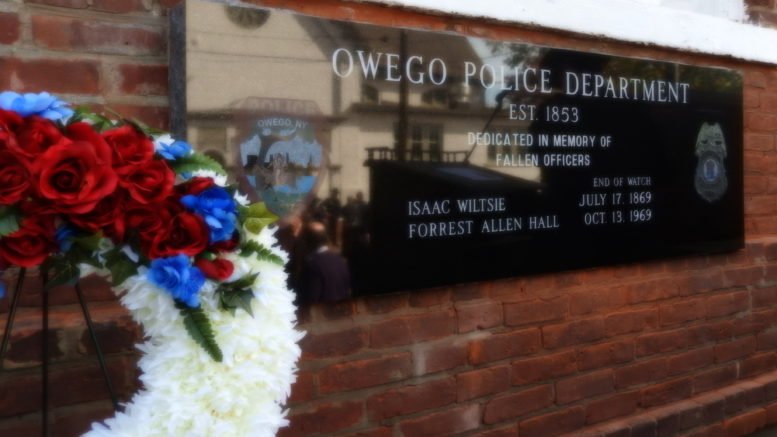 On Oct. 13, law enforcement officials gathered at the Owego Police Station on Temple Street to dedicate a memorial, pictured, in honor of two fallen Owego police officers, Isaac Wiltsie and Forrest Allen Hall, both killed in the line of duty 150 and 50 years ago, respectively. (Photo by Wendy Post)

Last Sunday, Oct. 13, law enforcement officials gathered at the Owego Police Station to dedicate a memorial in honor of two of their own, Isaac Wiltsie and Forrest Allen Hall, both killed in the line of duty 150 and 50 years ago, respectively.

Officer Isaac Wiltse, who served at one time as Owego Police Chief, was shot and killed when he approached suspects in connection with several burglaries in the village. His last watch was July 17, 1869. He was 50 years old.

On his last watch, Officer Hall was actually off-duty and sitting in the police station when a call came in to check out an incident in the vicinity of Chestnut Street and North Avenue. Hall was shot and lost his life in the line of duty on Oct. 13, 1969. Officer Hall, age 23 at the time of his death, was a 1965 Owego Free Academy graduate and married for less than five months.

The department honored the officers with a stone memorial, displayed outside the police station located on Temple Street in Owego.

Law enforcement agencies throughout the Southern Tier were all in attendance to pay their respects. Also in attendance were the Blue Brothers, a motorcycle club based out of Binghamton and Candor. The 75-rider club raised over $2,000 to benefit the memorial during their Fallen Officers Ride, which is held each year in June.

Several dignitaries attended the event as well, to include Senator Fred Akshar, who stated, “[The officers were killed] just over a block away from where we are today.”

Akshar stated that he thought of the officers that were lost, and the sacrifices made. “We should thank their families,” said Akshar.

Marte Sauerbrey, chair of the County Legislature, also spoke. Sauerbrey addressed guests, stating, “I’ve worked with many officers. You never know when they will come back; so thank you for honoring them.”

The Village Mayor, Mike Baratta, and Don Castellucci, Town of Owego supervisor, both addressed guests and presented proclamations designating Oct. 13, 2019 as a day to honor fallen police officers that made the supreme sacrifice for both the Village and Town of Owego, specifically Hall and Wiltse. Dean Morgan, deputy supervisor, read the Town’s proclamation for guests.

Joshua Nytch, president of the Fraternal Order of Police Lodge 99, addressed guests as well, stating, “Law enforcement is more dangerous than ever before.” He did, however, note that officers today have better equipment and better training than they used to.

The sacrifices, however, are not lost.

“There is no greater call than laying down your life in service,” said Nytch, adding, of the ceremony, “We do this to honor their service.”

A classmate of Hall’s, Fran Dunbar also addressed guests, noting that they went to Owego Free Academy together, and worked at IBM together. Dunbar shared some fun memories, especially about their shared love of fast cars.

Following remarks, John Hitchings and Fran Dunbar unveiled the monument while bagpipes were played and a blessing rendered.

Prior to the ceremony, and at 1 p.m., a gathering took place at the gravesite of both Wiltsie and Hall, who now rest in Owego’s Evergreen Cemetery. A reception was also held at Owego’s VFW Post 1371 following the ceremony.