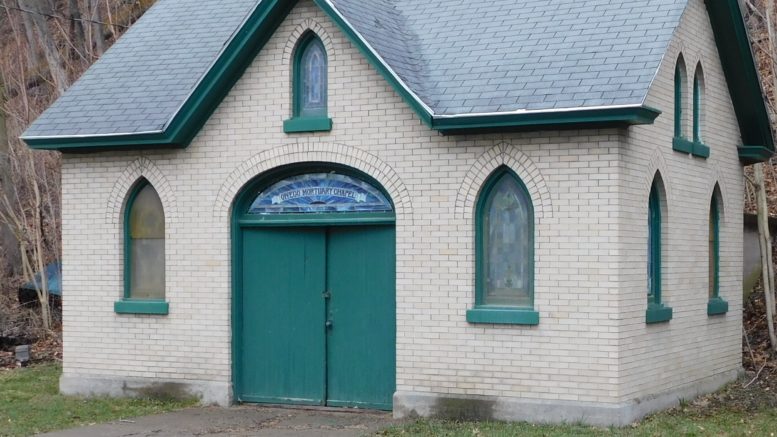 On July 1, 1911 in the offices of the Honorable Frank Baker, the Cemetery Commission had its first meeting. Frank Baker was elected President, John Anderson was named Vice President, Lewis Leonard took on the role of Treasurer, and Emory Watson was the Secretary, which had a salary of $50 annually, by vote.

The minutes of the Cemetery Commission, which can be viewed in the Tioga County Historical Society Museum in two volumes, first mention the construction of a chapel and receiving the vault for Evergreen Cemetery on Tuesday evening, Dec. 31, 1918, when $2,000 dollars was requested for general maintenance and for building a new vault and chapel in the year 1919.

On Feb. 8, 1919, a special meeting of the Commission was called to authorize the purchase, for $100 received from Isabell and Jane Bailey, a 100-foot strip of land to be used as a site for the Chapel and Vault. A special meeting was also called on March 10, 1919 “for the purpose of letting the contract for building a chapel and vault just West of the old receiving vault on land purchased from Jane and Isabell Bailey.” The receiving vault was necessary to contain the remains of individuals who could not be buried when the cemetery was inaccessible, especially during the winter months.

Samuel Randall, representing Randall Bros., came to the meeting with plans to build a brick veneer structure (brick to be determined by the Commission) measuring 16’ x 24’ with a concrete vault (15’ x 20’) attached to the North side of the chapel and a 10’ wide concrete apron extending to the street.

The leaded glass windows were not to cost more than $1.50 per square foot. The construction lumber was to be drawn from lumber stacked and sawn in the cemetery. The Commission would be responsible for the site prep. The total cost for the building was not to exceed $3,200 and the completion date was set at Nov. 1, 1919.

Today, to repair the lovely stained-glass windows, they have a bid of almost $7,000. And to restore the chapel and put on a new roof would cost almost $20,000.

Be the first to comment on "When was the Evergreen Mortuary Chapel built?"