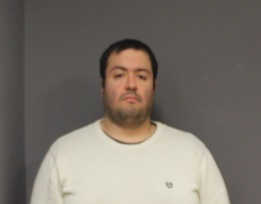 The Endicott Police Department reported the arrest of a Binghamton man on Thursday, March 7, 2019 after an investigation into an incident that occurred between January and March of this year, which revealed that the individual had subjected a minor to sexual contact.

James R. Finsel, age 38 of Pennsylvania Avenue in Binghamton, was charged with one count Sexual Abuse in the First Degree, a Class D felony, for sexual contact with a victim less than 11 years old.

The investigation is continuing.