Several hands work to place and secure items inside the train table at Guthrie Medical Group in Owego. (Photo by JoAnn R. Walter)

Students in Stephen Lindridge’s technology class at Candor High School worked diligently throughout the 2017-2018 school year to complete an extraordinary project, a replica of the Owego Courthouse Square and surrounding area that also features a functional train. The project, a train table, is now on display at the Guthrie Clinic located at 1246 State Route 38 in Owego.

The project was made possible by a grant from the Floyd Hooker Foundation as well as donations from Curbel Plastics of Syracuse, Carol James of Ducktown, Tenn., and Angela Spaulding of Candor, among others. 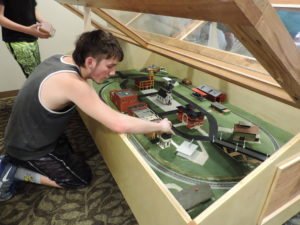 Pictured is a Candor student placing items in the train table at Guthrie Medical Group in Owego. (Photo by JoAnn R. Walter)

On hand to receive the train table on June 14 were Director of Practice Administration at Guthrie Sherry Salisbury, and Senior Director Shawn Karney.

Approximately eight students worked on the project where they utilized CAD programs, table saws, sanders, 3D printers and laser cutters, among other tools and equipment.

Lindridge shared that he is extremely thankful for the generous donations toward the project and hopes to continue the effort in future years. This marks the second train table completed. 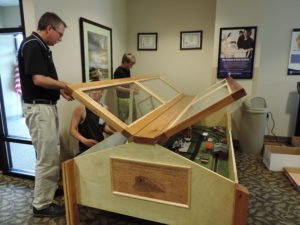 Pictured in the foreground is Stephen Lindridge, a technology teacher from the Candor School District. High School students built a train table during the school year, a replica of historic Owego, and recently delivered it to the Guthrie Medical Group located on Route 38. (Photo by JoAnn R. Walter)

He added, “There were many skills and lessons learned, too, although problem-solving was one of the most significant.”

Karney, who has had a lifelong model railroad interest, is pleased that Guthrie was selected as the recipient of the train table, and shared that patients and visitors will benefit from its location, and remarked, “It also represents the history of the railroads in our area.”