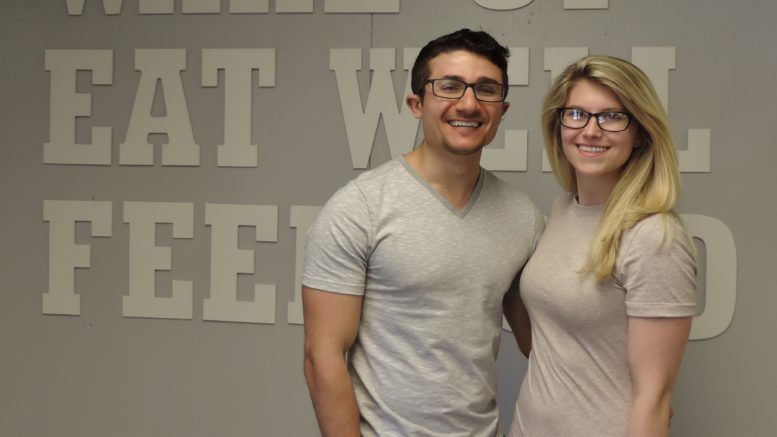 Pictured are Keegan Evans and Nicole Bergmann, co-owners of a new business, Wake Up Waffles, based out of Nichols, N.Y. With 11 grams of protein per waffle, their product is gluten free, low calorie/low sugar and is catching the attention of customers all across the U.S. For information, visit wakeupwaffles.com or find them on Instagram and Facebook. (Photo by JoAnn R. Walter) 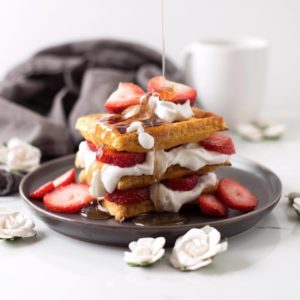 Pictured is a photo of a strawberry shortcake dessert, and made with handcrafted waffles from a new business based out of Nichols, N.Y., Wake Up Waffles. Find them on Instagram and Facebook, or visit wakeupwaffles.com. (Provided photo)

A new business based out of Nichols, N.Y., Wake Up Waffles, has transformed Keegan Evans and Nicole Bergmann’s idea of making healthy eating easier into a bustling business that ships out customer orders to all corners of the United States.

Keegan and Nicole started making their own homemade Belgian-style waffles, a one-of-a-kind recipe they created themselves, about three years ago when they first embarked on what they called, “Our fitness journey.”

The result, a packed-with-protein, gluten free and low calorie and low sugar product contributed positively to the couple’s active, healthy lifestyle and fitness routine, and since has caught the attention of consumers who also yearn for healthier food options.

With 11 grams of protein per waffle, that component is a major draw, and primarily from the 18-35 age group and fitness enthusiasts. Keegan and Nicole commented that the product is also appealing to the gluten-free community, individuals who are changing up eating habits under medical advice, along with other reasons.

Their “Wake Up, Eat Well and Feel Good” mantra, along with their catchy business name, is creating a stir, and, they shared, “We are pleased to have a loyal customer base.”

Customers are re-ordering, too, which prompted the couple to consider a loyalty program, which will be introduced soon.

Unable to ship across country borders, Wake Up Waffles does have Canadian fans; a recent visitor ordered waffles ahead of time to take back home.

Inspired to start their own business when they realized that their type of waffle product was unavailable elsewhere, and with a desire to share it with others, Wake Up Waffles was born. Keegan and Nicole said they were inspired, too, by Dough Bar Doughnuts, a maker of protein doughnuts and treats who were featured on the ABC television show, “Shark Tank.”

Both Owego Free Academy graduates, Keegan in 2011 and Nicole in 2012, and newly engaged, the couple both agreed that entrepreneurship wasn’t originally on their radar.

Keegan, a Wells College graduate with a degree in computer science and his own photography business, and then Nicole, with a degree in radiologic technology from SUNY-Broome, had been working in their respective fields, before, as Keegan called it, “We got the entrepreneurial bug.”

With an initial boost from a crowd funding website, the couple launched the business in December of 2016.

To start, they rented space at two other local bakeries where, baking during off-hours, and many times during the wee hours of the morning, they tweaked their recipe and worked on flavor variations.

By the fall of 2017, they were ready to find a permanent home, and following a month’s worth of renovations, they officially started running in December.

Keegan’s background has lent to building their own website, along with shooting food photography, and both are appreciative of the guidance extended by Tioga County Economic and Planning and the Industrial Development Agency.

Now producing thousands of waffles per week, and with the help of part-time personnel, as well as family and friends, the couple explained that most orders “Come through Instagram.” Influencer marketing as well as word-of-mouth and other social media exposure has continued to grow the brand. A future goal for the couple is to see their product available for purchase in major stores, but for now, it is one step at a time.

Wake Up Waffles features three flavors, including vanilla cookie, chocolate chip and confetti, while producing seasonal or specialty variations like red velvet, cinnabomb and pumpkin spice. And not just for breakfast, Wake Up Waffles are promoted as a quick snack before going to the gym, or as a dessert with creative toppings, such as using waffles in lieu of biscuits to make a healthier version of the classic strawberry shortcake.

All orders are processed on-line. For local customers, order on line and arrange a pick-up at the Nichols location, or drop by the Owego Kitchen on Lake Street for a “Grab & Go” box.