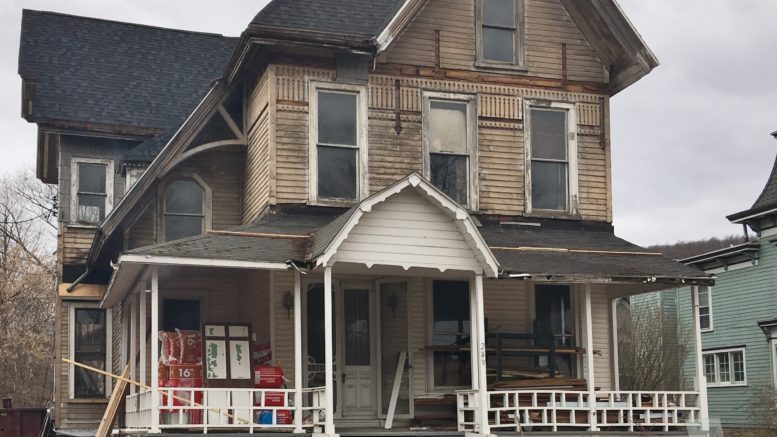 Pictured is the future Belva Lockwood Inn, located at 249 Front St. in Owego. Renovations are ongoing, and the owners anticipate opening by the fall of 2018. (Photo by Wendy Post) 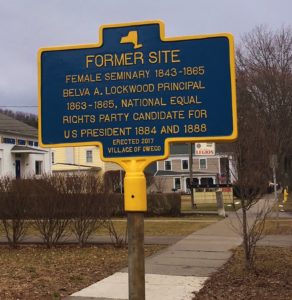 Pictured is an historic sign at 249 Front St. in Owego, which was updated last year. (Photo by Wendy Post)

More than 150 years ago, an ambitious woman named Belva Lockwood, with an education degree in hand, embarked on a new career at 249 Front St. in Owego and became the principal of the then Owego Female Seminary from 1863 to 1865.

Today, Julie and Ike Lovelass, along with Ike’s father, Lester, are starting a new chapter of history with their own ambitious qualities, by transforming the Front Street property, located just a few hundred feet east of the Church Street intersection, into the Belva Lockwood Inn. The Lovelass’ also own and operate the Owego Kitchen on Lake Street.

Julie commented, “I am fascinated by Belva Lockwood’s story, and part of this whole journey is to share it.”

Belva Lockwood studied law in the 1870’s, a noteworthy accomplishment for a woman of that time period, and then lobbied Congress to pass an anti-discrimination law to give women the right to practice in any federal court. Lockwood became the first woman to practice before the Supreme Court after President Rutherford B. Hayes signed the law in 1879. Lockwood is also known to have authored several articles about the women’s suffragist movement. 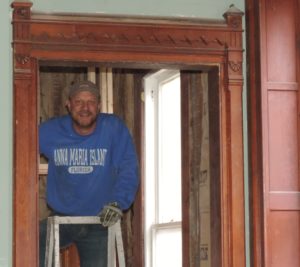 Pictured is Ike Lovelass, working at 249 Front St. in Owego. Julie and Ike Lovelass, along with Ike’s father, Lester, are starting a new chapter of history by transforming the Front Street property into the Belva Lockwood Inn.  (Photo by JoAnn R. Walter)

A notable fact, Lockwood ran for President of the United States twice, once in 1884 against Grover Cleveland, and again in 1888, opposing Benjamin Harrison, which, last year, prompted County Historian Emma Sedore, to suggest that the historic marker located outside 249 Front St. be updated to honor Lockwood’s accomplishments. It has since been changed.

Sedore pointed out, too, that Lockwood was so well respected that three communities in the United States were named for her – Belva, West Virginia; Lockwood, California; and, a little closer to home, Lockwood, N.Y.

The U.S.S. Belva Lockwood, a WWII merchant liberty ship, was named for her, and one of three figureheads of Lockwood is carved on a ship now displayed at Connecticut’s Mystic Seaport museum.

Inside the future Belva Lockwood Inn are ornate hinges and doorknobs, original fixtures that will remain during renovations. (Photo by JoAnn R. Walter)

Lockwood did return to Owego in 1909, when she was welcomed back during what was called “Old Home Week,” and where she was a special guest speaker.

The Lovelass’ first toured the property in October last year.

Julie commented, “When we walked in, we felt an immediate connection.”

By November, the purchase was finalized, and with Ike and Lester managing a majority of the work today, along with the help of local tradesmen, progress has been moving right along.

Not to be confused with a bed-and-breakfast, Julie explained, “This will be a luxurious inn with hotel-style amenities, and also boutique-like linens and other accessories.”

The inn will feature five individual rooms with queen-sized beds and private baths, one with a claw foot tub and the rest with showers. One disabled-access room will be located on the first floor, and a ramp will be built for access into the house.

Finished rooms will be named the “Hiawatha Island Room,” a room that overlooks the river and features a fireplace, along with the “Glass Room,” which will showcase creative glass artistry by a local artist, and the “Eagles Room,” a nod to the Fraternal Home of the Eagles Club who used the house during the mid-1900’s. 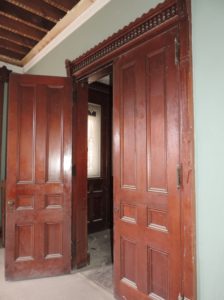 All floors inside were found intact and will be restored, Julie said, and, in addition, she is pleased that original doorknobs and other antique fixtures, like door hinges, still exist at the property. Detailed woodwork encompasses the trim around the windows, and several doors are original to the house. Other doors, architecturally salvaged, and specialty-crafted items will be added. Several glass chandeliers are also part of the lighting plan.

Water damage from a leaky roof caused the plaster molding to be compromised, and the front porch, an add-on from a more recent time, will be rebuilt.

Another notable fact, an underground tunnel was found in the basement of the home, which is presumed, but not confirmed, to be part of an escape route, and similar to other homes in the area.

The Belva Lockwood Inn is expected to be open by the fall of 2018. With a full kitchen on-site, catering for special events will be offered such as rehearsal dinners, small weddings and bridal showers, just to name a few, and will accommodate upwards of 50 people.

Pictured is an image of 249 Front St. in Owego, as it looked when it was the Fraternal Order of the Eagles. (Provided Photo)

A liquor license for both the Inn and the catering business will be applied for, and reservations will be taken by summer.

Another level of excitement, the Inn will be featured in an upcoming segment of the HGTV series, “Hunting Vintage,” to be aired in late spring.

Julie commented, “We appreciate the support of the community,” and added, “It’s been nice to see people walk by and look, or slow down when they drive by.”