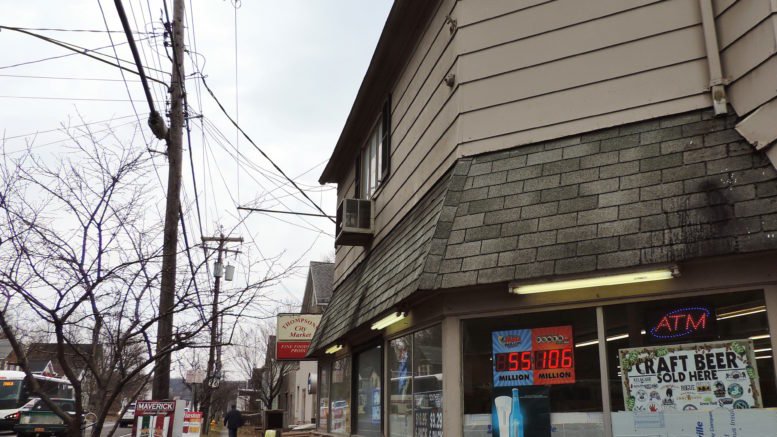 Thompson’s Grocery, located at 229 North Ave. in Owego, closed its doors on April 21 after 70 years of service to the community. The grocery store has been a fixture on North Avenue since Ray Thompson purchased the property in 1947, along with generations before that. (Photo by JoAnn R. Walter) 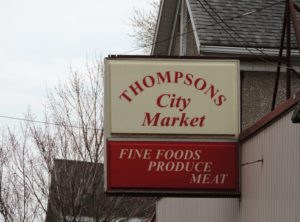 Thompson’s Grocery, located at 229 North Ave. in Owego, closed its doors on April 21 after 70 years of service to the community. (Photo by JoAnn R. Walter)

Thompson’s Grocery, located at 229 North Ave. in Owego, closed its doors on April 21 after 70 years of service to the community. The closing is a bittersweet and emotional ending for owner David Thompson who picked up the torch from his father, Raymond, in July of 1996.

The grocery store has been a fixture on North Avenue since Ray Thompson purchased the property in the late 1940’s, along with generations before that.

According to the Owego Daily Record of Nov. 13, 1905, it stated, in part, “An inventory is being taken today of the stock in Charles Van Gorder’s grocery on upper North Avenue, so that the new firm of Lovejoy & Hulslander, comprised of Thomas Lovejoy and his brother-in-law, Charles Hulslander of Candor, may take possession tomorrow.”

Ray explained that those were the days when baskets of produce were left outside on the sidewalk near the front door, and where huge bags of sugar and flour were dumped into large bins so customers could scoop and measure up as much as they needed to bag and carry home, or travel home by horse and buggy.

For David, who Ray said first started getting involved in the store’s activities at the young age of four by doing simple tasks like sorting bottles to return to a distributor, and from that made a few pennies per case to save for fun, the closing is a sad occasion. David regrets having to tell four employees that they will lose their jobs.

David also said his business, along with others like it, including three in the immediate area that have had roots in Owego for many years, “Don’t get the community support they deserve.”

Ray, who recently celebrated his ninetieth birthday at a party held at the nearby Rainbow Trail, holds fond memories of Owego. He attended grade school at the former Talcott Street School and graduated high school in 1945.

As a young man, Ray said he held a paper route, and where, from the $2.15 he made, he gave $2 to his mother to help with six children at home. Pocketing 15 cents for himself, Ray said that for ten cents he could see a John Wayne movie on a Saturday afternoon, and then have a nickel left over for a glass of Coke.

Ray recalled railroad towers in Owego that were manned by operators for the Lehigh Valley and DLW lines. Ray said two trains a day went by, and like clockwork, you knew what time it was.

In and around “The Flats,” Ray pointed out, there were several other groceries. Ray reminisced about names such as Foster’s, Ringwald’s and Red & White, and even mentioned a woman who sold groceries out of her living room, just around the corner from Thompson’s.

“Back in those days, too,” Ray commented, “You either worked at Endicott-Johnson, Stakmore or in dairy farming,” or, like himself, took on the challenge and rewards of running his own business.

For Thompson’s beginnings, it all started with a $600 loan for a down payment, and for which he said his father co-signed, an early-IBM employee. Ray explained that he paid $104 a month for six months to repay the loan.

Ray chuckled, “That was a lot of money in 1947.” Eventually, in 1950, Ray was able to expand the business with an addition, followed by other growth phases.

The year 1950 was also the year Ray married his wife, Beatrice; they had two sons, David and Thomas. Beatrice was a teacher at the Tioga Center School, but opted to leave the education field to work at the store, and where she worked with Ray for over 50 years. Ray also found time to participate with the fire department and ambulance crew, along with the Elk’s Club. Beatrice passed away in 2009.

Ray explained that local business owners all had to adjust and adapt to changing times, too, one of the most significant events being the North Avenue underpass construction. The project impacted Ray’s business for upwards of 12 to 18 months, making access to the store more challenging for customers.

Another major event, the flood of 2011, left devastation in Owego and throughout the region; however it was Thompson’s Grocery that was there to help their neighbors, and one of the only local stores that was able to remain open during the critical days before recovery began.

The Thompson’s also regularly supported its community by offering donations to area organizations, and was the go-to-store for quality fresh meat used at many local restaurants. A landmark in the area, the closing of the store brings back fond childhood memories for many who grew up here or still live here.

Ray said he has no regrets about jumping in to run the grocery business. As an ambitious, young businessman, he said he worked hard seven days a week, and acknowledged that his son followed well in his footsteps.